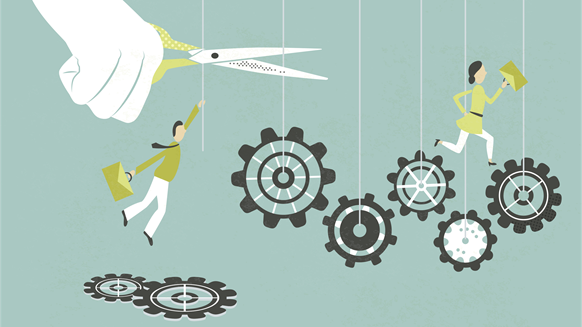 92% of UK subsea companies will recruit less people than they did 12 months ago, according to a survey by industry body Subsea UK.

Ninety-two percent of UK subsea companies will recruit less people than they did 12 months ago, according to a survey by industry body Subsea UK.

Around 90 percent of respondents have seen sales decrease in the last 18 months. Of those, 28 percent saw sales drop by 30-40 percent and a further 28 percent have lost half their revenues with sales decreasing by 50 percent or more. Although 80 percent felt that the financial institutions had lost faith in the sector, only 5.7 percent were looking to refinance and 7.7 percent were actively seeking new investment.

Around 80 percent of respondents hope to drive growth by increasing overseas sales and exploring new markets with a focus on Asia, the Middle-east, North America and Africa. Other countries of interest are Australia, China, Brazil and Norway, according to the survey.

More than 44 percent of respondents said that the ‘lower for longer’ oil price environment has led to the industry becoming more receptive to new ways of working and adopting different techniques and innovations. Almost 80 percent of those asked are still investing in new technology and see this as an area of focus in the long-term to secure future growth.

“Our survey shows that subsea companies are increasing their export efforts, exploring new geographic markets where their services and technology are in demand,” said Subsea UK chief executive, Neil Gordon, in a statement sent to Rigzone.

“The industry is more receptive to new ways of working and new technologies and we are starting to see the benefits of real collaboration towards reducing costs and driving efficiencies. It is encouraging that, against this backdrop, subsea companies are continuing to invest in the development of new technology,” he added.

The majority of respondents believe that technologies which lower cost and risk, while increasing efficiency are vital for the future. Respondents believe that technologies that will have the most impact in the future will relate to subsea processing and storage, condition monitoring/inspection, repair and maintenance, decommissioning, data gathering and interpretation.

Subsea Companies “Well-Placed” For the Future

“The decline in oil price and subsequent industry-wide downturn has seen a massive reduction in CAPEX and OPEX budgets worldwide which have impacted on the subsea sector where we are seeing job losses and the collapse of companies, putting the UK sector’s enviable world-leading position under threat,” said Gordon.

“The findings from our survey underline the negative impact on revenues and recruitment but they also reveal positive signs of the sector adjusting and adapting to the lower for longer oil price environment which will ensure we are well-placed for the future,” he concluded.

Following an oil price crash which saw Brent drop from over $100 per barrel in 2014 to under $30 per barrel a few months ago, the value of oil has steadily increased over the last few weeks. At the time of writing, Brent hit 2016 highs of $52.51 in a development which FirstEnergy stated would “hold”.

The $13 billion UK subsea industry, which has been helping recover more hydrocarbons from the North Sea since the 1980s, employs around 50,000 across the country. Subsea UK’s 300-strong membership represents the majority of the subsea companies in the supply chain.