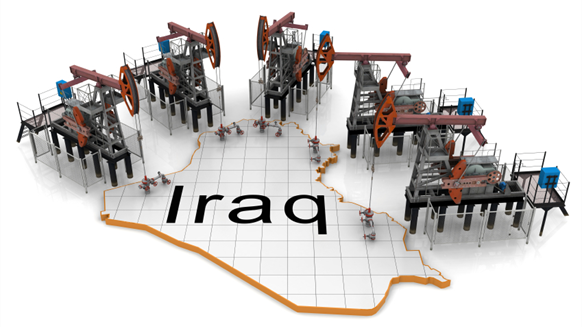 Iraq is sticking to an aspiration to increase its oil output by up to a third by 2020 despite warnings from some companies working in OPEC's second-largest producer that projects could be delayed due to spending cuts.

LONDON, May 24 (Reuters) - Iraq is sticking to an aspiration to increase its oil output by up to a third by 2020 despite warnings from some companies working in OPEC's second-largest producer that projects could be delayed due to spending cuts.

Iraq is pumping about 4.5 million barrels per day (bpd) now and is aiming to boost that to 5.5 million to 6 million bpd by 2020, Falah Alamri, head of Iraq's State Oil Marketing Organisation (SOMO) said at an Iraq oil conference on Tuesday.

"If there is good investment and the investment is available for the next years, I have no problem with that," he said in reference to the target. "We will not decrease our production; it will continue growth but slowly."

A collapse in oil prices, which at $49 a barrel are less than half their level of two years ago, has hit revenue for Iraq and other producers, and last year prompted Iraq to downgrade a more ambitious goal to expand supplies.

The price drop has raised concern that Iraq's oil output growth could slow, or stall. Indeed, oil companies have warned Iraq that projects will be delayed if the government insists on drastic spending cuts this year.

But Iraq has managed to keep increasing its output so far, despite more pessimistic predictions.

Last year, the country was the fastest source of supply growth in the Organization of the Petroleum Exporting Countries, boosting output by more than 500,000 bpd, despite spending cuts and conflict with Islamic State militants.

With its finances stretched, Iraq has asked foreign oil companies to rein in their budgets for a second year in a row. Royal Dutch Shell, which is in charge of Iraq's Majnoon field, has been cutting costs by reducing foreign staff.

"We are doing our bit," said Marcus Antonini, Shell's country chairman for Iraq, adding that the company had roughly halved its expatriate workforce in Majnoon and planned further reductions.

"This allows us to make significant savings on operating expenditures," he told the conference, saying the reduction in foreign workers had not hit output at Majnoon, which was producing 220,000 bpd.

Alamri, who is also Iraq's OPEC governor, said a glut in the market is easing and Iraq was seeing a rise in demand for the crude it exports from the south - Basra Light and Basra Heavy.

He dampened expectations that OPEC, which meets to set policy on June 2, will agree any steps to support prices, having shifted policy in 2014 to focus on maintaining market share.

"There is a lot of demand in summer, more consumption now than the beginning of the year," he said. "After two years, the market is starting to balance but it nearly destroyed many countries."

Oil companies in Iraq have to clear spending with the government each year and are then repaid with oil produced from existing fields. With the price collapse, Iraq has been struggling to find enough oil to repay them.