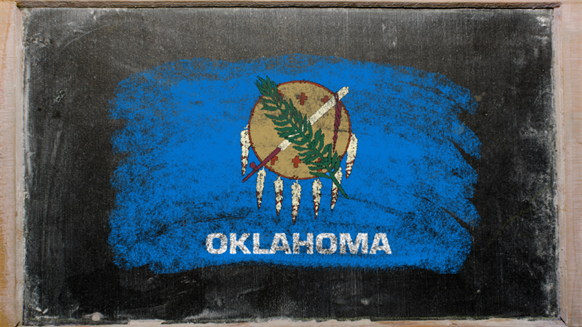 After intense lobbying, Oklahoma's oilmen scored a victory two years ago. State lawmakers voted to keep in place some of lowest taxes on oil and gas production in the United States - a break worth $470 million in fiscal year 2015 alone.

NEWCASTLE, Okla., May 17 (Reuters) - After intense lobbying, Oklahoma's oilmen scored a victory two years ago. State lawmakers voted to keep in place some of lowest taxes on oil and gas production in the United States - a break worth $470 million in fiscal year 2015 alone.

The state's schools haven't been so fortunate. In Newcastle, 23 miles from the capital of Oklahoma City, John Cerny recently learned that the school attended by his five-year-old granddaughter, Adelynn, will open just four days a week next year. The Bridge Creek school district will slash spending because of a projected $1.3 billion state budget shortfall next year.

Beth Lawton teaches first grade at Broadmoore Elementary in Moore, a city of 59,000 bordering the capital. In April, she and several colleagues were told their contracts won't be renewed because of funding cuts. Broadmoore's class sizes are expected to rise next year as a result.

"I think our lawmakers have failed us, and I don't understand how little they value education," Lawton said.

Oklahoma's school-funding crisis is part of the pain inflicted by falling oil prices on energy-rich states across America that rely on natural-resources taxes to pay their governments' bills. But the crisis in Oklahoma is especially dire, exacerbated by a legacy of large tax breaks bestowed upon oil companies.

Before the recent 60 percent decline in oil prices, a drilling bonanza minted millionaires and billionaires in Oklahoma. The boom turned sleepy Oklahoma City into a thriving hub for drillers like Devon Energy, Chesapeake Energy and Continental Resources - the troika that lobbied hardest for the tax-break extension. The rebuilt downtown hosts top notch dining, hotels, arts venues, and a top NBA basketball team.

But as private oil wealth created these emblems of prosperity, public services have come under severe strain. In contrast to other energy states, Oklahoma didn't fill state coffers during flush years.

Oklahoma taxed new oil and gas production from its prolific horizontal wells - the big money-makers of the fracking industry - at rates as low as 1 percent throughout the shale boom. In North Dakota's giant Bakken oilfield, the going rate was 11.5 percent.

The state actually began cutting back on funding for Oklahoma school children before the bust, and education funding is likely to contract much further, said Ryan Owens, a co-director at the Cooperative Council for Oklahoma School Administration, a professional association of educators.

"Oil was $100 a barrel, and we still had less money per student," Owens said. "We had an opportunity and we missed it."

Shale regions are hurting across the country. Since 2014, the U.S. energy industry has shed more than 100,000 jobs. But during the drilling spree of 2008 to 2014, oil-rich states like North Dakota and Texas saw a sharp rise in oil-and-gas tax revenue and salted away a chunk of it for education. Over the same period, Oklahoma's oil and gas production tax revenue slid 32 percent, in spite of soaring oil prices and a doubling of oil output.

"The state legislature can't help when oil and natural gas falls," said David Morrow, the Bridge Creek schools superintendent. "What has got the state of Oklahoma, in my opinion, is everything we gave away."

Oklahoma lawmakers voted on Thursday to eliminate a separate subsidy for the worst-performing wells in order to help plug the budget gap. While barely utilized during the boom years, the cost of that tax credit grew to more than $130 million in 2015, as sinking prices made more wells unprofitable.

Overall, Oklahoma's $3 billion education budget has been cut by $58 million since January. Though next year's funding remains uncertain, the state's projected 18 percent budget deficit has schools preparing for the worst.

Mike lasko  |  May 20, 2016
Amongst other things, the US will have to open its immigration doors wide as that is where the educated will be coming from. Outside the country, not from inside.
RELATED COMPANIES
Company: Devon Energy more info
Company: Chesapeake Energy Corporation more info
Company: Continental Resources, Inc. more info