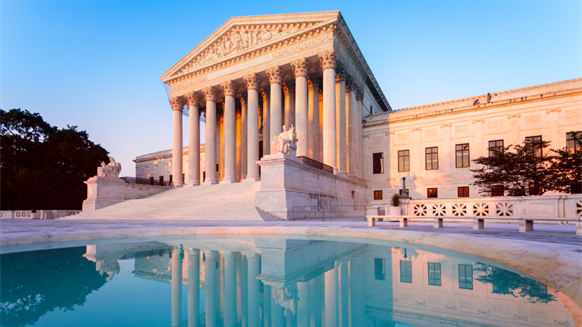 The US Supreme Court rejects Exxon Mobil's appeal of a $236 million judgment against the oil company in a case brought by the state of New Hampshire over groundwater contamination linked to a gasoline additive.

WASHINGTON, May 16 (Reuters) - The U.S. Supreme Court on Monday rejected Exxon Mobil Corp's appeal of a $236 million judgment against the oil company in a case brought by the state of New Hampshire over groundwater contamination linked to a gasoline additive.

The justices left in place the New Hampshire Supreme Court's 2015 ruling upholding the judgment by a jury that in 2013 spurned Exxon's claims that the contamination linked to its fuel additive was not its fault but rather the fault of the local gas stations and storage facilities that spilled it.

Exxon argued in its appeal that its due process rights were violated because New Hampshire had not proved the company's liability for the alleged pollution at each individual site.

The additive at the center of the case is called methyl tertiary butyl ether, or MTBE. It is an oxygen-containing substance that was added to gasoline to promote more complete combustion and reduce air pollution.

It was one of several additives that had been recommended by regulators to reduce emissions but has now largely been phased out of the U.S. fuel supply because of the hazard it poses to groundwater.

New Hampshire's lawsuit against Exxon, headquartered in Irving, Texas, dates back to 2003.

State officials called the $236 million judgment the largest MTBE-related verdict since states and other agencies began making claims for remediation and other damages. Exxon said in court papers it is the largest-ever jury verdict in New Hampshire.

In 2014, Exxon also appealed to the U.S. Supreme Court a $105 million jury verdict in favor of New York City over MTBE contamination, but the court declined to hear the case.

(Reporting by Lawrence Hurley; Editing by Will Dunham)