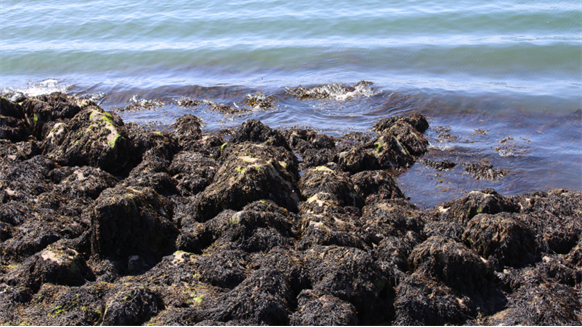 Ireland’s hydrocarbon sector is attracting an array of oil and gas industry giants in its 2015 Atlantic Margin Oil and Gas Exploration Licensing Round, with eight companies receiving new acreage in the southern Porcupine Basin as part of the first phase awards. The second, and final, phase of awards is scheduled for mid-May and will see a range of new acreage awarded to a variety of oil and gas exploration and production firms.

“The response to the round has been extremely positive, with 43 applications for Licensing Options received by the deadline of September 2015,” said Joe McHugh, the Minister of State at the Department of Communications, Energy and Natural Resources, in a government statement released Feb 11.

“This is by far the largest number of applications received in any licensing round held in the Irish offshore. At a time of very low oil prices the strong interest in the round is very positive,” McHugh added.

“Ireland is a place that [oil and gas companies] ought to be interested in. It’s got great geology and amongst the best fiscal terms in the world,” Europa Oil & Gas CEO Hugh Mackay told Rigzone.

In addition to praising the technical aspects of the country’s flourishing oil and gas sector, the Europa frontman claimed that if oil is found offshore Ireland, then “significant and long-term employment” would follow as a result.

“For long term employment prospects with a large workforce permanently employed, it’s during the development phase and that’s what could be transformative for Ireland,” Mackay said. “If we find something, from discovery to production, seven years is the average. So a lot of jobs, a lot of work initially on construction. Once the fields go into production, there’ll be significant and long-term employment during the lifetime of the field and then up to and including the decommissioning. As well as the people that are directly employed, there’s all the ancillary work that goes with this, whether that’s environmental, helicopters or port facilities.”

“Significant Investment” For Ireland Lies Ahead

Mackay is optimistic that the latest Atlantic Margin Round will lead to the creation of a major new hydrocarbon province.

“It sounds like there’s going to be significant investment in seismic acquisition this year on the licenses that have already been awarded. And then with the licenses that are going to be awarded in May, there’ll be more seismic being acquired for those and out of that may come exploration drilling activity. I would imagine by the end of the decade we may have some discoveries and be thinking about development and that will be transformative,” he said.

During the first round of awards, Europa Oil & Gas received a licensing option which it had already mapped on proprietary 3D seismic that was acquired during 2013. Europa has identified three new prospects on its newly awarded LO 16/2, which have combined gross mean un-risked prospective resources of 895 million barrels of oil equivalent (boe), according to a company statement released March 2. Including LO 16/2, Europa now has a 100 percent interest in an estimated 3 billion boe of gross mean un-risked prospective resources across its licenses and licensing options in the South Porcupine Basin.

The next steps on LO 16/2 will be to invest in further technical work to mature the three identified prospects to drillable status, according to a Europa statement in March, and deliver a competent persons report on the asset later in 2016.

Echoing Mackay’s views on the future of Ireland’s oil and gas industry, Providence Resources plc Chief Executive Tony O’Reilly also told Rigzone that the latest licensing round would lead to the creation of a new hydrocarbon hub, which would result in lots of work offshore Ireland.

“The results of the round far exceeded everyone’s expectations both in the number of new license holders as well as the calibre of the companies securing new acreage,” said O’Reilly.

“The first phase of the round saw licensing options being offered to companies including ExxonMobil, Statoil, Nexen (CNOOC), Woodside, Eni and BP and it will be interesting to see who the new holders will be when the second phase of the Licensing Round is announced in May 2016,” he added. 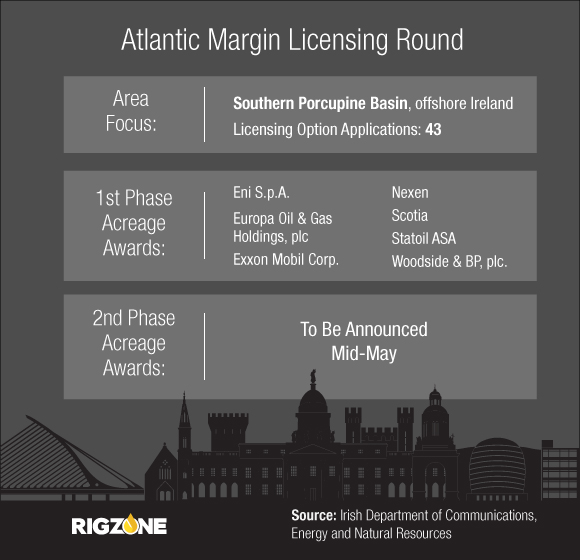 O’Reilly expects “major drilling campaigns” to be undertaken as part of the Licensing Round within a few years and revealed that Providence Resources is already looking at “multiple drilling (exploration and appraisal) opportunities” offshore Ireland.

Providence Resources was the first licensee in the Porcupine Basin in 2004. The energy firm holds interests in licenses all over Ireland, including the Celtic Sea Basin, the Kish Bank Basin, the Goban Spur Basin, the St. George’s Basin, the northern Porcupine Basin and the southern Porcupine Basin. The company currently has “multiple assets” ready for drilling, O’Reilly said. Off the west coast of Ireland, Providence expects to drill its 58-percent owned Spanish Point appraisal project, operated by Cairn, and the Dunquin South, Drombeg/Druid and Newgrange prospects, which have estimated P50 resources REC in excess of one billion barrels of oil equivalent each, across 2017 and 2018.

Looking ahead to the next decade, O’Reilly predicts that Ireland’s offshore oil and gas sector will achieve significant growth.

“We see a very much expanding oil and gas sector, with a great deal of activity planned in the years ahead,” said O’Reilly.

“Already, in the past 6 months, we have seen some major changes. The commencement of production from the Shell-operated Corrib gas field in December 2015 represented the first new exploration and production asset to be developed in over 30 years. This was followed by the huge success of the Licensing Round, which is another major new step change for Ireland and this should result in far more wells being drilled in the years ahead. Ultimately, the speed by which Ireland’s offshore oil and gas industry expands will depend, not only on oil prices, but also the success of future drilling campaigns. But with success with the drill bit, Ireland’s proximity to the North Sea and its interconnectivity to mainland Europe ensures that it has both the technical and service capabilities and markets to sell future production,” he added.

Putting to bed fears regarding the effects of a low oil price on Ireland’s flourishing oil and gas industry, O’Reilly stated that even “in this current price and cost environment, Ireland is internationally competitive.”

The Providence Chief Executive highlighted that “current applicable tax rates in Ireland [range] from a base of 25 percent to 55 percent” and stated that the sustainability of the Irish oil and gas sector is “equal to or better than the North Sea arena,” under current conditions.