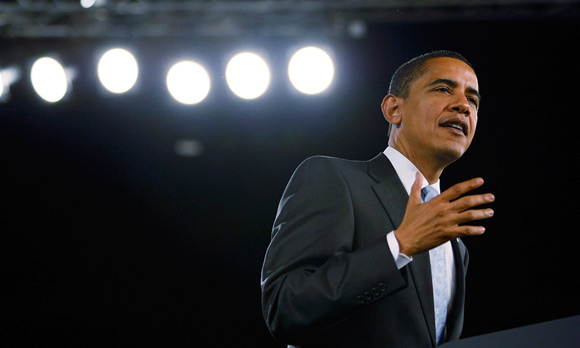 (Bloomberg) -- President Barack Obama defended his proposal to levy a new $10-per-barrel tax on oil, arguing that low gasoline prices afford the U.S. an opportunity to finance dramatic improvements in its transportation systems.

"Right now, gas is $1.80 and gas prices are expected to be low for the forseeable future," Obama told reporters at the White House. It’s "important to use this period when gas prices are low to accelerate the transition to a clean-energy economy," he said.

The proposed fee drew swift objections on Thursday from oil-industry groups and congressional Republicans. The idea is part of a broader Obama administration plan to shift the nation away from transportation systems reliant on internal-combustion engines and fossil fuels. The plan envisions investing $20 billion to reduce traffic congestion and improve commuting, $10 billion for state and local transportation and climate programs and $2 billion for research on clean vehicles and aircraft.

"We’ll have a much stronger economy, stronger infrastructure, we’ll be creating the jobs of the future," Obama said.

It isn’t clear how the tax would be structured or who would pay it. White House officials said it wouldn’t be assessed at the wellhead. Exported oil wouldn’t be subject to the tax, though Obama misspoke during his remarks and said it would. Jeff Zients, director of the National Economic Council, told reporters on Thursday that the White House expects oil companies would pass on some costs of the tax to their customers.

He said he plans a larger speech on the oil tax "and the direction we need to go on this."

Michael Taylo  |  February 11, 2016
So, everything is cut in half right? I mean, all the outrageous prices of airline tickets, beef, vegetables, shipping, anything to do with oil, or any product that used oil in the manufacturing of, paint, tires, make-up...was blamed on high oil prices. So now everything is cut in half right? Airline tickets are now half price....beef prices are cut in half....everything is cheaper!! YAAAAY! WRONG! Whats the excuse now?
Ron  |  February 08, 2016
As always, OBAMA is attempting to make matters worse for the US Oil industry! At low energy prices like this, it almost certainly makes alternative energy sources difficult to compete in a global economy. Pres. Carter initiated the Windfall profits tax to penalize the oil companies from earning full potential on their investments. Did it achieve the desired outcome? No!. Will this measure achieve its desired outcome? Doubtful! When government attempts to manipulate free enterprise, it always backfires and ultimately costs the tax payer more in the long run. Government needs to tend to government, and let free enterprise do its business,
john weaver  |  February 08, 2016
You cant fix stupid. If you come in at 10 and go out at 10 , this is the old oil , nes oil scenario .results are how much ? Our POTUS has stupid people around Focus on the deficit and not on the Blacktop roads
michael mclaughlin  |  February 07, 2016
It is always interesting that we have this gigantic highway system of roads and bridges and yet the GOP cannot find a way to pay for it except cut social programs. When bridges start falling down, and they will, I guess the GOP will blame Obama and liberalism.
Ronald Rich  |  February 06, 2016
That's not taking advantage of anything but people's already shrinking pocket books
John Moran  |  February 06, 2016
I cannot believe the stupidity of this man. He wants to take advantage of these low oil prices to put the tax on. The oil producers in this country are barely hanging on right now.... this would put 90% of them out of business immediately. This man is certifiably stupid.
Tommy S.  |  February 05, 2016
This really gives new meaning to the saying..Kick-em while theyre down! Two million and counting worldwide unemployed over the last one and a half years and this is the best he can come up with? Please tell me hes not going to teach economics to our children when hes retired. I remember digging ditches with the best of them back when we got ourselves into this mess in the seventies, but Ill have to pass on the opportunity to work on the road crew this time around. Although I have to concede the point that he definitely needs to work on the infrastructure on the country.. Ill even go so far as to be the first to sign up to run his solar / battery / extension cord driven bull dozier, ( perferably a D9 or larger) but please take into account that it only works when the wind blows hard or the sun shines!