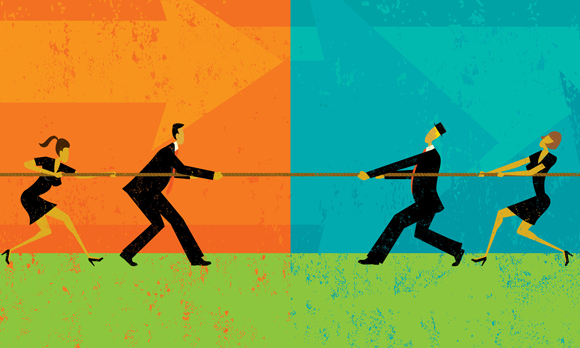 Despite being a potentially hydrocarbon-rich region, the prospects of developing oil and gas resources in the South China Sea have often fluctuated with the state of relations among protagonists in the territorial dispute. The latest flare-up in the spat resulted from growing concerns among key players to China’s reclamation program in the region.

The reclamation work – which Rigzone reported earlier citing U.S. estimates provided by The Wall Street Journal – comprised an expansion of artificial reefs in the Spratly Islands to 2,000 acres of land compared to 500 acres in 2014. The island-building program in the South China Sea has become a major regional concern as it transformed “semi-submerged reefs into forward bases with airfields fit for military use” by China.

Bloomberg reported Nov. 22 that the reclamation program was focused primarily on the Spratly islands “within waters that carry about 30 percent of global trade. China is building as many as three airstrips there, prompting concern in the U.S. that its actions will provide it with military bases and risk hindering the free movement of shipping.”

“The island construction work that is creating vast amounts of new acreage … with buildings, harbors and, most importantly, runways appearing in recent months ... The bases could have a ‘significant impact on the local balance of power’ by helping bolster the forward presence of Chinese coast guard and navy forces,” Euan Graham, director of the International Security Program at the Lowy Institute in Sydney, Australia told Associated Press in an article published in Indonesian daily Jakarta Post Dec. 6.

China’s territorial claims – based on its “nine dash line” – cover more than 80 percent of regional waters, bringing its boundary near to the shores of rival claimants Brunei, Malaysia, the Philippines and Vietnam.

The United States, while not directly involved in the territorial feud although bound by a defense treaty with the Philippines, has repeatedly emphasized that ships should have freedom of navigation in the waterways. Washington has also urged China to stop land reclamation in the area where $6 trillion in sea-borne trade passes through annually, Singapore’s Business Times reported Nov. 24.

Aside from the rights of passage through regional waters, the availability of hydrocarbon resources and fisheries in the contested area further contributed to the South China Sea imbroglio as sovereignty confers ownership of the embedded petroleum resources. According to the U.S. Energy Information Administration, the South China Sea contains approximately 190 trillion cubic feet of natural gas and approximately 11 billion barrels of oil.

One of the most visible responses to China’s recent reclamation work in the South China Sea was undertaken by the U.S. military. 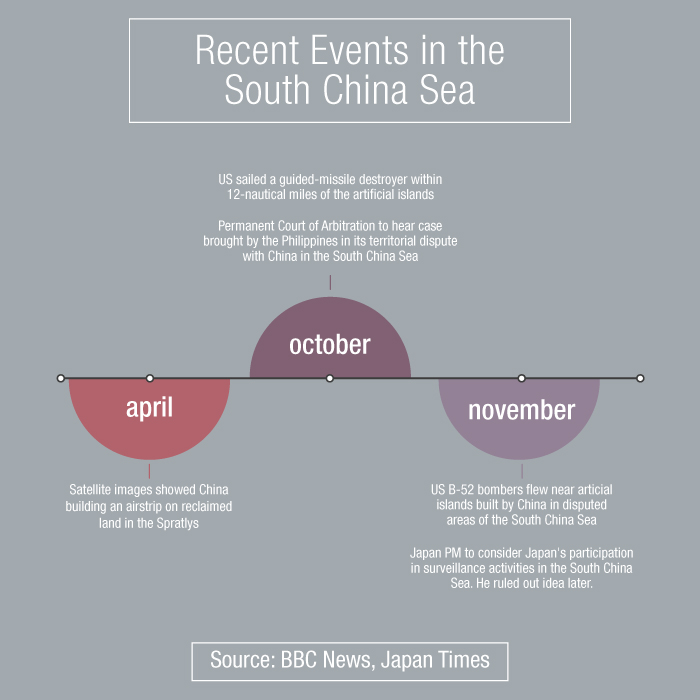 
BBC News reported Oct. 28 that the USS Lassen guided-missile destroyer breached the 12-nautical mile zone around the Subi and Mischief reefs in the Spratly archipelago a day earlier as part of the country’s Freedom of Navigation program to challenge “excessive claims” in the world’s oceans and airspace. China, which requires foreign vessels sailing in these waters to seek Beijing’s clearance, issues warnings over the incident.

Just over a week later on Nov. 8, two U.S. B-52 bombers flew from their airbase in Guam to within 15 nautical miles of artificial features built by China in the South China Sea, prompting Beijing to issued two warning to the U.S. aircraft. China’s Foreign Ministry condemned the acts, saying it was “illegal and provocative.”

While the South China Sea dispute previously centered on China’s relations with two claimants, the Philippines and Vietnam, other regional states like Indonesia and Malaysia now publicly questioned Beijing’s intention over land reclamation on the Spratly Islands as this entrenched Chinese presence near to their borders.

Indonesia’s security chief Luhut Panjaitan indicated that the country might take China to an international court if dialogue over the Natuna islands dispute failed. The matter surfaced after Jakarta noted that Beijing had included parts of the islands within the “nine-dash line”, Reuters reported Nov. 12, as Indonesian Foreign Ministry spokesman Armanatha Nasir stressed "we do not recognize the nine-dash line because it is not in line with ... international law."

Indonesia’s Foreign Ministry has not receive a response from China, but Chinese Foreign Ministry spokesman Hong Lei said Beijing did not dispute Indonesia's sovereignty over the Natuna Islands although there exists "some maritime disputes", which he did not elaborate.