It’s been an ongoing challenge – attracting, retaining and advancing women in STEM careers. And a panel of experts tackled the issue again at the Women’s Global Leadership Conference in Energy Wednesday. 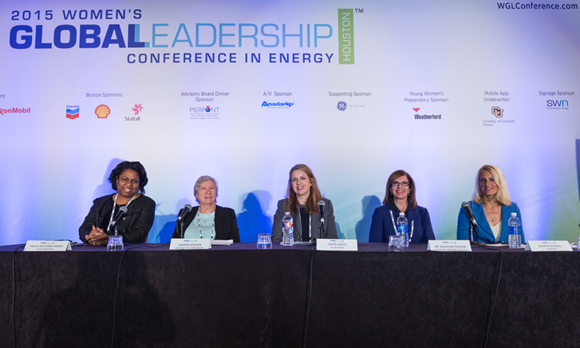 Harris, who also serves on the board for the Houston Independent School District, said the biggest challenge in attracting more women and minorities to STEM is three-fold: expectations, education and exposure.

For example, computer science should be considered part of math or science curriculum, rather than extra credit, she said. Kids aren’t taking computer science because they don’t get credit for it or teachers are paid more to teach something like keyboarding.

Also, educators and parents should raise their expectations for students by encouraging girls to take AP courses rather than just regular courses.

In regards to exposure, Harris identified herself with many kids, growing up in an environment that didn’t provide the exposure to STEM opportunities.

“It’s not that [the kids] aren’t smart, capable or intellectual,” she said. “They haven’t been exposed. They don’t have the dad who’s in the industry or the mom working as a professor. They just don’t know.”

Harris said the industry and educators have to make sure that girls know the advantages of using a STEM degree to get what they want out of their career.

“I always tell my daughter, who is a great math student, ‘you can be a butcher, a baker or a candlestick maker, but you have to do it with an engineering degree.’”

A lack of financial opportunities is another challenge, Gascon noted, adding that Houston Community College System is addressing that by offering the Texas-Science, Technology, Engineering and Mathematics (T-STEM) grant to students pursuing STEM degrees. HCC has been awarded 200 scholarships totaling $525,000 for the 2015-2016 academic year.

Blackwell said a big challenge is girls not seeing individuals who look like them as role models.

During outreach, Blackwell said it’s important to make sure to take some younger employees who may be a little closer in age to a middle-school students so that the students can better identify.

“STEM is hard. By providing role models and mentors who can go out and speak to a lot of girls and say ‘it didn’t work for me the first time’ or ‘I got a C in that class’ can help,” Blackwell said. “We’re all perfectionists. We want to do it right the very first time and often times get discouraged if we don’t. Giving those examples to girls very early shows them resilience and they can have that support once they get to the high school level.”

Another challenge is often times, women are scared to place their career as a priority.

“As a university educator, I find it really disheartening when women get a bachelor’s, a master’s or sometimes a doctoral degree and then they don’t end up working in STEM,” said Mosher. “One reason for that is they end up being a spouse and never say ‘my career is important.’ Also they don’t think that they can have children and an active career at the same time. That’s one thing I really stress to students. I have two children and it didn’t stop me. It’s okay to say ‘my career is important.’”

“Not All About Pink, Purple and Sparkles…”

Blackwell said at Chevron, her focus is on K-12 education and working with partners in the business and university partnerships as well as Chevron’s global diversity group to retain the women who work at the company.

“It’s not all about putting pink, purple and sparkles on everything. It’s about how do we create programs that really draw women in and help make them part of the process,” she said. “We can’t find one out-of-the-box solution. Every girl is different. Every community is different and we have to design programs with that in mind, first and foremost. We have to create an environment for women to thrive.”

Harris added it’s not about going overboard or isolating one gender, but creating a space that is comfortable for everyone.

Goetz, who grew up on a farm in Scotland, entered the energy industry with an admitted “negative perception.” She told herself she’d only work in the industry for two years, then change fields. That was 23 years ago.

“I stayed in the industry because every single day I get challenged. I get the ability to solve problems and that gives me a tremendous amount of satisfaction,” said Goetz. “Real life is not pink and purple. I’m not going to paint my next blowout preventer purple. It’s about making people comfortable and finding out what’s appropriate for each age group.”

For example, Goetz said GE received a lot of feedback from middle school girls who said they preferred hands-on work rather than somebody coming in and telling them about how great STEM is.

“GE allowed me the opportunity to become a role model and give back,” she said. “Today is a tremendous opportunity for people like us to show who we are, what we’re doing and how we have viable and satisfying careers in companies like GE where we can give back to the community and encourage girls to have those same experiences.”