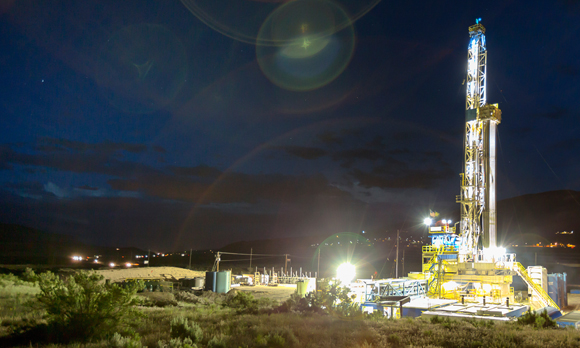 "I think with the onset of the 'anti' movement these decisions have become much higher up in terms of public interest and that's the reason you're seeing decisions having to go to planning committee and therefore taking a much longer period of time."

Meanwhile, although the UK's central, Conservative-dominated, government has expressed a great deal of interest in encouraging the development of a shale gas industry and wants to win hearts and minds among the public in support, the government departments it controls are proving to be somewhat of a liability.

At the start of this month the details of a Department of Environment, Food and Rural Affairs (Defra) internal report into fracking were made fully public at the request of the Information Commissioner's Office. The report – first released under UK freedom of information laws last year with several of its sections blanked out – has proved somewhat embarrassing to the government.

No Data to Suggest Fracking Will Hit House Prices

This is because, among other concerns it highlights about fracking, the report – “Shale Gas: Rural Economy Impacts” – suggests that house prices in close proximity to shale gas exploration sites could fall by up to 7 percent. In the property-obsessed UK, such a revelation is like gold dust to the anti-fracking movement.

The study also suggests that properties located up to 5 miles from a fracking operation could face greater insurance costs to cover potential losses from an explosion on the site, and that the cost of renting homes near fracking sites could be pushed up by people coming to work on them.

Much was made of the Defra report in the UK media in the following days, but Cronin told Rigzone that the context under which the report was written needs to be understood. The report, he said, was an internal document written by a junior member of Defra's staff for a more senior member of staff.

"It wasn't an official report by government. It was a piece of research that was done by a junior member of staff. In my opinion it should never have even got to the stage where it was redacted because it was clearly a very internal piece of research," he said.

"It picks up a number of issues on the negative side. So, house prices? Well, I think there are two things to say there. First of all, all of the research both evidential and anecdotal in this country is that there are no issues with house prices next to oil and gas sites."

A report produced earlier this year by Jones Lang LaSalle, for instance, found that property prices near Cuadrilla sites in Lancashire have outperformed those of other parts of northwest England over the period that work has been conducted at these sites.

"And we've seen data from Singleton and Witch Farm down in the south [of England] that shows house prices there exceed the average," Cronin added, referring to two of the UK's already-existing producing onshore oilfields.

"If you look at the Lancashire example, they got the noise down below the UK regulations and below the worldwide health authorities' absolute minimum. So, again all of these things can be managed and all of them in the Cuadrilla example were sufficient to pass muster with the planning officer. But I do accept that during the construction period there will be truck movements, just like creating a Tesco [supermarket] or a wind farm or a solar farm or any construction activity."

But, while pointing out that the Defra report is a red herring, Cronin is keen to state his commitment as head of UKOOG to defending the UK's burgeoning shale gas industry against criticism such as this.

"A large proportion of the media has written it in such a way that it was an official report and it wasn't. It was a piece of research done by a junior member of staff … It causes debate and I'm very happy to just give the facts," he said.