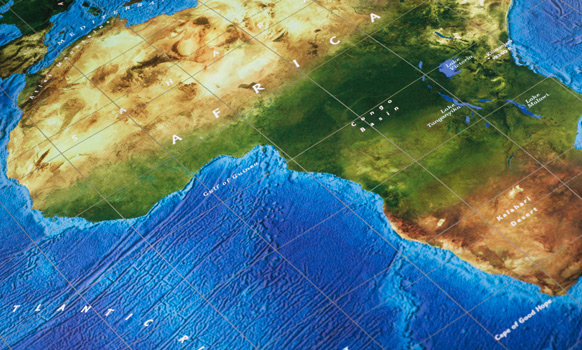 The right technology and tolerance for risk could make West Africa the next "North Sea," possibly offsetting the balance of the world's production hub.

During the early 1970s, Saudi Arabia cut production as a reminder that it held the cards to the world’s petroleum resources. What the swing country did not count on was the slew of development and production that would subsequently take place in the North Sea. As a result, a new oil supply was born far away from the Middle East.

Fast forward to today: With oil saturating the market again, Saudi Arabia has kept its spigots on this time to try and prove once again its place on top of the hydrocarbon pyramid. Despite its effort to slow production – primarily from shale in the United States – there is still room for surprise in the oil marketplace.

The small offshore oilfields of West Africa, if exploited properly, could become the next big economical play even as oil prices hover around $60 a barrel, said Keith Millheim, a director at Atlantis Offshore, an offshore technology company focused on well testing, production and drilling, to Rigzone. And, all it takes is one adventurous company to get the ball rolling.

Innovation in the North Sea

Entrepreneurs such as the U.S.-owned Hamilton Brothers learned how to make small fields in the North Sea economical in the mid-1970s, specifically the Argyle Field off the coast of Scotland that brought Great Britain its first oil. The company’s game-changing technology was the first Floating Production Storage and Offloading (FPSO) vessel deployed for oil production. It changed the offshore industry forever.

“If you have the money and you can find the technology to make it work, things begin to snowball and other companies come in, just as Hamilton Brothers essentially launched the industry in the North Sea. Entrepreneurs created the small companies that grew the North Sea,” said Millheim, who will be speaking at the 2015 Africa – Small & Marginal Oil Fields Development Conference in London this August.

Small and midsized companies came into the North Sea with a new set of tools, such as FPSOs, to make small fields commercially viable. Their key ingredients were their willingness to take risks, innovative technology and investors willing to back their ideas, Millheim said.

Countries including Norway and the United Kingdom opened their doors to major operators and required them to invest in the countries’ internal research entities and to train their people – thus creating a path to a self-sustaining industry.

West Africa, particularly its small offshore oilfields, could be the next “North Sea scenario” if played correctly, Millheim said.

“From the typical types of reservoirs encountered offshore to their size and how prolific they are, it’s really a dream,” he said. “There is possibly more oil in the small fields in West Africa than in the reserves in the big fields. How do we change our thinking to make them work?”

“If you can do it economically, it’s a company maker,” he said.

Unlike the North Sea, which comes with environmental challenges of rough weather and sea ice, the coast of West Africa is a more ideal place to work – more ideal than the Gulf of Mexico, which battles hurricanes and other destructive currents, Millheim said.

Furthermore, the continent is welcoming of international investors, as the majority of its countries have done little to invest in the technology needed to extract their own hydrocarbons.

Over the years, major oil companies have exploited the large oilfields of West Africa as they saw fit. The host countries never required that investments be made in internal technology centers or in research and development activities, Millheim said.

Ken  |  July 12, 2015
I have already spent six years in West Africa. Huge potential for Oil & Gas Exploration and Development.. Biggest single problem is corruption. When the money starts coming in, problems arise on the distribution of wealth. But, sticking to the main topic, I do feel there is much to gain in future oilfield development in West Africa. Been there! Seen it!
Khalid  |  July 10, 2015
Like anywhere else, there is potential in Africa. But I think the title of the article is too dramatic for no reason Beware OPEC! The article talks about small companies making a buck here and there from marginal fields that the majors passed on. Africa will have to find elephant fields before OPEC has anything to worry about!
Enoch Oblitey  |  July 10, 2015
It is hypocritical for the Western world to feed us at this time about West Africa, and its ability to outshine Saudi Arabia. The small country of GHANA has employed so many Western Oil Well experts for many years before now, and they have always come up EMPTY. Was it a conspiracy on the part of the Western Oil Well experts, one is bound to come to the conclusion that it is SO. I do not even believe they did what they were supposed to do. They only took the money and left. Now that the price of oil has been lowered by the Western World, oh they say there might be lots of oil in there after all. We are all watching the next steps. I am only an outside observer, but Long Live Africa!
Choma  |  July 10, 2015
This is possible because Nothing is Impossible!! But then I can relate with what Mike is talking about. However, it does not end there. I am sure some National Oil Companies will rise up above corruption and make full utilisation of an effective local content law like we have in Norway and Brasil and not just being a cost centre. Nigeria for instance after the review of the Petroleum Bill will see a new industry. However, I am a bit skeptical about our ability to take the large scale gamble that the multinationals take in the area of prospecting where a large sums of monies are spent and nothing may not come out as expected and they do not close shop but rather continue to prospect due to their financial capabilities. If West Africa tells herself the truth, learn from her past mistakes and do the right thing henceforth, this is very very possible.
Alozie  |  July 10, 2015
Im with Mike on this one. There’s enormous potential in West Africa and its a shame that the leaders are not enacting and enforcing policies to make the region thrive. True indigenous companies are taking steps to take advantage of the opportunities available but without long-term policies and a vision for sustained development at the moment. We have the resources, human and material but the environment is the limiting factor at the moment. Hopefully the present govt in west african countries, particularly Nigeria, will change this dynamic...an Egg in cold water will not turn into a hardboiled egg, just like carbon without extreme pressure will not turn into a diamond. Success was achieved in the North Sea and US due to the conducive environment for business and that is what West Africa is lacking in my opinion.
Sandra Akadidi  |  July 09, 2015
Nigeria really need to take advantage of this. Small companies can do the job and become bigger than the so called big companies now. Patience is all they need to have.
Dela  |  July 08, 2015
Its sceptics like you, Mike, whose faces I cant wait to see when it all happens. The companies who understand have already set up in West Africa. It wont be anither decade.
Godwin  |  July 08, 2015
Tend to disagree with Mike slightly. Its a sure possibility, the corruption challenges notwithstanding. I know that the awareness of this issue is driving most of the countries government to reverse the trend and attract investors. Its possible.
Emmanuel Okoroafor  |  July 08, 2015
West Africa will thrive. Serious companies (not Cash & Carry) will always find their ways around potential obstacles to conduct ethical and profitable business at the same time as they are helping develop the communities they operate in.
Julius  |  July 08, 2015
As it stands, Royal Dutch Shell and some of the IOCs divested alot of their onshore investments in Nigeria in the past 10 years and local small producers are investing heavily in them. Nevertheless, we still lack funds and interest in R&D to really push for out of the box innovative procedures for the recovery of small marginal deepwater reserves. Local Capacity development is on-going with the advent of Local Content bill but no way near where it should be, local workers are still not well trained and school curriculums are obsolete and out of touch with current industry tactics/technology. Honestly, I dont see this happening in the nearest future if the current status quo remains.
Mike  |  July 07, 2015
Never going to happen unless the west African countries become less corrupt and reverse their visa policies. Its quickly becoming impossible to do business there. As the trend stands, in a few years companies wont be able to get in to explore and produce anything.