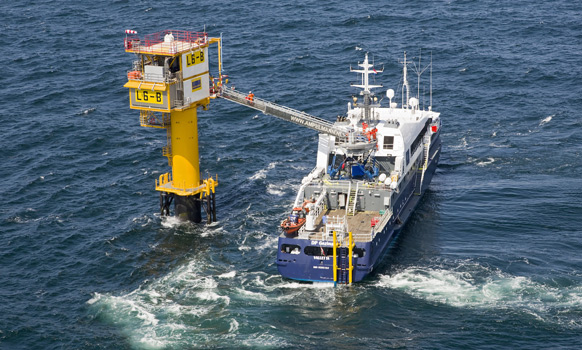 Wintershall said that the new generation of 'Minimum Facility' platforms, such as the L6-B, can economically produce even from very small natural gas fields. Source: Wintershall

The platform was built in just nine months and was brought to its offshore location in June 2014. Wintershall said that the advantage of the new generation of "Minimum Facility" platforms is that they can be deployed in particularly shallow waters and can economically produce even from very small natural gas fields. Another benefit is that the can help the firm cut down on costs thanks to the short time needed for construction and their simple installation.

The L6-B field is located in a restricted military zone, with Wintershall Noordzee being the first company allowed to operate in the area. Consequently, the installation needs to be as small as possible and Wintershall believes its topside may be the smallest in the world.

The facility is anchored to the seabed through suction piles. It rises about 60 feet above the sea and has three decks but no helideck. The facility can accommodate a maximum of two producing wells. The substructure weighs just 1,100 tons, with the topside weighing only 100 tons. A pipeline will transport gas produced by L6-B to the neighboring platform of L8-P4.

Wintershall sees the North Sea as a core region for it. The firm now operates 25 offshore platforms in Dutch, German and UK waters, and it expects natural gas production to be one of its main areas of activity in the Netherlands and in the southern North Sea.

In April, Wintershall said it would step up activities in the North Sea after having spent the past five years winning exploration and production rights over approximately 120 licenses in the region. At the time, Wintershall Noordzee Managing Director Robert Frimpong said that the firm believed it could make a contribution "to securing Europe's energy supply be efficiently developing the assets we have close to home".