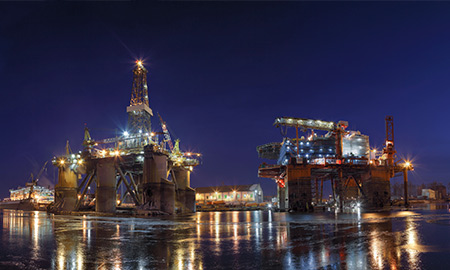 There is little doubt that the idle and retired rig counts will increase dramatically during the remainder of 2015. Some of it will be due simply to existing contracts coming to an end and/or options not being exercised, but early rig releases will also be responsible for adding to the numbers. Although a total is impossible to say at this point, channel checks suggest that number is currently over 20. For instance, in Southeast Asia alone, there are seven rigs reported to be candidates for early release. Couple that with eight rigs that are due to come off contract by the end of March and newbuilds coming out shortly that currently do not have contracts and it becomes easy to see how fast the idle numbers will add up. Given these kinds of numbers, the question then becomes how many of these rigs will be maintained with crews and how many might be cold-stacked? One factor that may help determine that is the age of the rig fleet. This has been written and talked about on many occasions and many in the industry have called for owners to get rid of old equipment for many years. According to RigLogix, as of Feb. 5, 395 of the 861 (45.8 percent) jackups, semisubs and drillships (excluding under construction units) in the world are 30 years of age or more. Thirty to 35 years, while not an absolute, is generally considered the useful life of an offshore rig. Within the 395 rigs, 271 (68.6 percent) were either working or had upcoming work scheduled. On a side note, the Hercules 120 jackup is the oldest rig in this group at just over 57 years of age. While it is currently working, it will be cold-stacked when it wraps up its current contract in the Gulf of Mexico around March 1. It should be noted that many of these rigs have had substantial steel replacement and/or equipment upgrades over the years so age alone does not necessarily reflect the rig’s current condition, and as evidenced by the numbers, some of these rigs will continue to work well past 30 or even 40 years in some cases. Nevertheless, many of the rigs that ultimately are either cold-stacked or retired will likely come from this group of rigs. Some owners will opt to warm stack certain rigs, keeping a skeleton crew onboard and keeping the rig running, which significantly reduces operating costs and allows the rig to come back into service faster if and when the market improves. Table 1 numerically displays the 395 rigs that are over 30 years old by rig type and region. 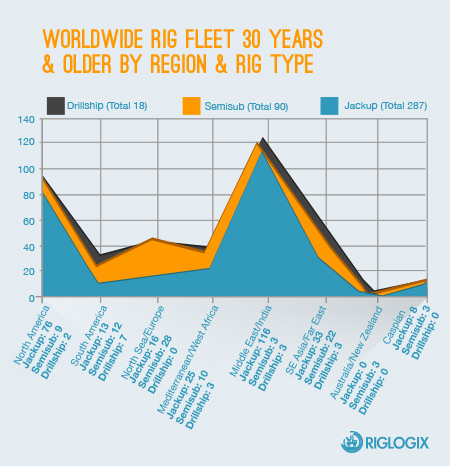 Of course, when discussing rig fleet age, the question of contractor fleet ages always comes up. According to RigLogix, rig owners with 20 or more rigs in their fleet (excluding under construction rigs) and an average fleet age of 30 years or more include:

On the other end of the spectrum, Seadrill (42 rigs) has the youngest fleet in the world with an average age of just 4.1 years. It is followed by Maersk Drilling (23 rigs) at 10.3 years and Noble Corp. (31 rigs) at 12 years. Table 2 shows the average fleet age for rig owners with 20 total rigs or more. 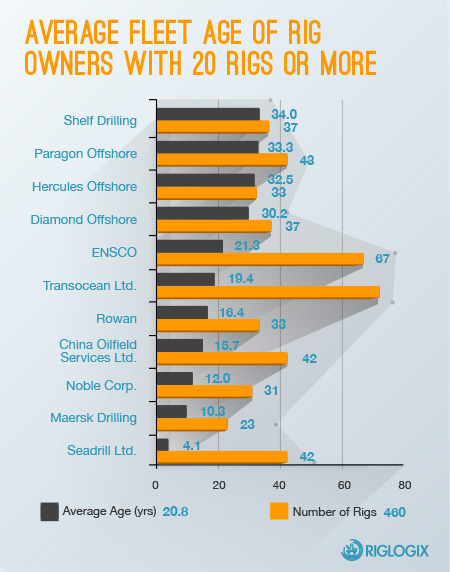 Average Fleet Age of Rig Owners With 20 Rigs or More

One final group of rigs to look at is the existing cold-stacked fleet. As of Feb. 5, RigLogix shows there were 60 cold-stacked jackups, semisubs and drillships worldwide (including the Hercules 120 that is scheduled for cold stacking). Fifty-two (86.7 percent) of those are 30 years or older, and 32 of the 60 (53.3 percent) have been idle for three years or longer. Cold stacked and over 30 years of age is not a good combination if a rig is hoping to stay around, although some will manage to pull it off. In general, however, these are likely two factors that could most determine a rig’s fate. While not in every case, this group of rigs could very well be viewed as the most likely candidates for retirement.

Finally, there are 87 new rigs (jackups, semis and drillships) scheduled to enter the fleet during the remainder of 2015. Some deliveries will be delayed, but most are expected to be delivered more or less on time adding greatly to the rig supply. However, 2015 is also shaping up as a year of rig attrition which could partially negate the net gain to supply. Historically, rig owners have been reluctant to retire rigs because in a good market they are cash cows, meaning they are still able to bring in good dayrates with lower operating costs. Some of these older rigs will most certainly cold stack, and if the previously-mentioned recent rig retirements by Transocean, Diamond, Noble and Atwood are any indication, the fleet could also see a large number of rigs leave this year. Should the current pace of retirement continues, rig attrition in 2015 could reach or eclipse the 30 rigs removed from service in 2014. 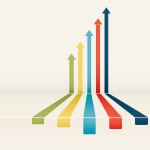 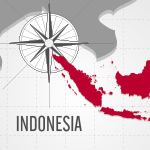 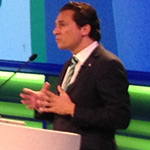