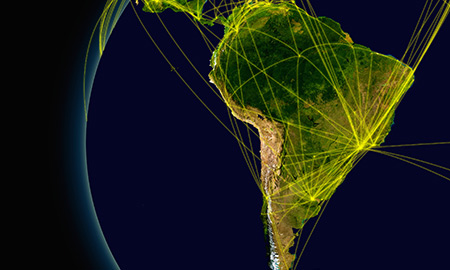 Latin America's oil producers have become caught in the crossfire between OPEC and the North American shale drillers.

The number of onshore rigs drilling for oil and gas in the region fell to just 272 in January, from 339 in July 2014, according to data published on Friday by oilfield services company Baker Hughes.

In both absolute and percentage terms the slowdown in onshore drilling is worse than in any other area outside the United States (http://link.reuters.com/pyp93w).

The number of active land rigs has fallen sharply in OPEC members Ecuador (down by 46 percent) and Venezuela (21 percent) as well as non-OPEC Bolivia (60 percent), Colombia (18 percent) and Mexico (45 percent).

The only country where there is no evidence of a slowdown in activity, so far, is Argentina, where the number of rigs operating has climbed steeply over the last three years and has remained stable in recent months.

The Vaca Muerta shale in Argentina's Neuquen Basin is seen as one of the most promising shale plays outside the United States and has attracted strong interest from international oil companies.