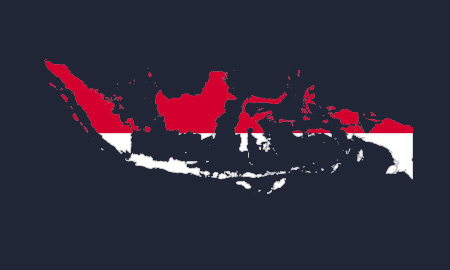 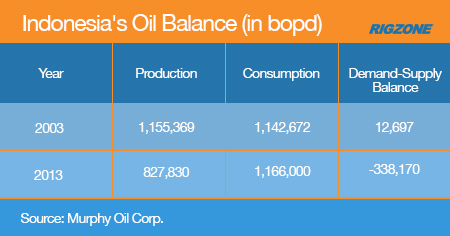 Given the challenges facing the hydrocarbon industry, Widodo appointed Sudirman Said – a former corporate secretary at Indonesia’s state-owned oil and gas firm PT Pertamina and an anti-corruption activist – to head the graft-ridden Energy Ministry, with the minister also responsible for the state’s mineral resources sector. 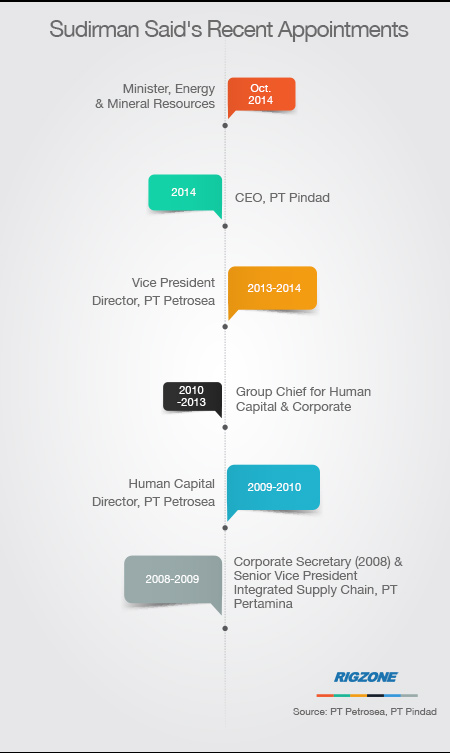 Said has moved to repair the tarnished image of the energy ministry, where his predecessor Jero Wacik stood down from office in September after being named a suspect in a case involving extortion and kickbacks worth about $841,000. The new minister recently dismissed the director general of oil and gas after the unit was rated poorly by presidential advisors and now required all top directors to re-apply for their jobs.

"Building a reputation and public trust is our homework … we want to refresh our organization...we want to put in place better people," Said explained, as quoted by Reuters.

"SKK Migas needs to be managed by a fighter, and in my opinion Sunaryadi can be categorized as a fighter. His strength, as someone very concerned with the institutional system, is much needed at SKK Migas," the energy minister said, as quoted in a Nov. 19 Reuters report.

Besides focusing its attention on SKK Migas, which has temporarily assumed the role of former upstream regulator BP Migas after the latter was declared unconstitutional by a court ruling in late 2012, the government revealed plans to introduce a new oil and gas law that would further strengthen the regulatory structure for the industry. SKK Migas will continue to handle the country’s upstream production activities with oil and gas firms pending the introduction of this law.

In a related development, president Widodo has ordered his cabinet to simplify bureaucracy and de-bottleneck problem areas.

"We are facing a daunting task to bring back confidence, bring back credibility and bring back people who want to do business in Indonesia,” Widhyawan Prawiraatmadja, a special assistant to the new energy minister said in a Nov. 12 Reuters report.

The government is currently compiling a list of areas the industry wants fixed, including a tax on land use being applied to oil and gas exploration, according to Coordinating Maritime Minister Indroyono Soesilo, who also oversees the energy ministry.

Moves by the government to improve regulatory efficiency have not gone unnoticed, including the president’s recognition of the need for appropriate fiscal terms for different geological specifications in Indonesia’s oil and gas reserves.

"When you look for that equitable value for both the country and the investor, that is a key mechanism to be able to achieve that and help things to get developed," Exxon Mobil Corp.’s Indonesia's chief executive Jon Gibbs told Reuters.

ExxonMobil and its partners – Pertamina, France’s Total S.A. and Thailand’s PTT Exploration and Production plc (PTTEP) – in Indonesia’s offshore East Natuna gas field, formerly known as Natuna D-Alpha Block, have yet to receive any news on the production sharing contract for the acreage.

Approvals for several upstream projects in Indonesia have been put on hold during the election year and the Widodo government is aware that the energy industry is watching with anticipation its move on these developments.

“These need immediate decisions,” according to Pri Agung Rakhmanto, as quoted in Reuters, citing the delays on the Indonesian Deepwater Development (IDD) and Masela Abadi projects operated by Chevron and Japan’s Inpex Corp., respectively. Rakhmanto was part of a team that advised the new president on energy matters prior to his inauguration.

While Chevron is proceeding with the first phase of the IDD natural gas project, comprising the Bangka field development, the U.S. major has indicated a delay in the timeline for Gendalo-Gehem development under the second phase.

partners to secure the necessary approvals and contractual and commercial agreements for the second stage of IDD, the Gendalo-Gehem development,” a Chevron spokesman said in an email statement to Rigzone.

On the Abadi project, Inpex has requested the government to extend the contract for the Masela block beyond 2028 as it needs more time to recoup its investment. The operator is completing front-end engineering design work for the liquefied natural gas (LNG) development, which commenced in January 2013.  Abadi LNG project comprises a 2.5 million tons per annum floating LNG facility.

Meanwhile, Total and partner Inpex will not increase its investment in East Kalimantan’s offshore Mahakam block next year as the government has yet to decide on an extension of the contract for the block which expires in 2017. The Mahakam joint venture’s request is being contested by Pertamina, which has repeatedly expressed to the government it is ready to take over the expiring production block.

"Next year we will invest … around $2.5 billion [in Mahakam block], in cooperation with partner Inpex," Total Indonesie communications chief Arividya Noviyanto told Reuters, compared to $7.3 billion if the contract is renewed.

"There must be a final decision on the contract," Noviyanto warned as output from the field could decline by up to 72 percent if investment in development and maintenance are not made soon. 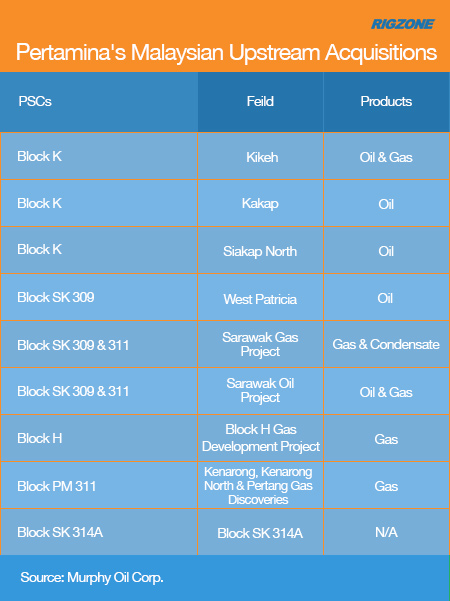 When the transaction is completed, Pertamina will have 30 percent of Murphy’s Malaysia net production, which stood at around 86,000 barrels of oil equivalent per day (boepd) in 2013, data published on U.S. independent oil company’s website indicated.

Looking ahead, market attention is focused on how the Widodo government moves the petroleum industry forward given the stagnation in the last few years. While it appears that the new president has signalled his intention to take measures to attract upstream investments, much will depend on whether words can be translated into deeds.

"A lot of things being said are very positive and I look forward to seeing those materialize," ExxonMobil Indonesia’s Gibbs was quoted by Reuters as saying, a mood that reflects the current expectations of the industry.