The Prosperidade and Golfinho-Atum fields have independently certified reserves capable of supporting a development of 10 million tons per annum (Mtpa) each, according to Steve Hoyle, Anadarko’s vice president of LNG Marketing & Shipping, who spoke at the 6th World LNG Series – Asia Pacific Summit in Singapore in late September.

Meanwhile, advanced preparations have begun for early works at a 30 square mile site in the Afungi Peninsula in Cabo Delgado province in northern Mozambique, where the onshore liquefaction facilities for the Anadarko-operated Mozambique LNG project will be located. The government has also given its approval to Area 1 project’s environmental impact assessment report. 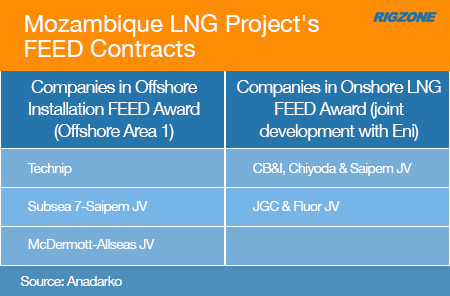 Work on Area 1 project’s onshore and offshore front end engineering design (FEED) contracts, awarded by Anadarko in December 2012, have been completed. The firm is progressing to the final selection process for the engineering, procurement and construction (EPC) contractor and has already submitted a draft plan of development to the Mozambique authorities, Hoyle said.

The focus of the Area 1’s offshore FEEDs is on subsea production systems for the Prosperidade complex, with the FEEDs each culminating in the delivery of a full engineering, procurement, installation and commissioning plan for the development.