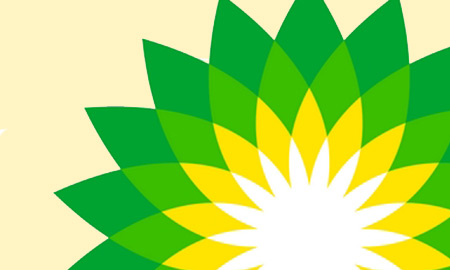 BP plc's latest Upstream Learning Center (ULC), located at the oil major's UK headquarters at Sunbury-upon-Thames, just outside of London, aims to give the company more flexibility in how it trains its workforce around the world.

Slightly smaller than BP's Houston ULC, the Sunbury facility will help the firm to train its European-based staff as well as employees from further afield both on site and via remote learning.

After its completion this summer, BP invited Rigzone to take a look at the center – an offer we jumped at. 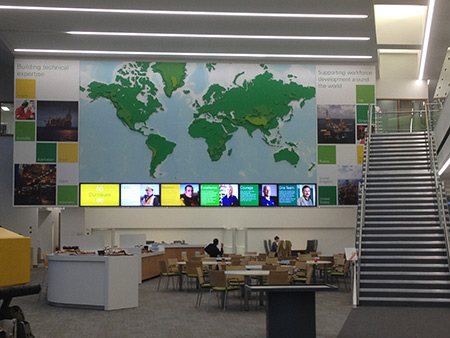 The main foyer of the Sunbury ULC consists of a large space in which BP employees attending the facility can meet informally, as well as use various devices to help them learn about BP's business.

There is an interactive table that provides information and data about BP's operations around the world. Visitors can also collect an iPad from the facility's reception that they can use to point to items distributed around the foyer and – thanks to an augmented reality app – learn in detail about those items. For example, using the iPad, Rigzone learned about the different kinds of rock that BP wells encounter around the world. 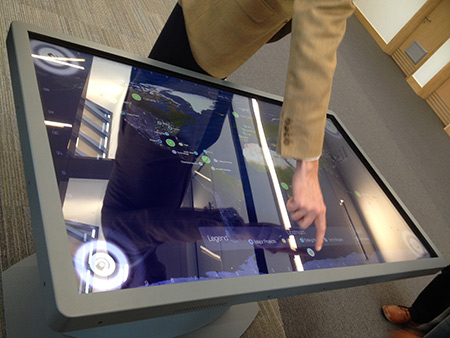 The interactive table is used to help visitors learn about BP's business and operations around the world. Image by Jon Mainwaring

Chuck Russell, head of Infrastructure and Performance for BP Upstream Talent & Learning, was responsible for establishing the Sunbury ULC.

Showing Rigzone around the facility, Russell seemed particularly keen on the informal networking and learning opportunities that the Sunbury ULC can offer.

"Prior to this, [learning] took place in hotel rooms and conference centers in southeast UK. So, by bringing people into this center, there's a lot of cross-pollenization and the sharing of stories that wouldn't otherwise happen. So we have HR in there along with Procurement & Supply Chain Management, Projects, Wells, etc. during the breaks before class starts and afterwards." 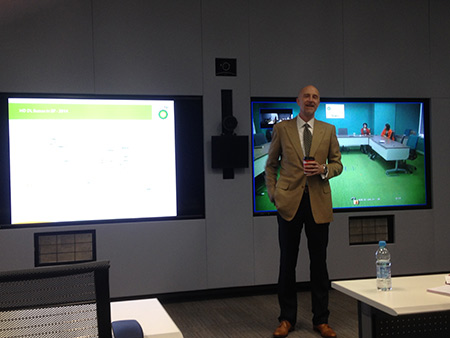 The ULC is used to host on-site courses that typically last from three to 10 days, Russell explained.

"But we have a lot of half-day and one-day courses where we can use distance learning to deliver that content very cost-effectively," he said.

For this reason, BP's Distance Learning Classroom not only includes large video screens and several cameras but "green screen" technology so that lecturers can flash up important data for their students behind them while on camera.

A centerpiece of BP's new ULC is its Well Control Simulator. Every two years, well control professionals need to be certified either through the IADC (International Association of Drilling Contractors] or the IWCF (International Well Control Forum). BP, like Royal Dutch Shell plc, has decided to bring that training and certification in house.

"The industry standard is kind of the least-common denominator for land rigs, shallow water rigs and deep water rigs, and [because] much of what we do is in deep water we wanted to raise industry expectations, and raise our own expectations, around that certification process," Russell explained.

"This is the Applied Deep Water Well Control Course. This is one where we bring our partners in as well … Those are high risk, high profile wells and we bring all of our teams in to face six of the most harrowing scenarios they may ever face in their careers."

BP's people running the simulator can "unleash Armageddon at any time", so problems that drillers using the simulator might face can include multiple down-hole problems linked to surface issues such as equipment failures. The drill can get stuck, with drill bits blunted, and nozzles can be lost.

This is part of what Judith Luberski, HR vice president for BP's Production Division, describes as BP's "learning-by-doing" approach that relies on the "70-20-10" philosophy.

"The theory is that 70 percent of how people learn is on the job: what they do every day, the types of experiences they get, the structure of the roles they are hired to do. Twenty percent is more around networking/social learning and 10 percent we classify as formal learning," she said.

"The well simulator… is where we try to blend that experience of what people would do on the job with being in a formal classroom.

"Simulation allows you … to practise and get into something much more quickly. And I think that will help us, to some extent, accelerate capability development and pull capability through faster than perhaps we've done historically."

Another key component of making sure that useful learning takes place is to have teachers at the ULC who really do know what they are talking about.

"We work to leverage our own capabilities. So, many of the faculty members who lead and teach programs are BP employees. And we think there is a real value in that in terms of knowledge transfer and knowledge sharing. It equips some of our leaders to perhaps do things they wouldn't normally do in an oil and gas company." 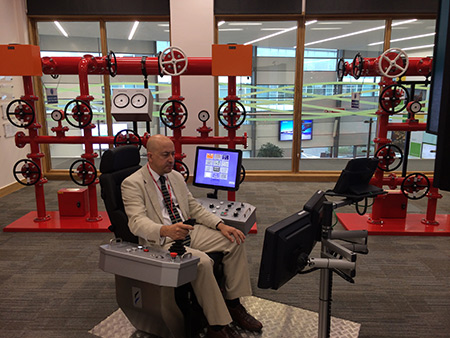 Karen Voelker  |  October 27, 2014
I had the opportunity to tour this facility several months ago- amazing! The hands-on learning method is a perfect way to experience/learn. The technology available in the classrooms would be the envy of instructor. Well planned an designed, amazingly implemented.
nurlan gunashov  |  October 26, 2014
Excellent
RELATED COMPANIES
Company: BP plc more info