Musings: Further Proof Of Industry Change Due To Era of Austerity 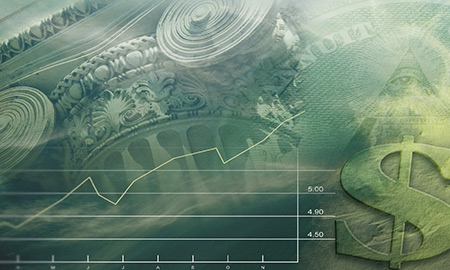 In an Era of Austerity, changes reflect management views of the challenges in dealing with the capital cost/commodity price/investor return trifecta, as they assess business opportunities.

Increasingly, energy news is full of articles highlighting steps companies are taking as they reassess how to more efficiently and effectively operate in the new Era of Austerity. The changes reflect management views of the challenges in dealing with the capital cost/commodity price/investor return trifecta, as they assess their current and future potential business opportunities. The magnitude of attention paid to these steps is quite different depending on investor and media assessment of how “out of the box” the changes undertaken are. For example, a couple of weeks ago the business world was buzzing about the pipeline and infrastructure empire restructuring announcement by Kinder Morgan (KMI-NYSE). On the other hand, little media attention was paid to Royal Dutch Shell’s (RDS.A-NYSE) decision to sell its producing acreage in Wyoming and Louisiana in exchange for cash and acreage in Pennsylvania at the same time. Not much media attention has been paid to A.P. Moeller- Maersk’s (Maersk.B-CO) decision to cut by a quarter its U.S. E&P staff by laying off 54 employees, and shifting exploration focus back to Copenhagen, Denmark, the home of the corporation. In Canada, the past month has contained many oil sands players announcing cutbacks in spending and delays in their decisions to develop new projects due to escalating costs and other internal issues at the companies.

A topic of growing interest for the industry is speculation about the future trend in global oil prices. There are numerous analysts suggesting that the only reason oil prices are where they are - $102 for Brent and $93 for West Texas Intermediate – is the geopolitical turmoil that has oil traders uneasy about the potential for further global supply disruptions, coupled with the substantial volume of crude oil already off the market due to violence. This school of thought suggests that the global economy is weakening as demonstrated by the negative GDP growth for numerous countries in Europe, the slowing of growth in China and the sluggish U.S. economy. This means that oil demand may be falling such that any additional supply returning to the market will force oil prices down. Their only question is how far down prices may go and what will the energy companies do. 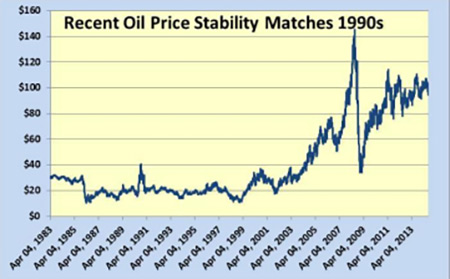 On the other hand, some analysts suggest that the escalating cost of finding and developing new oil and gas resources will force commodity prices higher as that will be the only way the industry can be incentivized to bring new supplies into production to offset depletion of existing wells. These analysts see the current slow demand growth trend as providing the industry time to prepare for that next surge in global oil prices.

What is confounding analysts is the degree of oil price stability that has existed for the past few years. That trend is shown clearly in Exhibit 1, and is evident especially since the start of 2011. We thought it would be interesting to examine this price stability phenomenon for a longer time period, shown in Exhibit 2 on the next page. That chart shows oil prices since spring of 1983 to now. It appears that the more recent years have been more volatile, but as we saw in Exhibit 1, that is not true for the past nearly four years. What is most interesting is the oil price stability that existed during the late 1980s and 1990s. What went on during that period may be what we are starting to see now – restructuring of the oil and gas industry and its service and infrastructure sectors.

After the oil price collapse in 1985, engineered by Saudi Arabia, the oil price was amazingly stable at around $20 a barrel from 1987 through 1997, with the exception of the price spike associated with the First Gulf War in 1991. The economic damage done to the energy business as a result of the 1985 fall in oil prices was tremendous.