Half of hiring managers in the energy industry plan to hire more oil and gas professionals in the next six months as compared to the first half of the year, according to a semi-annual hiring survey from Rigzone, the leading online resource for oil and gas information, data and talent recruitment. That’s a slight tick down from the start of 2014 when 53 percent of hiring managers said they planned to increase hiring.

While more hiring is on the horizon, the recruitment environment is becoming increasingly challenging for oil and gas companies. Nearly four in 10 (39%) hiring managers said the time to hire has lengthened, primarily due to the inability to find qualified professionals to fill open positions. That’s up from 32 percent who noted longer fill times at the beginning of 2014.

Four in 10 (42%) employers said an improving economic or market environment is leading to the hiring increase. And, candidates are ready to take advantage: more than six in 10 hiring managers said candidates are asking for more money than six months ago and nearly half (48%) of companies said jobs are going unfilled due to an inability to match the compensation requirements for the position with candidates’ expectations.

“Oil and gas professionals today recognize the energy job market is theirs for the taking,” said Paul Caplan, President of Rigzone. “It’s up to companies to offer the right position for the right compensation package or risk losing candidates to firms and industries competing for the same in-demand talent.”

When companies find the right talent for open positions, they act quickly. After a position is budgeted, it takes less than a month to extend an offer to an oil and gas professional, said a third of hiring managers. The issue is more than a quarter (27%) of companies said an increasing number of candidates are rejecting offers, as compared to six months ago.

Adding to the positive news for energy professionals and their colleagues, just 11 percent of companies said layoffs are likely in the next six months. 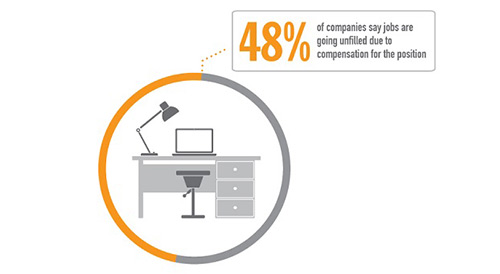 Nearly half (49%) of hiring managers anticipate more full-time hiring this year as compared to 2013. More than a third (34%) expect a rise in contract hiring, and a quarter foresee hiring more oil and gas professionals who work on a rotational schedule.

Pete Yanatan  |  July 27, 2014
Still those companies are reluctant to accept new entrants and lack vision and flexibility to offer training. Required experience is the other obstacle, that disqualifies marine proffesionals from other industries to enter. Cmon guys DP is not a rocket science, open the door for those who wish!
Joe Smith  |  July 25, 2014
My experience is that hiring companies have a major hurdle to overcome. And thats the amount of time a company takes to make a decision can and usually does range from two to four months
Steve Cooper  |  July 25, 2014
Most HR recruiters are also insisting on someone with a degree for a logistics position. One would think that over 30 years in the business on a global platform would be enough but apparently I now strike out on two counts: no degree and "too much" experience. Maybe I should do a 5-day MBA and lie about how long Ive been kicking around ...
David  |  July 25, 2014
Thats my point they dont want people that have more than 15 years of experience but yet they dont have there people in place to train the ones they bring in because they have forced the experience people to retire. (Companies keep wasting your money on training people that cant and dont want to be trained)
Tom Bath  |  July 22, 2014
Most companies are looking for very specific skill sets and specific software experience. They do not want to train highly qualified people who may not have exactly what they are looking for, e.g. conventional vs nonconventional geologist. There are plenty of qualified people, just unqualified employers who have no idea how to train good people like most companies did in the 70s, 80s, and 90s. Most companies also dont want anyone with over 15 years experience. They put in age discrimination terms like 5-15 years experience. So someone with 16 years experience is "unqualified" for the job? I think not. But they will be rejected by an HR person.
Most Popular Articles