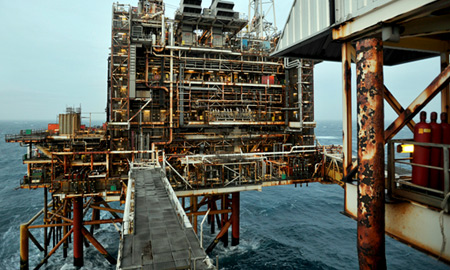 Britain's North Sea oil and gas industry faces a bleak future where more fields are likely to become uneconomic and shut in as platforms close - unless costs can be controlled, operators say.

LONDON, June 18 (Reuters) - Britain's North Sea oil and gas industry faces a bleak future where more fields are likely to become uneconomic and shut in as platforms close - unless costs can be controlled, operators say.

For some elderly platforms in the Northern North Sea, time is running out. If the industry does not get to grips with costs quickly, fresh investment is likely to dry up, forcing unsaleable rusting rigs to be abandoned.

"From a cost point of view, the chickens are coming home to roost," said Tim Walsh, senior vice president, asset integrity services at Lloyd's Register Energy. "If we don't see reductions in cost then there is a danger operators would face even greater challenges in maintaining asset integrity."

Some of these spiralling costs are driven by age. As production declines, fixed costs must be supported by smaller revenue streams, and with older platforms deteriorating, maintenance costs are building. Other cost increases have been laid at the door of services companies and input prices.

"As a harsh offshore area, the North Sea has always been intrinsically expensive, but that's now being exacerbated by the age of some of the facilities and the associated amount of downtime that's emerging," said Philip Whittaker at the Boston Consulting Group (BCG).

"In 2008 there were excessive margins in the system to squeeze the service providers, but now there isn't. So they have to look for a different way of doing business."