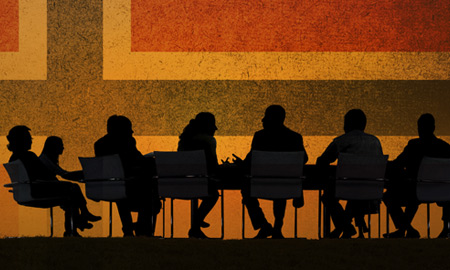 Mediation is taking place between Norwegian oil workers and the industry in an attempt to avert an oil strike at GDF Suez and Exxon platforms.

OSLO, June 17 (Reuters) – Mediation between Norwegian offshore oil workers and the industry began on Tuesday in an attempt to avert a strike at GDF Suez and ExxonMobil platforms, the Norwegian Oil and Gas Association said.

The unions have said they will initially put 230 oil workers on strike, cutting Norway's oil output by an estimated 100,000 barrels of oil per day, or about 7 percent of total capacity, if the mandatory talks at the state mediator's office fail.

The deadline for the talks is midnight on Tuesday (2200 GMT), although that may be extended by a few hours if the parties agree to do so.

Norwegian oil output averaged 1.5 million barrels per day in the first five months of 2014, according to data from the Norwegian Petroleum Directorate.

The talks cover some 3,500 offshore oil workers, and are centred on unions' demands regarding pension rights.

The Norwegian Organisation of Managers and Executives (Lederne) said it planned to put 76 workers on strike on the GDF Suez-operated Gjoea platform, if the talks fail.

That could also affect output from the Statoil-operated Vega field, tied to facilities at Gjoea.

The Norwegian Union of Energy Workers (Safe) has said it planned to put 154 workers on strike, affecting production from ExxonMobil's Jotun, Ringhorne and Balder fields.

A reduction of Norwegian oil output could add to global oil supply concerns already fuelled by the situation in Iraq.

In 2012, 10 percent of Norway's offshore workers went on strike for 16 days, cutting oil output by 13 percent and gas production by 4 percent, and helping to push oil prices to over $100 a barrel at that time.

While the scope of this year's strike could be smaller, because negotiations exclude the biggest union Industri Energi, it could still add to supply concerns.

The strike could cut Norwegian natural gas output by some 15 million cubic metres per day compared with the current total production of 240 mcm/day, but due to low summer demand production has been well below its full capacity of 350 mcm/day.

The government can stop the strike and impose a settlement if it is deemed to be a threat to Norway's economic interests. It did so in 2012 after oil firms threatened a full lockout.

Further mediation between the unions representing workers at onshore supply bases is expected to take place on June 19-20, the oil industry said.