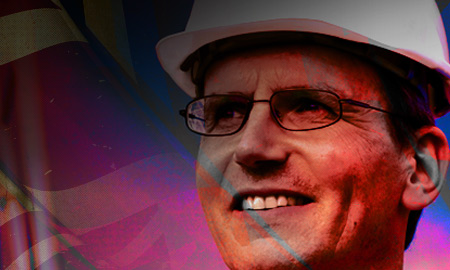 “While much collaborative work has been undertaken by industry, government and education, we are just not achieving the results the industry needs at the pace we need them,” Phelan noted. “Our company has doubled its annual turnover in the last two years and our workforce has grown by 40 percent in that time. The challenge, industry-wide, for specialist engineering companies like ours, is how to sustain this level of growth without adequate numbers of young graduates to fuel it.”

The answer, he stresses, is retention and education.

“Retention is about good strategic recruitment and ensuring that we not only find people with the right skill set but also with the right personality and cultural fit. While there are many rewards for bright engineers in our industry, these will only be realized through hard work and hands-on experience, so it’s important to recruit with the right level of determination and commitment to want to stay the course.”

Phelan was a key player in the development of the government’s Industrial Strategy, an initiative to bridge the skills gap and ensure continued growth for the oil and gas industry. The action plan, issued in March 2013, outlines how ex-military personnel with the relevant transferable skills can be retrained, enabling them to be redeployed within the industry. Another initiative Phelan discussed is the need to “map the skills shortage and perform skills gap analysis in order to provide the data to more closely match shortages with actions to generate suitable candidates.”

“The government clearly has a responsibility to ensure that academic institutions understand the requirements of employers, so by bringing industry and the government together, not only at the council level, but at sub-committee levels as well, there is certainly a more joined up approach than before,” he added.

As for education, Phelan also noted that schools have an important role to play in closing the engineering gap, with gender inequality in academic subjects still a major issue throughout education. Only a fifth of the girls who get an A in physics in General Certificate of Secondary Education go on to study the subject at A-levels, compared with half of the boys in the same position, according to data from the Department of Education and Institute of Physics.

“Engineering isn’t taught in schools and teachers, with no hands-on industrial experience themselves, are therefore understandably ill equipped to advise students on its potential as a career choice.  We need to educate the teachers and careers advisers so that they can provide accurate information and encourage able students to aim high in STEM subjects.  Teachers should be encouraged to get out into the engineering workplace to experience for themselves what the industry offers.”