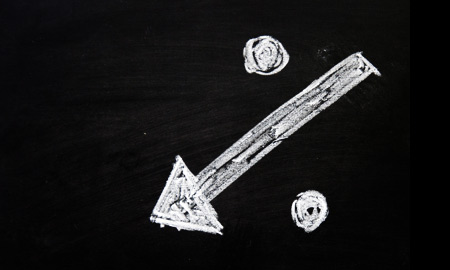 ExxonMobil expects oil and natural gas production to be flat this year as overall spending falls 6% to about $39.8 billion.

Investors who had expected production growth sent shares down 3 percent in earlier trading. The company's current outlook for output, provided at an annual meeting with investors, was adjusted from a year-earlier to exclude some volume from Iraq and Abu Dhabi, the company said.

"We took a set of low margin barrels off the base," Exxon Chief Executive Officer Rex Tillerson told investors.

Evan Calio, an analyst with Morgan Stanley, noted at the meeting that oil and gas production growth has been "elusive" for Exxon.

In recent years, Exxon and other large oil companies have invested record amounts on exploration and production projects to boost oil and gas output. Last year, Exxon spent $42.5 billion, an amount the Irving, Texas company describes as a peak.

Tensions between Russia and Ukraine have not yet disrupted Exxon's activity in Russia, where it is prospecting for oil and gas in Arctic waters, Tillerson told investors.

"We don't see any new challenges out of the current situations," said Tillerson, noting this would change if there was government action such as sanctions.

Still, the company has put on hold its pursuit of the Ukraine Skifska block in the Black Sea, it said.

For 2014, oil and gas production is expected to be 4 million barrels oil equivalent per day (boed), little changed from last year.

Growth is expected to pick up from 2015 to 2017, when production is expected to grow 2 percent to 3 percent as major projects add an additional 1 million boed.

"Production has been down for a few years. It explains why this stock is a weak performer. They are spending a lot of money, but they are spending to tread water," said Phil Weiss, chief investment analyst at Baltimore-Washington Financial Advisors.

This year, Exxon said it expects to bring 10 major projects into production, most of them targeting more profitable crude oil or other liquids.

"This is going to be a big year," Mark Albers, Exxon senior vice president told investors.

Shares of Exxon were down 2.75 percent at $93.88 in afternoon trading on the New York Stock Exchange.