Hiring Intentions Rise for US Oil and Gas Professionals

The majority (53%) of hiring managers in the oil and gas industry intend to hire more energy professionals in the first half of 2014 than the previous six months, according to a semi-annual hiring survey from Rigzone, the leading online resource for oil and gas information, data and talent recruitment. That’s up from six months ago when 48 percent of hiring managers said they planned to boost hiring in the back half of 2013. 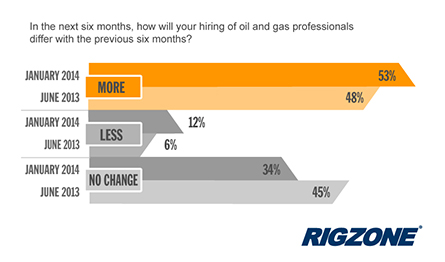 Optimism regarding the current economic or market environment is driving the rise, however, that outlook is not universal throughout the industry. While only one percent of respondents expect no hiring in the first half of the year, 12 percent expect the pace of hiring to slow down in the first half of 2014, as compared to just six percent who felt that way about the second half of 2013.

“When 99 percent of the industry is hiring at some level to start the year, oil and gas professionals have plenty of options to manage their career,” said Paul Caplan, President of Rigzone. “Top hiring priorities that we hear from energy companies:  engineers, health and safety professionals and production teams.”

Six in 10 hiring managers (61%) said they are not seeing an increase in the number of candidates applying for positions, as compared to six months ago. That’s up significantly from 48 percent of respondents who concurred at mid-year 2013.

Likewise, more than half of respondents (60%) said candidates were asking for more money, as compared to six months ago. That’s reverberating in the market, with 43 percent of hiring managers saying positions are going unfilled based on the compensation offered for the position. 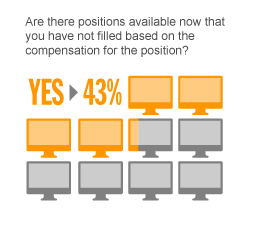 Energy companies are stepping up to retain current staff, with four in 10 hiring managers reporting offering more counteroffers to keep oil and gas professionals in their positions or seeing an increase in counteroffers from candidates’ existing employers.

The most sought-after professionals, according to hiring managers, are mid-career professionals or those with two to 10 years of experience in the workforce.

The Market for Engineering Graduates

For those hiring managers who are recruiting new graduates, the majority (55%) anticipate the 2014 class of engineers will have starting compensation above the 2013 class. A three percent year/year increase seems to be where hiring managers split, with 56 percent believing offers will rise at that level or less and 44 percent of hiring managers anticipating an even stronger increase. 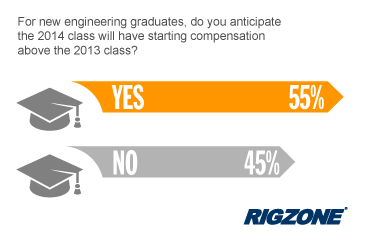 While there were votes from hiring managers across the spectrum of engineering disciplines as to which engineers will garner higher pay, the top rankings were for petroleum, mechanical, chemical and electrical, civil and software engineering graduates.

From January 7 to January 10, 2014, Rigzone surveyed hiring managers and recruiters who primarily recruit for U.S. energy professionals. Covering upstream, midstream, downstream, corporate and college recruiting, 142 responded to the survey, with 20 percent representing companies that have more than 5,000 employees.