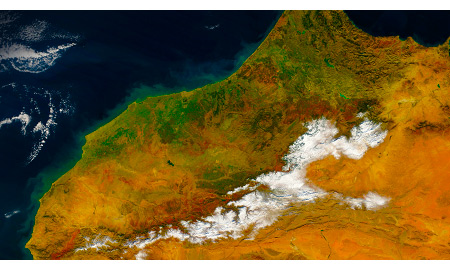 Fewer than 40 wells have been drilled offshore Morocco since oil explorers began looking for hydrocarbons there in the late 1960s. But the basins in this underexplored region are about to see a step-up in activity as independent firms target offshore Morocco as part of a wider campaign of drilling by the industry in the Atlantic Margin.

Cairn Energy plc has already begun drilling off the coast of the North African country, after starting its drilling campaign in October.

Cairn's first exploration well, the FD-1 well on the Foum Draa block, failed to find any reservoirs, although gas shows and gas composition ratios encountered in the well confirmed a deepwater hydrocarbon system in the area.

Cairn's next well in its Moroccan exploration program is located in the Juby Maritime III block, where Cairn is the operator with a 37.5-percent working interest (Genel Energy plc also holds a 37.5-percent working interest). This is targeting a Middle Jurassic carbonate prospect that is located in some 330 feet of water. The primary objective is around 3,280 feet below the 1969 Cap Juby oil discovery. Here, Cairn estimates a gross mean, un-risked prospective resource of around 73 million barrels.

Cairn is also hoping to see success from a well drilled on the Cap Boujdour Block later in 2014. This is scheduled to be drilled by Kosmos Energy Ltd. during the fourth quarter of the year. Cairn is acquiring a 20-percent non-operated interest via a farm-in agreement with Kosmos (which will retain a 55-percent stake) and the Moroccan government (25 percent). The prospect is estimated to contain resources that range from 500 million barrels of oil equivalent to 1 billion barrels of oil equivalent.

Kosmos is targeting two basins offshore Morocco: the Agadir basin and the Aaiun basin to the south, where the Cap Boujdour well will be drilled.

The Agadir basin – which oil major BP plc has farmed into leaving Kosmos with a 30-percent stake – is an unexplored salt basin where, according to the company, there is evidence of a working petroleum system as well as salt-related structures that are similar to those found in the Gulf of Mexico. Kosmos plans several exploration wells, with prospect sizes estimated to contain resources as big as 500 million barrels of oil. 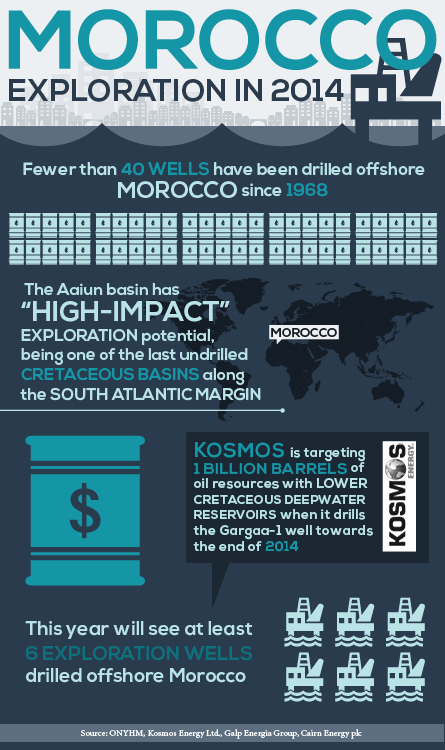