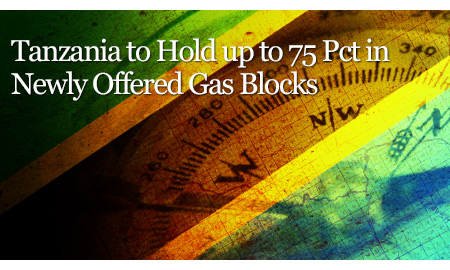 DAR ES SALAAM, Oct 25 (Reuters) - Tanzania, a hotspot for natural gas exploration, invited bids for eight blocks and said on Friday it would take a stake of up to 75 percent in each of the new production-sharing contracts.

"The production-sharing formula will either be 35 percent to investors and 65 percent to the government or 25 percent to them and 75 percent to us," Tanzanian President Jakaya Kikwete said when launching the country's fourth licensing round.

Tanzania, which has made big discoveries of natural gas off its southern coast, is offering seven deep-sea offshore blocks and one block in Lake Tanganyika.

"We will look at the possibility of selling TPDC's shares in production-sharing agreements through IPOs in the future if we want more Tanzanians to participate in the oil and gas industry," said Kikwete.

The deep sea offshore blocks are located in water depths of 2,000 to 3,000 metres adjacent to proven prospective blocks, while the Lake Tanganyika North block is in a water depth of 1,500-metres along the east African rift system, the government said in its bidding round announcement.