Massive Spending Ahead As Industry Develops US Shale 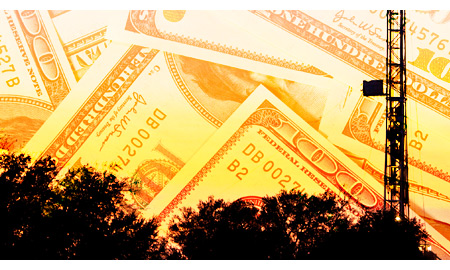 Now that the land grab of U.S. shale oil and natural gas acreage has ended, the oil and gas industry faces a new question – how it will fund the commercialization of unconventional resources.

Cash flow issues have already been seen among oil and gas companies seeking to develop shale, raising questions about financing and how companies will handle spending, according to a panel of industry experts at the Bloomberg Oil & Gas Conference Thursday in Houston.

With most major shale plays discovered and acreage leased, the time has come for the industry to digest and drill what they might have, said Ron Hulme, CEO of Parallel Resource Partners, during a panel discussion on the amount of investment needed to commercialize shale.

To date, 60,000 unconventional oil and gas wells have been drilled in the United States, but 500,000 drilling locations remain, meaning the industry has drilled a little more than 20 percent of this inventory, given current spacing and conditions.

The development of shale resources might prove the exception to the ability of companies to raise funds in capital markets, said Gray. Estimates of the amount of capital needed range from $2 trillion to $5 trillion, but the market capital of shale participants is less than $1 trillion. Companies currently are needing to go to capital markets for $40 to $50 billion a year of capital now and have been spending beyond cash flow, but some suggestions indicate that spending may double or triple. Fundamentally, the industry could face a $2 trillion gap in funding.

“Companies are spending one-third of their capital budgets on land, but need 100 times that amount to develop shale resources,” Hulme noted.

Hulme hopes to see companies use more private equity to fund shale activity. While the capital markets are always cheaper, companies have been reluctant to issue equity, thinking their stock price is undervalued. Instead, companies have leveraged up with debt to fund activity, but companies cannot sustain this usage and are getting beyond their collateral and cash flow to service acts. Over the past four years, $80 billion has been raised in private equity, a small amount of in the grand scheme, but that funding will help.

As a way of coping with higher capital investment requirements, companies are grappling with operational challenges and seeking to reduce costs and boost operating efficiency. Oil and gas companies can’t take all the credit for reduced costs, however, as the decline in prices for oilfield services across the supply chain has aided oil and gas companies in managing costs, said Chris Robart, principal with PacWest Consulting Partners.

Companies relied heavily on investment through joint ventures with foreign companies during the land grab and initial drilling phase, a trend that will continue due to Japan and Korea’s lack of natural resources and China’s need for help in commercializing its shale resources, said Robert F. Gray, Jr., a partner with law firm Mayer Brown. Japanese trading and electric companies have continued to look for investment in long-term opportunities following the 2011 earthquake and tsunami that crippled Japan’s nuclear power infrastructure.

While some companies have been burned by natural gas prices or stinker acreage – resulting in Royal Dutch Shell plc’s decision to unload Utica shale assets – foreign investors continue to show strong interest in U.S. shale instead of caution.

“If I had a nickel for every inquiry I got from foreign companies seeking to invest in U.S. shale properties, I would be wealthy,” Gray noted.

A number of Asian clients also are interested in entering the U.S. oilfield service business to position themselves for growth in the United States and outside North America, said Robart.

Some tension was seen among U.S. politicians over the China National Offshore Oil Corporation’s (CNOOC’s) acquisition of Nexen, which gave CNOOC access to Nexen’s U.S. Gulf of Mexico interests, but that has dissipated. Some Japanese companies, conscious of their reputation, have expressed concerns over environmental issues posed by hydraulic fracturing. However, hydraulic fracturing is becoming less of an issue in the United States, thanks to hydraulic fracturing disclosure rules in states like Texas and information sources such as fracfocus.org. To date, 45,000 disclosures have been made through fracfocus.org. Companies are now focused on addressing surface spills, but these are issues that industry has faced before.

Gray noted that even the U.S. Environmental Protection Agency has agreed that gas is a better fuel and fracking less damaging to the environment. Given the investment to improve safety and political figures such as California Gov. Jerry Brown and former Secretary of State Hillary Clinton speaking favorably on hydraulic fracturing, Hulme thinks concern over environmental fracturing is a policy issue from one or two elections ago.

The commercialization phase of shale means the industry will shift from a real estate model. In the land grab phase, small teams of buyers who’d left major oil companies would be recruited by private investors to acquire large acreage positions and conducting some drilling activity. These teams might buy 50,000 acres and run one rig a year, and acquire acreage at $500 an acre and sell for $5,000. Now, the ownership model will change, with smaller amounts of acreage being acquired, more rigs running and longer term activity.

This shift will require lots of capital and new skill sets. Before, glorified headhunters, or landmen like Aubrey McClendon, were required; now, the approach is technical, with geologists and engineers needed. Instead of one great geologist or landman who found a position, an institutional or corporate approach is needed, such as a proven organization that can run multiple rigs and has management processes in place to produce shale.

Hulme said that companies that lack the execution capability for shale plays are being turned down for investment capital.

“Lots of people want in, but it’s getting hard to enter the market.”

Service prices are generally expected to remain flat, even as the number of horizontal wells in the United States is expected to grow by 4 to 5 percent in 2013, and in 2014 and 2015. Hobart said service prices will remain flat as more service capacity comes into the market and operations become more efficient.

Service companies are looking to acquire the latest technology in water treatment and other services to differentiate their service from their competitors and charge higher prices. Water treatment, recycling and transportation remain hot topics in the oil and gas industry, particularly states that have experience droughts. While the amount of water used in the Permian, Barnett and Eagle Ford shale plays is one-twentieth the amount of water used on golf courses, water usage remains a significant political issues, particularly in densely populated parts of the state.

Hobart has not seen a favored technology on the water side due to the variations of water quality in shale plays –while a technology might work in one play, it may not be effective in another play. The big three service companies have been snapping up water treatment technology either to lock up competing technologies or to have on hand as needed.

Sharma Dronamraju  |  October 25, 2013
Good review of the situation now after aggressive land grab phase in us and international shale exploration. Economics have certainty shifted from capital intensive to operational expenses. One needs more than money to make money out of shales now. A lot depend on people you hire, especially in geoscience.