Barnett Shale: Down, But Not Out 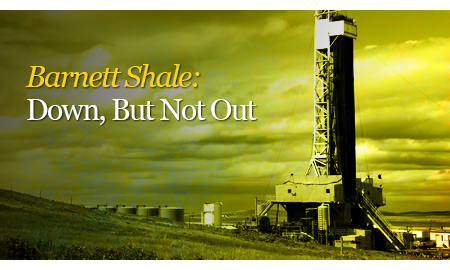 While natural gas production in the Barnett Shale is gradually slowing, the play is forecast to remain an important and viable natural gas source for several decades, according to the “Sloan Foundation Shale Gas Assessment Study” by the University of Texas at Austin’s Bureau of Economic Geology.

Production in the Barnett Shale peaked in 2011, but has since fallen by about 20 percent, according to the study.

Production data from more than 16,000 wells within the Barnett was examined, and the study looked at the production history of each well before determining what areas remained to be drilled. The study used a base figure of $4 for a thousand cubic feet of natural gas. However, in determining how much natural gas operators will be able to extract economically, variations were allowed for in price, volume drained by each well, the economic limit of the well and other parameters.

BEG is expected to complete three more studies of major shale formations in the United States by year’s end.

Kevin Green  |  September 26, 2013
A long Cry from Chesapeake Shale TV with Tommy Lee Jones doing half hour infomercials on how this boom would never end and why you want a HZ gass well in your yard.