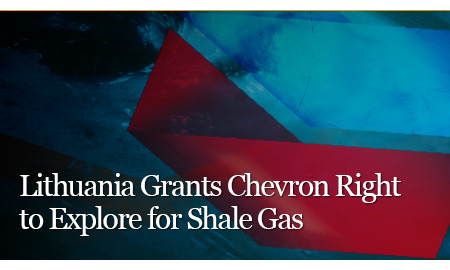 VILNIUS, Sept 3 (Reuters) - U.S. energy major Chevron has won a tender to explore for shale gas in western Lithuania, the government said on its Twitter feed on Tuesday, as the Baltic state tries to wean itself from its dependence from Russian gas.

Chevron was the only bidder to explore for unconventional hydrocarbons in the 1,800 square kilometre Silute-Taurage prospect, which Lithuanian experts estimate might hold up to 80 billion cubic metres (bcm) of technically recoverable shale gas.

"It was decided to announce U.S. Chevron as winner of the shale gas exploration tender in Lithuania," the government said on Twitter after a meeting of the ruling coalition.

"This is the opinion of the prime minister and the whole government after the coalition meeting," the spokeswoman for the Prime Minister Algirdas Butkevicius told Reuters.

The Baltic state gets all its gas from neighbouring Russia and has said Gazprom overcharges Lithuania.

The European Commission (EC) has started an investigation into Gazprom's pricing policy in the Eastern Europe.

The latest gas market report from the EC showed Lithuania paying the highest wholesale gas price in the European Union ().