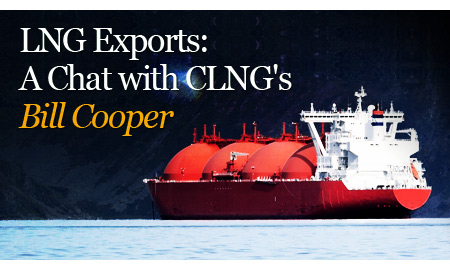 Rigzone recently featured a series of articles highlighting different viewpoints from prominent individuals on the issue of exporting liquefied natural gas (LNG) from the United States. Shortly after the six-part series ran, the U.S. Department of Energy (DOE) added a new "twist" to this evolving story by granting conditional approval to a third LNG export terminal: BG Group and Energy Transfer Partners' Lake Charles Exports project in southwestern Louisiana. The two other LNG export terminal investments include Cheniere Energy's Sabine Pass Liquefaction Project and the Freeport LNG Liquefaction and Export Project, which is owned by ConocoPhillips, Dow Chemical, Osaka Gas and others.

As the head of a trade association of LNG producers, shippers, terminal operators and developers, Center for Liquefied Natural Gas (CLNG) President Bill Cooper is naturally pleased with the latest DOE action on the LNG export issue. However, he finds the pace at which DOE has rendered LNG export decisions too slow.

Cooper points out that many more applications for LNG export projects await action from DOE. Moreover, he stated in a subsequent CLNG press release that comment periods for 16 of the 19 pending applications have closed.

"[T]here should be no new information to consider," remarked Cooper. "The facts are clear: increased LNG exports will unlock significant benefits to our economy, workforce and trade partnerships. It is time for DOE to follow its rules and act quickly on the pending applications."

Following DOE's Aug. 7 decision on the Lake Charles project, Rigzone contacted Cooper for his insights on this latest development as well as the broader dialogue about LNG exports among various stakeholders. A transcript of his conversation with Rigzone follows.

Rigzone: How would you characterize the overall direction of the LNG export debate in the United States, and what does this mean for proponents of the burgeoning LNG export sector in this country?

Cooper: Over the past year, as the benefits of LNG exports have become increasingly clear, support from policymakers across the country has grown steadily. Leaders and experts in energy, trade and labor support U.S. natural gas exports because of the economic and geopolitical benefits. There is also strong bipartisan support in Congress – 110 Members of the House and 34 Senators have sent letters urging DOE to move forward with processing pending applications.

Hopefully, DOE will fulfill its obligations to timely process the pending applications.  The Sabine Pass, Freeport and Lake Charles decisions are a good start.

Rigzone: What key points are receiving the attention they deserve in the debate?

Cooper: It is understood that due to our abundant natural gas resources LNG exports will have a minimal impact on natural gas prices and won't undermine domestic consumers. Again, as the DOE's commissioned third-party NERA report found, "all export scenarios are welfare-improving for U.S. consumers." The geopolitical implications and effect on our trade balance have also been recognized – specifically the global economic and environmental benefits that will come when our trading partners have access to an affordable, clean-burning fuel source.

Rigzone: What key points are being understated, mischaracterized or ignored?

Cooper: A key point that is sometimes lost in the debate is that LNG exports represent a significant investment into the U.S. economy. Each one of those terminals represents a multi-billion dollar investment and according to the U.S. International Trade Administration, each $1 billion of exports will result in 5,555 new jobs. Therefore, $13 billion to $25 billion worth of LNG exports would mean the creation of 70,000 to 140,000 new jobs. These jobs would not only be created at each facility, but throughout the value chain – in natural gas production, steel fabrication, turbine manufacturing, pipefitting and many other industries across the country.

Rigzone: What are your thoughts on the idea – espoused by the petrochemicals and other manufacturing sectors – that large-scale LNG exports should be restricted to countries with free-trade agreements (FTAs) in place with the United States?

Cooper: Although many in the manufacturing sectors support LNG exports based on free trade principles, some are critical of LNG exports. The reasons vary but generally are driven by a lack of understanding of the regulatory process and a misbelief that hoarding resources means prices will remain low.

Rigzone: As you know, public gas utilities are on record opposing large-scale LNG exports – period. They argue that a relatively broad spectrum of stakeholders would benefit from the shale revolution if we keep domestically produced natural gas at home rather than ship the raw material overseas. In addition to benefiting manufacturers and electricity consumers, they contend that keeping the gas in the U.S. would promote energy security and help the environment. How would you counter these arguments?

Cooper: The overwhelming weight of evidence introduced in the various dockets before DOE and tremendous number of publicly available studies stand in direct contravention to their claims. In fact, in the three decisions DOE has issued granting approvals for LNG exports to non-free trade agreement countries, DOE addressed those arguments, which were submitted by the American Public Gas Association (APGA) by stating:  "APGA's protest was not supported by any significant analysis."  If APGA had "any significant analysis" in opposition to U.S. LNG exports, I am sure they would have presented it.

Rigzone: Earlier this summer you testified before the House Energy & Power Subcommittee offering CLNG's perspective on the regulatory process for approving LNG export projects. Please summarize your organization's concerns about how liquefaction terminal proposals are being reviewed by regulators?

Cooper: Even with [DOE's] approval of Lake Charles Exports, our concern is that this process has been an unnecessarily slow one. Pursuant to its own rules and regulations, once the comment period closes, DOE can decide the case on the official record. The mere passage of additional time does nothing to add to that official record and thus a decision should be made within a reasonable time after the closing of the comment period. That has not been happening. It is time for DOE to follow its rules, process these applications and allow competition in the marketplace to dictate success. As DOE's Policy Guidelines state, "The federal government's primary responsibility in authorizing [exports] will be to evaluate the need for the gas and whether the [export] arrangement will provide the gas on a competitively priced basis for the duration of the contract while minimizing regulatory impediments to a freely operating market." Delaying decisions on the pending applications is an unnecessary regulatory impediment that can be minimized.

Rigzone: How does the impact of the current regulatory process extend beyond those with a direct stake in LNG export terminals (i.e., natural gas producers, terminal developers, engineering and construction firms, et al)?

Cooper: A delayed process at DOE has a negative impact on not only the natural gas industry, but America's economy as a whole. While these projects have been pending, capital has been kept on the sidelines that could be better spent building strategic LNG infrastructure and creating much-needed jobs. Lack of decision-making at DOE means we're stalling on opportunities for further investment into the United States. These projects are pleading with DOE to let them invest billions of dollars in our communities that are hurting badly and DOE is asking them to wait at the door.

Rigzone: The United States enjoys an advantage in terms of the technology and expertise needed to commercially produce its abundant shale gas resources, but it is certainly not the only country that could become a major LNG exporter. Under the status quo, do you believe there is a genuine risk that the United States will miss a golden opportunity in terms of LNG exports? Why or why not?

Cooper: It's true that the U.S. is uniquely positioned to benefit from LNG exports, but only if we act now. Worldwide demand for LNG between 2020 and 2025 is projected to be around 60 billion cubic feet per day, up from approximately 37 billion cubic feet per day today. The gap between future demand and current capacity makes the global LNG market attractive; however the U.S. is not the only nation capable of seizing this opportunity. It comes down to whether the United States will be the one to fully take advantage of the economic benefits on the table, or whether others reap the rewards.

Rigzone: Are there any other points about LNG exports from the United States that you would like to convey to those reading this article, some of whom will disagree with CLNG's position on the matter?

Cooper: It wasn't that long ago that the U.S. was facing the need to import natural gas from abroad to meet demand. At that time, many more LNG import projects were approved than ended up being built, illustrating the natural restrictions of the market. The same is true for proposed export projects – approving pending applications does not equate to a fixed and certain amount of exports. This is a market-limited opportunity, but an opportunity with real benefits for Americans. It's up to the United States to seize that potential by harnessing our resources and bringing those economic benefits home.

michael  |  August 24, 2013
This is all so very typical of CEO greed. The usual rationale of play the fear card (energy prices), then play the profit card (missing the profit for our economy), then the get rich quick card, (for the already wealthy investors), then the get out of town card, (for the CEO and offshore accounts--before jail). None of this Bone-Head Harvard MBA greed training ever entertains the idea that it is possible to sustain an energy source long enough to supply our own grandchildren.That is because they are all convinced their personal fortunes will last longer then the 50 years of gas they sell.
Boris  |  August 22, 2013
We have nearly unlimited gas resources (100 years? even at 50 years that could be considered unlimited in a practical sense). Our "energy security" will not be harmed in any way. Please explain how the US would have its security depleted by becoming more wealthy?
Robert Godfrey  |  August 19, 2013
To imply that US energy security will not be depleted along with the natural gas being exported is disingenuous.