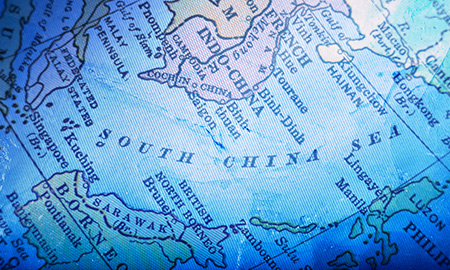 Rigzone Looks Back: Decades-long territorial disputes between China and smaller Southeast Asian states in the South China Sea have frozen the exploration and development of potential petroleum resources. A unilateral attempt by China to proceed with the development of such resources is expected to be greeted with political and diplomatic challenges from rival claimants. This article pointed to joint development being an option to defuse tensions and tap the petroleum resources. The question is whether the claimants are prepared to reach a solution to the dispute.

Foreign Ministers of the 10-member Association of Southeast Asia Nations (ASEAN) states held their annual meeting with dialogue partners, including China and the United States, at the ASEAN Regional Forum in Bandar Seri Begawan, where the South China Sea territorial dispute – particularly between ASEAN-member the Philippines and China – were on the discussion agenda.

Tension over the territorial spat has escalated in recent years as China became more assertive – to the extent of warning rival claimants not to engage in any oil and gas exploration in the area – in its claims over the South China Sea. The more assertive approach from China – underpinned by stronger naval might – towards rival claims, especially over the Spratly Islands and Paracel Islands, manifested itself in several incidents in recent years.

Vietnam and the Philippines also protested as China sought to entrench itself in the disputed territories in July 2012 when it established Sansha city as an administrative center in the Paracel to oversee “Chinese” territory in the area including the Paracel and Spratly Islands. Philippines deemed these incidents to be sufficiently provocative and raised the matter to a United Nations (UN) tribunal under the UN Convention on the Laws of the Sea to challenge the Chinese claims in the area.

China, on the other hand, was becoming more concerned about a greater U.S. presence in the South China Sea. The U.S. Navy was becoming more visible and an increased naval co-operation between the U.S. and the Philippines in the region was not welcomed by China. This was despite U.S. stating that it was only interested in helping the rivals to seek a peaceful resolution in the South China Sea dispute and not side with any of the protagonists.

The South China Sea, which stretches from Singapore and the Strait of Malacca in the southwest to the Strait of Taiwan in the northeast, is one of the world’s major trading routes. Its rich marine and potentially vast energy resources make control over the area particularly attractive for the claimant states from a strategic and economic viewpoint. China’s claim over the South China Sea has been challenged by four ASEAN members – namely Malaysia, Philippines, Vietnam and Brunei.

“The core issue (in the territorial dispute) is that China has taken the position that they have indisputable sovereignty over nearly the entire South China Sea,” Philippines Foreign Minister Albert del Rosario said at the Brunei meeting July 3 as reported by Reuters.

On their part, the four ASEAN states are reluctant to compromise on the territorial spat, especially over the sensitive issue of sovereignty. Without any compromise, it would be difficult for the claimants to achieve agreements to jointly develop – whether on a multilateral or bilateral basis – the potential resources in the area, including oil and gas.

So far, there is no official data on the energy reserves in the South China Sea due to a lack of exploration activity arising from the ongoing territorial spats. Some estimates are however available, including one from the U.S. Energy Information Administration (EIA), which assessed in its Feb. 7 report that the South China Sea holds approximately 11 billion barrels of oil reserves and 190 trillion cubic feet (Tcf) of natural gas reserves. These figures represent both proved and probable reserves, making them closer to a high-end estimate, the EIA added.

Estimates by energy consultancy Wood Mackenzie indicated that the South China Sea contains only 2.5 billion barrels of oil equivalent in proved oil and gas reserves, the EIA said in its report on the disputed area. CNOOC was more optimistic in its forecast in November 2012, when it assessed that the region holds around 125 billion barrels of oil and 500 Tcf of natural gas in undiscovered resources. CNOOC’s estimates have not been confirmed by independent studies.

Given the impasse in resolving the protracted South China Sea disputes, China has often called for joint development of the resources, including oil and gas. China’s position was supported by Malaysia’s Prime Minister Najib Razak recently, when he cited the Malaysia-Thailand joint development area in disputed waters between the two neighboring countries as a precedent which could serve as a model for the protracted dispute in the South China Sea.

“Agreeing to share prosperity (in the South China Sea), rather than let is divide us, is infinitely preferable to the alternative,” Najib said, as reported by Bloomberg.

“Overall, joint development arrangements potentially offer a highly attractive option to circumvent disputes and proceed with development activities in broad maritime areas subject to competing claims … entering into a joint development arrangement as a ‘provisional arrangement of a practical nature’ is an accepted legal option … Such joint mechanisms also enable utilization of resources in disputed areas and at the same time, are without prejudice to existing claims,” Leonardo Bernard, research fellow at the Center for International Law at the National University of Singapore, said in his presentation to the CSIS Conference.

In this regard, China and Vietnam might have taken a first step in this direction. In June, the two countries extended to 2016 a joint oil and gas exploration agreement in the Gulf of Tonkin. CNOOC and PetroVietnam commenced joint explorations in 2006 in the area, which is located north of the Paracel and Spratly Islands, but found no commercial reserves despite carrying out a 3D seismic survey and drilling of one well. Both countries have expanded the joint exploration area to 1,574 square miles, from 595 square miles in the earlier arrangement. CNOOC and PetroVietnam agreed to an even split in operational responsibilities and costs, and will move into joint production if commercial oil and gas reserves are found.

However, the China-Vietnam joint exploration agreement could have been attributed to Beijing’s attempt to strengthen its hand in the South China Sea territorial dispute given a more visible U.S. naval presence, which has indirectly encouraged the Philippines to be more aggressive in defending its claims to the area.

“Philippines has traditionally been an American ally [but] Vietnam is a different story. It was hostile to the U.S.,” Dr. Hooman Peimani, Principal Fellow, Energy Studies Institute in Singapore said.

“China’s objective is not to push Vietnam to the U.S. … [so it] makes sense for China to work with Vietnam,” Peimani added.

While joint development is a possible way to tap the energy resources in the disputed area, this approach is not likely to succeed in the foreseeable future given strong nationalistic sentiments over each countries’ claims to the South China Sea.

Tensions over the South China Sea dispute eased a little after foreign ministers from ASEAN and China agreed at their Brunei meeting to hold detailed discussions in China in September on a "full and effective" implementation of the declaration on the conduct (DOC) of parties in the area, as indicated in the Chairman’s statement of the Third East Asia Summit Foreign Ministers’ Meeting July 2. The DOC will serve as a precursor to a legally binding code of conduct (COC).

Participants in the September talks will discuss "when and how" formal consultations on a COC will begin, said ASEAN Secretary General Le Luong Minh as reported by Dow Jones. The COC would however not discuss the territorial claims by the disputing countries but would set “rules” for actions by ships as the objective is to minimize any misstep that could escalate into a conflict.

“Perhaps a multilateral, rather than bilateral, joint [oil and gas] development may be more effective on the basis of inclusiveness rather than exclusiveness,” Nur Azha Putra Bin Abdul Azim, research fellow at Singapore’s Energy Studies Institute said.

Whether joint or multilateral development of energy resources in the South China Sea is a viable option will ultimately depend on the desire of each claimant to compromise and put aside their territorial disputes in order to focus on a mutually beneficial outcome. Based on the current geopolitical situation in the region, that may still be a long way off.