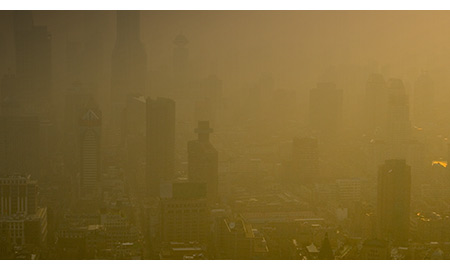 The smog – or haze as it is commonly referred to in Southeast Asia – has engulfed parts of Malaysia, Indonesia and Singapore in early June with thick, choking smoke. The haze, triggered by forest fires in Indonesia’s Sumatra Island, led to concerns that it may cause some disruptions to the energy industry. After all, the region is an operational base for upstream oil and gas companies engaged in exploration and production. It is also home to shipyards that fabricate offshore energy infrastructure as well as the location of a critical sea lane – the Straits of Malacca, which is one of the world’s energy transit chokepoints.

The haze has become a recurrent trans-boundary phenomenon in Southeast Asia since the late 1990s. Between May and September – and occasionally stretching to October – each year, dry wind sweeping through Sumatra blows the forest fire-induced haze in the direction of the three countries. The haze is often a direct result of slash-and-burn activities by palm oil companies in Sumatra and the problem only dissipates when the rainy season arrives in the region in November.

Over the past decade and a half, people in Indonesia, Malaysia and Singapore had learned to cope with the yearly haze season. This however changed in June as the fires in Sumatra became particularly bad. Satellite pictures from the United States’ National Aeronautics and Space Administration (NASA) showed that the Riau province in Sumatra was the location of almost all of the fire hotspots that have seen Singapore and parts of Malaysia blanketed with the worst haze and air pollution since 1997, the World Wildlife Foundation (WWF) – a global environmental organization group – said that in a news release.

“More than 9,000 fire hotspots were mapped in Sumatra by NASA satellites between June 1 and June 24, with more than 8,000 in Riau province … fully 88 percent of hotspots were in peatland, where fires can trigger huge emissions of carbon,” WWF added.

Air pollution indices rose rapidly as the haze thickened from mid-June, with air quality readings in the three countries crossing into the hazardous level.

Two aspects of this man-made disaster can disrupt living conditions for most people, namely reduced visibility and higher concentration of air pollutants.

“More pollutants … reduce the clarity and color of what we see … (and) exposure to very small particles in the air has been linked with increased respiratory illness, decreased lung function, and even premature death,” according to the United States Environmental Protection Agency.