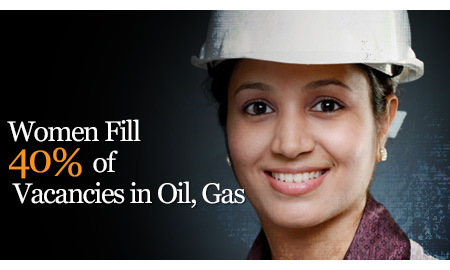 In the first quarter of 2013, more women than men entered the oil and gas industry. Specifically, about 3,900 positions were added in the oil and gas sector with about 46 percent of these positions, or 1,800 positions filled by women, according to the Bureau of Labor Statistics. Since 1991 (when the Bureau of Labor Statistics began tracking this trend), there has never been a year where more than a third of new hires in the industry have been women.

"While there is a concerted effort to recruit women into the field, that number stands alone in this recovery and only time will tell if its sustainable," said Paul Caplan, president, Rigzone, in a recent interview.

Many of the filled positions are not on oil rigs, but instead are in offices as technicians, geologists or engineers.

"I see more and more women and minorities within my company every day," said Kelly Emanuel, NAM credit manager at Weatherford International. "It makes me feel good knowing that they are willing to hire the best candidates for the job despite their gender or ethnic background."

Oil and gas companies are actively recruiting women with many launching internal goals for gender representation among senior leadership. BP plc has a goal of raising its percentage of female group leaders to 25 percent by 2020, according to the company's 2012 Sustainability Review. In 2012, 17 percent of the group leaders were female, up from 9 percent in 2000.

This goal reflects a broader rise of women in the workforce as a whole.

mL  |  September 24, 2015
@Kenton Cooke You are funny. While on the rig in NEPA as a rockhound, I got out there and did a rough necks job as well. The guys I worked with could attest to the fact I worked ten times harder than the worm hands ever had as well as some of the more senior guys. Being closed minded to women on a drilling rig is sad.
kenton cooke  |  July 05, 2013
as long as they stay in office they will be a good asset to the oilfield they do not have any part of drilling rig opertations
Robert Green  |  July 04, 2013
While can appreciate Ms. Jewells desire for the Oil & Gas industry to hire a more diverse range of employees, in line with her politically correct management, it is really NOT HER JOB to determine who is or is not qualified to do the jobs the sector has. She should be talking directly to the Department of Education to stress the importance for teaching science, mathematics and writing skills needed to understand and transmit the technical and safety information that is required as the jobs get increasingly complex. She should also look at what the Australians are doing with technical schools in Western Australia in an effort to train people for the LNG work there and train them in HSE as the industry grows and their efforts to protect their environment increase three-fold.