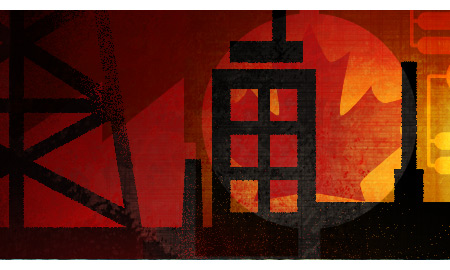 Last week the Canadian Association of Petroleum Producers (CAPP) released its 2013 crude oil, markets and transportation forecast. This year’s CAPP forecast boosts its previous projection of future oil output in 2030 by 500,000 barrels a day. The new CAPP forecast is 800,000 barrels a day higher than the most recent forecast from the International Energy Agency (IEA). Of the additional oil in the CAPP forecast, just 200,000 barrels a day is projected to come from higher oil sands output while an additional 300,000 barrels a day should come from conventional oil resources. The new forecast suggests that there are good days ahead for the Canadian petroleum industry – both producers and oilfield service companies. One of the important aspects of the forecast is its implication of future prospects for the various oil producing provinces of Canada. The report also highlights the need for Canada to seek new consumers for its growing oil output beyond North America’s shores.

The CAPP oil output forecast comes at an interesting time for Canada and its petroleum industry. Two significant export pipeline projects to move more conventional oil from Canada and increased bitumen production from Alberta are struggling to attain approval either from the United States government in the case of TransCanada’s Keystone XL pipeline and from British Columbia with regard to Enbridge’s Northern Gateway pipeline. This year’s CAPP forecast marks the second consecutive year the organization has increased its estimate of Canada’s future oil output by a significant amount. These increased Canadian output projections are consistent with virtually every other oil forecast of future production volumes for major oil producing countries made by government and private analysts during the past several years. These forecasts are acknowledging the impact of oilfield technology on the capability of the petroleum industry to tap difficult-to-produce
shale and tight oil resources globally.

To demonstrate the significance of the increases in the two most recent forecasts issued by CAPP, we present the output projection charts from the 2012 and 2013 reports that show the sources of Canada’s future oil supply. It is not surprising that in both forecasts the oil sands output forms the backbone of Canada’s oil supply. What can be seen when looking at the output mix in 2030 is that in the 2013 forecast total output is about 6.7 million barrels a day compared to the 6.2 million barrels a day projection from the 2012 forecast. 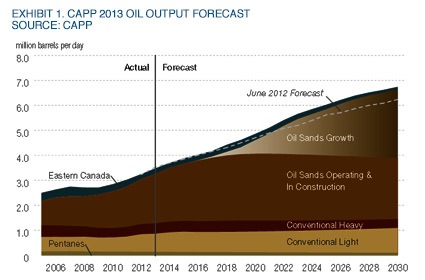 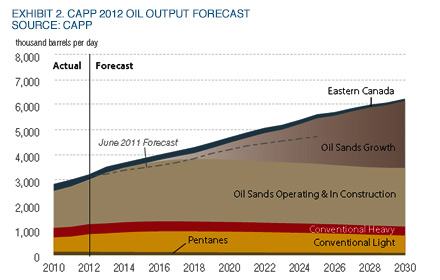 The CAPP forecasts also show the split between conventional oil output and the bitumen produced from the oil sands. As the charts in Exhibits 1 and 2 highlight, within the respective crude oil forecasts there are separate forecasts for light conventional oil and heavy conventional oil, pentanes, offshore oil (Eastern Canada) and oil sands output segmented into the production that will come from existing operating mines and in situ operations and those under construction along with a projection for the volumes to come from future development projects not currently underway.

When we compared the 2012 and 2013 forecasts by all these categories, we find some interesting shifts in the outlook between the two forecasts. Our analysis is shown in Exhibit 3. The first interesting observation is the higher level of Eastern oil in the 2013 forecast, which is Canada’s offshore oil production at each measurement point between 2015 and 2025. However, by 2030 the two annual forecasts arrive at the same output estimate. It is also interesting to note that within the West oil forecast the volume of conventional crude oil is projected to climb throughout the entire forecast period in the 2013 forecast while the 2012 forecast projected a decline. The 2013 oil sands forecast projects a slightly
lower volume in 2015 compared to the prior year’s forecast but then is higher at all subsequent forecast years. Another observation is that the pace of oil sands output growth accelerates from 2015 to 2025, but then the growth rate slows by 2030. 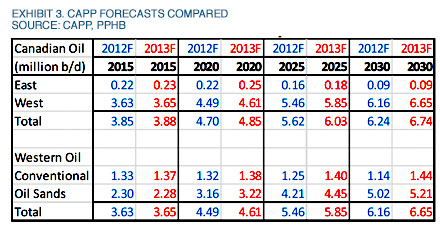 When we focus specifically on the Western Canadian oil production forecast, the chart in Exhibit 4 shows that  conventional light oil output is projected to increase until 2020 but then declines. Heavy conventional oil output is projected to expand throughout the entire forecast period. Within the oil sands category, bitumen obtained from mining operations grows throughout the entire forecast period but faster growth will be experienced by bitumen produced from in
situ operations.