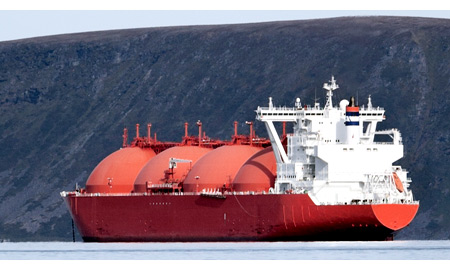 The $5.25 billion Panama Canal expansion project coincides with the planning and development of infrastructure to export large volumes of natural gas from the United States. The Panama Canal Authority is taking steps to capture a share of this emerging source of business by adjusting its operational plans for the important Central American waterway.  Approximately 1,700 miles to the northwest, on the Texas/Louisiana Gulf Coast, two companies instrumental in selling liquefied natural gas (LNG) and liquefied petroleum gas (LPG) produced in the U.S. view the project in Panama as a means of reaching more customers.

"The canal widening will improve the competitive position of LNG exports from the Gulf Coast while providing buyers in Asia with more opportunities to source supply," said Andrew Ware, spokesperson for Cheniere Energy, Inc. "It should benefit buyers and sellers alike in the global LNG market."

Cheniere is building the initial two liquefaction trains at its LNG receiving terminal in Cameron Parish, La., but the company plans to launch a second phase of construction on two additional trains this year. It expects to obtain authorization from the Federal Energy Regulatory Commission (FERC) next year to begin construction on the two additional trains that will comprise the third and final phase of the project. Each of the facility's six liquefaction trains will have a nominal LNG processing capacity of 4.5 million tons per annum (mtpa). As of last month, Cheniere had already entered into commercial contracts for LNG from all but one of the planned trains. The first two trains should begin operations by 2016. Trains 3 and 4 and trains 5 and 6 are expected to start up in 2017 and 2018, respectively.

The canal expansion project is "supportive" for Cheniere's Sabine Pass project but is not a major factor behind the company's decision to develop the export facility, said Ware.

"More critical is the transformative impact of unconventional gas development in the U.S., and our ability to build the project at a globally competitive cost," he said.

"There is strong international demand for U.S. propane and we continue to receive strong indications of interest for long-term commitments from customers that could underwrite another expansion of the export facility," stated Enterprise Chief Operating Officer A.J. "Jim" Teague in a March 7 press release announcing the start-up of the expanded export facility.

Like Cheniere, EPD welcomes the Panama Canal expansion but does not consider it a key driver behind its capital spending decisions. EPD spokesman Rick Rainey pointed out primary justifications for adding LPG export capacity, including:

Rainey noted the canal expansion will help EPD  diversify its geographic customer base. Seventy-seven percent of the 46 million barrels of propane that EPD loaded at its Texas export terminal in 2012 was shipped to ports in Mexico, Central America, South America and the Caribbean. Only 3.7 million barrels – less than 10 percent – went to the Far East. Rainey said the wider canal, which will no longer be off-limits to larger ships carrying greater volumes of LPG, should improve the economics of using the Houston facility as a starting point for trans-Pacific voyages.

Although the Panama Canal expansion will support incremental growth for Gulf Coast exporters such as Cheniere and EPD seeking to penetrate Asian markets, a Houston-based attorney who specializes in industrial engineering, procurement and construction (EPC) views it as a conduit for closer commercial ties to one Far Eastern country in particular.

"I expect gas exports from the United States to South Korea will grow dramatically once the canal expansion project is completed and most, if not all, of those exports will come from facilities along the U.S. Gulf Coast," predicted David Delman, a partner with the law firm Hogan Lovells and a former executive with the multinational EPC company Chicago Bridge & Iron, N.V.

South Korea is attractive to U.S. LNG exporters for two key reasons: a high differential in natural gas pricing and a low barrier to trade with the United States, Delman said.

"South Korea … is not only the world's second-largest importer of LNG, it enjoys the second-largest free trade agreement [FTA] with the United States," said Delman.

The U.S. Korea Trade Agreement (KORUS FTA) is projected to be second only to the North American Free Trade Agreement (NAFTA) in terms of the amount of trade that will pass through the treaty, Delman added.

South Korea's LNG price spreads are among the highest worldwide, making that market very attractive for companies selling LNG. Citing wellhead and city gate price projections in a recent NERA Economic Consulting report to the U.S. Department of Energy, Delman observed that LNG price spreads between the United States and South Korea are projected to remain solid for more than two decades. Comparing the differences between projected city gate prices and wellhead prices through 2035 (from figures 53 and 54 on page 83 of the report), one can see that the average price spread for Japan and South Korea should exceed $11 per million British thermal units (MMBtu) through 2035.  By comparison, the average projected differential for China and India is approximately 13 percent lower. The table below compares the NERA report's projected differences between selected city gate prices and U.S. wellhead prices through 2035.

Because the above figures from the NEPA report aggregate  spreads for Japan and South Korea, they conceal an important edge that the latter country enjoys over its Far Eastern neighbor. Delman explained that KORUS FTA puts South Korea in an enviable position because it eliminates the permit approval process required by the U.S. Natural Gas Act (NGA).

The NGA "requires the U.S. Department of Energy to evaluate applications based on the 'public interest' to export LNG from the United States," he said. "LNG to FTA countries, such as South Korea, are deemed to be in the public interest."

The NGA states that permits deemed to be in the public interest "shall be granted without modification or delay," Delman added.

"Accordingly, and by virtue of KORUS FTA, South Korea enjoys the lowest barrier to trade, in as much as no other Asian country – including Japan – has concluded a free trade agreement with the United States," Delman said.

Not Yet a 'Game-Changer'

Delman anticipates robust LNG trade between the United States and South Korea as a result of the Panama Canal expansion, but he cautions that dubbing the newly widened canal a "game-changer" in terms of global LNG movements may be premature.

"The canal expansion will almost certainly increase LNG exports from the United States to Asia, given that LNG demand in Asia should continue to be strong and the gas price differential between the U.S. and Asia markets remain wide," noted Delman. "To be a 'game-changer,' however, something else has to come into the mix; namely, additional FTAs with other Asian nations – most notably Japan and the 'mother of all markets' China."

"While strong Asian demand and solid price differentials appear to be a pretty good bet, concluding FTAs with Japan and China may prove far more difficult."