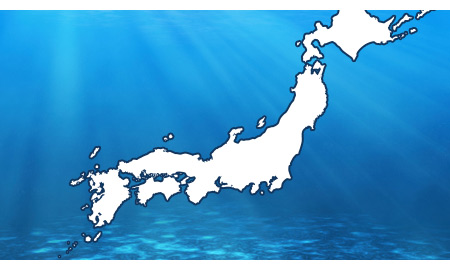 The news in early March that a Japanese company had successfully extracted natural gas from methane hydrate deposits under the seabed offshore Japan was hailed as a breakthrough for the energy industry around the world.

There are large deposits of methane hydrate, or 'ice gas', in several locations around the planet. If they can be exploited, they could help many regions achieve the low gas prices currently seen in North America as a result of the shale gas boom.

Methane hydrate is a compound in which a large amount of methane is trapped within a crystal structure made up of water, so forming a solid that is similar to ice in its composition (although it looks like slush). For methane hydrate deposits to form the right conditions in terms of pressures and temperatures are required. These conditions are normally found in four kinds of environment:

There are some 40 trillion cubic feet of methane held in methane hydrate deposits under the sea in the eastern Nankai Trough, off the southern coast of the Japanese island of Honshu, according to JOGMEC. This is equivalent to around 11 years of the amount of liquefied natural gas that is currently imported into Japan.

JOGMEC has been working at the Daini Atsumi Knoll, off the coasts of the Atsumi and Shima Peninsula since February 2012. After acquiring pressurized core samples last summer, the company began an experimental flow test in March this year, successfully yielding gas from the methane hydrate deposits.

In order to achieve extraction, JOGMEC used specialized equipment to drill into and depressurize the methane hydrate causing the gas to separate. The gas was then piped to the surface.

JOGMEC hopes its experimental test will help it better understand dissociation behavior of methane hydrate under the seabed and the impact to the surrounding environment. A second offshore test is planned ahead of commercial production that could be achieved later this decade. However, a lot will depend upon whether the costs of extraction can be brought down to low enough levels to make commercial production viable.

While the Japanese government says that it is now planning a three-year study into how much ice gas it has within its territorial waters in the Japan Sea, a number of other countries have also been looking to exploit methane hydrate resources.

For example, last August, the U.S. Department of Energy (DOE) announced funding for 13 research projects across 11 U.S. states to help develop methane hydrate deposits as an energy source. At the time, U.S. Energy Secretary Dr. Steven Chu commented that although research on methane hydrates is still at an early stage, these research efforts could one day yield the same kind of benefits achieved by the shale gas boom after the country invested in researching shale gas in the 1970s and 80s.

Meanwhile, China is also investing millions of dollars into the study of methane hydrates.

The energy content of methane occurring in hydrate form is immense and could exceed the combined energy content of all other known fossil fuels (one cubic foot of methane hydrate contains approximately 160 cubic feet of natural gas), according to the U.S. DOE. But there is still the question of how big future production volumes could be. This is what the current project by JOGMEC should go some way towards determining, as will certain projects that the DOE is funding.

One of the projects that the DOE is helping to fund is being carried out Georgia Tech Research Corporation. This organization was granted $626,000 for a project that aims to understand the behavior of gas hydrates hosted in fine-grained sediments such as clay or silt, including how to evaluate extraction methods that could be used to produce gas from such sediments.

The U.S. government's strong research interest in methane hydrates is not surprising given that the U.S. Geological Survey (USGS) has identified several accumulations of methane hydrates offshore United States and Central America. Meanwhile, in the North Slope of Alaska the USGS estimates a mean resource of some 85 trillion cubic feet of natural gas held within methane hydrate deposits.

As well as offshore Japan and the Russian Far East, accumulations of methane hydrates have also been discovered in the Black Sea and off the coast of West Africa. But there are plenty of other locations around the world where methane hydrates are thought likely to occur.