Musings: China And The Importance Of The South China Sea 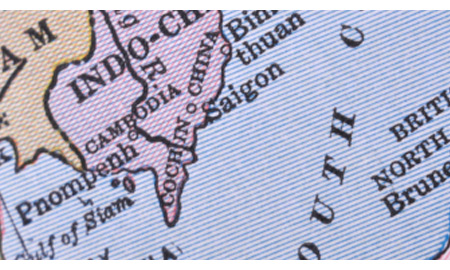 The world has been riveted with the drama unfolding in the northern Pacific region as North Korea rattles its rockets and threatens war. One of the key players in this drama is China, a long-time supporter of North Korea. China has many conflicting geopolitical objectives, some of which are driven by the nation's need for increased energy supplies and raw minerals to power its economy in order to support its 1.2 billion in population.

China realizes it has emerged as a super power, and with that status it must demonstrate its power meaning it must establish dominance in the Pacific region.

Economically, militarily and politically, China has power throughout Asia from Vietnam to North Korea. What it hasn't had until recently is a significant naval presence. That situation is changing as China has built it first aircraft carrier and other sophisticated naval vessels including submarines. At the same time, China has reiterated its long-standing claim over the South China Sea, and with it the country's claim over whatever mineral and energy resources might be present.

China's claim over most of the South China Sea is based on its 1946 undefined claim – the nine dashes on a map.

The South China Sea is a large and strategic body of water. Exhibit 3 shows the numerous agreed boundaries negotiated between South China Sea neighboring countries since the late 1950s. It also shows the declared limits claimed by countries beginning with the 1946 Chinese claim. While there are many geopolitical implications due to these conflicting declarations, our purpose is to examine the significance of the South China Sea to China from an energy perspective.

The initial consideration is the location of possible oil and gas deposits. The Energy Information Administration (EIA), coupled with the resources of other research firms, has put together a map of the possible oil and gas deposits in the South China Sea. A number of these areas have been explored and continue to be explored and developed. Those include deposits offshore Vietnam, China, Brunei and Malaysia. If one re-examines the nine dashes encompassing the area of the South China Sea claimed by China (Exhibit 3, page 5), some resources claimed by Vietnam, Brunei and Malaysia could be claimed by China setting up tension amongst the countries. (See Exhibit 4.)

However, as the EIA shows, these resources are not truly significant in the global scheme of resource deposits. According to the EIA, the undiscovered oil resources of the South China Sea, excluding the Gulf of Thailand, Indonesia's Java, Borneo and Sumatra basins, and the Solu Sea, are slightly greater than those of Europe at roughly 10 billion barrels of oil. The South China Sea ranks seventh in all geographic regions and along with Europe represents a minor increment of the world's undiscovered oil resources.

The South China Sea ranks in the same position relative to Europe and the other regions of the world with respect to undiscovered natural gas resources.

The South China Sea has about a quarter of the estimated undiscovered natural gas of North America, a mature conventional gas resource region, but with a rapidly growing unconventional shale gas potential. At the end of the day, all the proved oil and gas reserves plus all the possible undiscovered ones still leaves the region as a bit player in the world's energy business.

If the oil and gas resource potential of the South China Sea is so limited, why does China find it must demonstrate power in the region? The need to show that as an emerging super-power and with the second largest economy on the planet, China must show strength. At the same time, China is also a significant importer of energy and raw materials, all of which are extremely important for the health of the country, its people and its government. China is targeted to surpass six million barrels per day (mmb/d) of crude oil imports during the second half of 2013. At the same time, the United States, the globe's largest oil importer, will be bringing in less than 6 mmb/d of crude sometime early in 2014, dropping the country into second place behind China on the list of the world's largest oil importers.

For China that is rapidly becoming the world's largest oil importer, protecting that flow of oil becomes a prime consideration of the government. Note in Exhibit 7 (page 8) that nearly 13 mmb/d of oil, almost 15% of total world oil consumption, flows into the Strait of Malacca near Singapore, one of the world's well-established shipping chokepoints. About 11 mmb/d of that oil flow goes beyond Singapore and Thailand and toward Hong Kong, China, South Korea and Japan, making protecting these shipping lanes imperative for the health of those economies.

An equally important energy trade is the flow of liquefied natural gas (LNG), much of which comes from Australia and Southeast Asia, but with a growing volume coming from the Middle East. LNG is likely to become an important fuel for China who has relied upon coal-fired electricity to power its economy with the attendant problem of serious pollution problems in its major cities. In 2011, China imported 12 million metric tons (mts) of LNG, equivalent to 1.5 billion cubic feet per day (Bcf/d). China was projected to import 16 million mts in 2012, or roughly 2.0 Bcf/d, and to reach Japan's 56.6 million mts of LNG consumed in 2012 by 2020. To handle that increased volume, China is planning to construct 15 new LNG receiving terminals to go along with the five already in operation. Given the North American shale revolution, the potential for LNG exports from Canada and the United States has become a real possibility. The opening of a widened Panama Canal by 2015 means LNG carriers coming out of the Gulf of Mexico will have a shorter shipping route to Asia then if they were forced to circle South America in order to reach the Pacific market. Two other developing natural gas industry trends will also impact the global flow of LNG. One is the development of the recent huge gas discoveries in East Africa. The Asian region is the target market for the natural gas recently found offshore Mozambique and Tanzania, but the energy industry is also excited about exploration opportunities in Madagascar, Kenya and Uganda, any and all of which would likely flow to Asia.

Longer term there is also the wildcard of China's gas shale potential. Estimates are that China has the world's largest shale gas resources. If it successfully develops these resources, China could rapidly shift from being an LNG importer to becoming an LNG exporter. Both situations put a premium on China being able to insure the safe passage of LNG tankers, either to terminals in China to offload cargos or to load cargos destined for world markets.

As President Barack Obama has indicated his foreign policy initiatives have pivoted toward Asia, the geopolitical tensions in the region will be elevated, not just because of what North Korea is doing. The United States has entered into upgraded trading relationships with our Asian friends, so we must demonstrate our willingness to stand by them when and if they have to confront China over its South China Sea territorial claims. At the same time, the U.S. Navy must demonstrate our strength in the region to prevent the appearance of the U.S. being perceived as a "paper tiger" by other nations in the world. Defense Department budget cuts coupled with a shrinking and aging fleet of naval vessels is hurting our ability to fulfill the many and varied missions assigned to the Navy. Any change in that course will take considerable time.

While oil and gas developments in the South China Sea will be of interest to the petroleum industry and investment community, the real story of this region is its strategic placement within the flow of energy globally and its importance in the geopolitical struggle between the two leading super-powers – the U.S. and China. With a better understanding of the true importance of the South China Sea to China's economic and political stature, one should be better able to understand the significance of actions and events likely to unfold over the next few years.

jan solis  |  April 23, 2013
greed dictates human reason,so be it. but remember you are not the only country that needs natural resources to fuel your economy. disregarding neighbor maritime rights are solemn that should not be touched upon otherwise it will turn into destruction to all mankind and nothing will be left but waste and ruin. if you love your country, we also love our country. let there be peace on earth and not sowing terror among your neighbors. your country were shaped by you but also your neighbors. please respect ones sovereignty to have a happy country and a happy life on earth.
John Morris  |  April 18, 2013
From my own experience, based on attending a mandarin presentation in Haikow, Hainan in 1984 by an extremely jingoistic PLA army colonel, China claims all of the South China sea. The basis of the claim is based on "face". China thinks itself superior to everyone else on the planet - all should knock their heads before the feet of China. It was ever thus. The existence of natural resources to the Chinese is a side issue, albeit other claimants simplistically regard the oil and resource issue as the prime bone of contention. Hear this, Tremble and Obey.