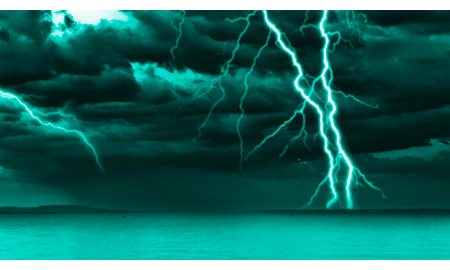 In 2009, the National Lightning Safety Institute reported that lightning damage and related losses exceeded $5 billion. According to reports from Lloyds and the Insurance Information Institute, lightning-related losses rose 15 percent from 2009 to 2010. 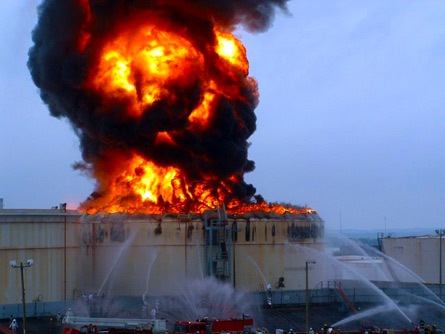 "Lightning is beautiful, dangerous and more complex than we think," Saunders commented.

This process can include cloud to ground – the most studied and understood form of lightning – as well as intracloud and cloud to cloud.

For over two centuries, the lightning rod has served as the primary means of protecting assets from lightning after Benjamin Franklin invented it as a solution to preventing house fires in the 18th century. Lightning became more of a threat as the heights of buildings rose. However, attracting lightning is not something that owners of multi-billion dollar oil and gas facilities want. Instead, LEC uses charge transfer technology to prevent direct strikes by lightning to protect energy assets, whose electronic components can be knocked out by lightning in the blink of an eye, said Saunders.

Former Rockwall and NASA engineer Roy B. Carpenter founded the predecessor company to LEC over 40 years ago to study and apply engineering principles to lightning strike problems and design a lightning strike prevention system based on physics. This system would also take into account the scientific study of point-discharge rather than observation or guesswork, which had guided the lightning protection community for over two centuries.

Point discharge is the process in which a sharp point immersed in an electrostatic field transfers charge from the ionizer into the air. Ionized air molecules form a mixture of charged and uncharged molecules known as space charge, which forms a shield between the storm cell and the site. The difference in the electrical power between the protected site and the storm clouds is reduced, delaying the formation of an upward streamer from the protected site and preventing direct strikes.

Carpenter, who worked as chief engineer for NASA's Apollo Moon Landing Missions and the Space Shuttle design engineering teams, decided to pursue technology to protect against lightning strikes because of the large and frequent problems he had seen with lightning strikes at Cape Canaveral.

The result of this research is the charge transfer system (CTS) – which LEC calls the Dissipation Array System (DAS) – which is intended to prevent a lightning strike from occurring within a protected zone or area. The system prevents lightning strikes by collecting the induced charge developed by thunderstorm clouds from a protected area of the earth and transfers this charge through the ionizer into the surrounding air.

LEC's solution utilizes basic principles of physics in which a zone of protection is created from the highest point of a facility down to the earth. For example, a facility that stands 50 feet in height would have a protection zone 200 feet wide around the facility, Saunders commented.

Protection against lightning involves three parts – direct strike protection, surge protection and grounding. LEC prides itself on being able to provide consulting, design and implementation services for lightning protection, said Saunders. The company offers custom solutions, based on a clients' need and risk tolerance, as lightning protection involves more than a cookie cutter approach. Maximum ionization is achieved through point spacing, length and the number and geometry of points.

The charges transferred to the air can act in one of two modes – collection, which establishes a preferred conductive path for the lightning leader, and prevention mode, which reduces the electric field intensity to the level that delays the formation of an upward streamer from the protected area. 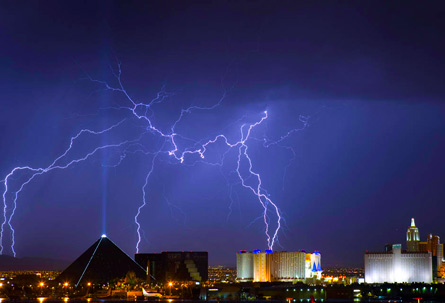 Lightning strikes at the Luxor and Excalibur in Las Vegas, September 2011

The company's technology has been used to protect assets in the upstream and downstream oil and gas industry, as well as across multiple industries – petrochemical, power generation, biochemical, chemical manufacturing, information technologies, nuclear energy, mining, utilities, and manufacturing. LEC has provided services for onshore and offshore facilities in Nigeria, Thailand, Singapore, southern Africa and Australia.

The company is working on cracking the offshore market and changing its status from a "best-kept secret" in the U.S. offshore oil and gas industry. The company's business has grown over the past several years, but business outside the United States has represented the lion's share of LEC's business growth. From 2010 to 2012, LEC experienced 183 percent export growth, and increased the number of countries in which it is doing business to 70.

The company has seen its business grow in countries such as Qatar. While lightning strikes are not as much of an issue in the Middle East, companies in Qatar are investing in technology to protect against lightning, not only meeting standards but exceeding them. In Qatar, the challenge for LEC has been installing the equipment on offshore facilities without disturbing the patterns of helicopter flights.

Offshore rigs and platforms are thought of as "grounded" to the ocean. However, the environment and even the facility's design could lead to a compromise in bonding with rust and oil deposits that impeded the energy's path to the ground. This leaves the advanced electrical and electronic systems and personnel vulnerable to damage not only on from direct strikes but surges as well.

However, lightning does present an issue for the Gulf of Mexico, and the growing emphasis on safety following the 2010 Macondo incident has created a new openness in the industry to new ideas, Saunders noted. To address the risk of lightning to offshore oil and gas facilities, LEC has been working with drilling rig contractor Transocean Ltd., with whom LEC connected through Transocean's operations in Aberdeen. Chevron Corp., Exxon Mobil Corp. and BP plc have also turned to LEC to address the issue.

Last year, solutions for nearly a dozen companies' offshore platforms and rigs were produced following vulnerability studies conducted by LEC that were based on International Electrotechnical Commission and National Fire Protection Association guidelines and standards. Many of these solutions included LEC's DAS system, according to a February 2013 report by LEC.

From the standpoint of electronics, the secondary effects of lightning -- earth current transients and atmospheric transients, ground potential rise and electromagnetic pulse -- are a greater problem than the direct lightning strike. And in some cases, the damage caused by lightning may not show up immediately after a storm, but some time later, Saunders commented.

"With every upgrade in technology, sensitive systems like dynamic positioning, drilling instrumentation and control and other rig management systems essential to staying online are becoming more vulnerable," LEC said in a February 2013 report.

Calculating the mean-time-between-failure for sensitive systems is more difficult than determining the dollars lost through obvious damage and downtime. Costs could range between $20,000 and $60,000 per hour or more when a system is down; these costs do not include the replacement costs of the equipment affected.

Protecting assets from lightning strikes has become even more critical in a weak economy, when companies may have mothballed some plants and are not operating at full efficiency. Operating with fewer assets means the protection of having redundant facilities goes away, Saunders commented, leaving assets that are operating more vulnerable to damage from lightning strikes. In the case of Transocean, the company's sale of its jackup fleet and shift towards ultra-deepwater drilling means the company's need to protect its ultra-deepwater drilling fleet is greater. 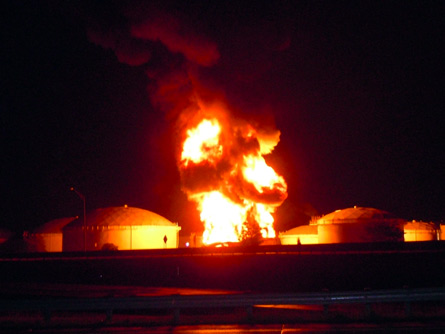 LEC's confidence in its product prompted the company to extend a full no-strike warranty to each and every client who buys a system and recertifies it each year. The charge transfer system's reliability stands at 99.87 percent, with more than 60,000 systems of data on approximately 3,500 systems. Additionally, Hitachi is in the process of testing LEC's technology and effectiveness at a facility in Singapore.

Saunders cites the case of the Browns Ferry Nuclear Power plant, the first nuclear power plant constructed by the Tennessee Valley Authority (TVA), as evidence that LEC's technology works. While the nuclear facility in 2006 helped TVA achieve a 99.99 percent operational reliability for the fifth year in a row, lightning strikes to the facility's off-gas stack were hampering reliability. As a result, no known lightning strikes to the off-gas stack have been reported in nearly a decade.

A comparison of data on lightning activity around the off-gas stack in three years before and after the implementation of the DAS system – including the number and location within 1,640 feet (500 meters), 3, 6and 10 mile radius circles around the off-gas stack. The review found the implementation of DAS reduced by 80 percent the lightning strikes that occurred within 1,640 feet (500 meters) of the off-gas stack. The weighted data for strikes in the wider areas showed no change of statistical significance, though lightning frequency grew by nearly 63 percent in the 10 miles radius around the stack in the time after the DAS was implemented.

Saunders believes the results indicate the company "knows what it is doing".

William  |  March 29, 2013
Lightning, has always fascinated me. Great article. I am wondering,though how this effects weather,and if it would cause more or less rain fall in surrounding areas of these systems ? I live in Colorado, and can see where this would be a great asset to the oil Co.`s, but then what effect does it have on say the farmer down stream? There were hail cannons placed on farms west of me, east of front range,and those worked also, but at a cost to the farmers where I live.No real proof, but when they were in use we experienced, less rain fall .