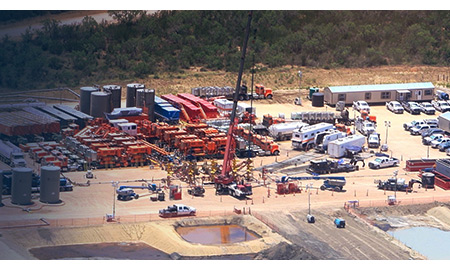 Custom turbine technology has allowed Green Field Energy Services to offer hydraulic fracturing pumps that can run solely and cost-effectively on natural gas, including liquefied natural gas (LNG), compressed natural gas (CNG), and field gas, along with offering oil and gas producers flexibility to use diesel and liquid fuels such as kerosene.

The Lafayette, La.-based company late last year commissioned the first multi-fuel hydraulic fracturing pump that could either run on diesel or natural gas after blood, sweat, tears and attempts with several prototypes, said Rick Fontova, president of Green Field Energy Services, in an interview with Rigzone.

While diesel has been widely used in the oil field service industry for a number of years, the abundance of low-cost, cleaner-burning U.S. gas supplies due to shale exploration has sparked interest among some oil and gas companies to using more natural gas in their operations. This emerging trend prompted interest by Green Field in moving towards a pump that could burn only natural gas on a cost-effective basis, Fontova commented.

Green Field has worked with companies such as Apache Corp. who are seeking to fuel their exploration efforts with natural gas. Last month, Rigzone reported that Green Field has run a hydraulic fracturing pump for Apache at Apache's Granite Wash fields using 100 percent field gas.

MTT produces turbine systems for unique applications, including what McIntyre calls "big boy toys" – motorcycles and high-performance boats. The company – whose customer list has included Jay Leno –has also worked with the U.S. military, including a recent agreement with the U.S. Air Force to develop a high-pulse weapon. The company's turbines were also used to pump water out of New Orleans following Hurricane Katrina in 2005.

The prototype caught the attention of Mike Moreno, now chairman and CEO of Green Field. Moreno had headed up a group who acquired Hub City Industries (HCI) in May 2011 and changed the company's name to Green Field. Founded in 1969, HCI initially focused on pumping stimulation, but expanded its services to offer hydraulic fracturing, cementing, acidizing, coil tubing, gravel packing and nitrogen services.

In November 2011, Moreno raised $250 million in a high-yield bond offering; once the capital was raised, Green Field came into existence, as did TPT. At that point, production of the turbine equipment started ramping up, with 30,000 horsepower produced in the month the multi-fuel pump was rolled out. Currently, Green Field has 160,000 horsepower and five hydraulic fracturing spreads, with plans to build two more spreads in the first quarter of this year.

In May 2012, the company began working under a long-term contract with Royal Dutch Shell plc to offer pressure pumping services. The contract marked the company's official move beyond the manufacturing phase for its multi-fuel hydraulic fracturing pump to the operational phase. The agreement with Shell called for two frack spreads to be provided with the option for additional spreads.

While Green Field's multi-fuel pump utilizes a conventional hydraulic fracturing pump widely available throughout the industry, what makes Green Field's pump unique is the turbine placed on top and the proprietary reduction gear box, or rosetta stone, that lets the company match the turbine to a pump.

The result is a frack stack pack that is powerful but light and compact enough for two to fit onto a typical 45-foot long trailer. This technology allows Green Field to double the horsepower available at a site with the same footprint, McIntyre noted. When operating on No. 2 diesel fuel, Green Field's clean turbine pumping technology emits 87 percent fewer emissions than those released by a diesel engine. The turbines also weigh significantly less. Diesel engines can weigh anywhere between 18,000 to 25,000 pounds; Green Field's turbines weigh 1,500 pounds.

The oil and gas industry has utilized reciprocating engines to power its equipment for years, despite the known limitations of diesel engines. However, diesel engines have lower pump rates, and are oversized, heavy and face reliability issues, said Fontova.

The ability of using a frac pump to run on gas-powered turbine offers a critical advantage over diesel engine. Starting in 2015, diesel engine manufacturers will be required by the U.S. Environmental Protection Agency (EPA) to produce engines that meet lower emissions standards. Green Field's engines already meet the new standards, coming in at 60 percent below the Tier IV standards on liquid fuel. When gas is used, the amount of emissions is reduced by another 15 to 20 percent.

Other pumps are available on the market which can run on bifuel, a mix of natural gas and diesel that has received a lot of press lately, but lose power when the run on solely on gas. When Green Field's turbines run on natural gas, the fuel economy and emissions are even better than with diesel, said McIntyre. Green Field's clean turbine pumping technology allows the company to reduce emissions by 87 percent and offer the highest power density on the market.

A turbine engine is naturally capable of running on gas, said Fontova. The difficult part for Green Field was to get the turbines to run on diesel, which remains the most abundant fuel in the oil and gas services industry.

"The infrastructure was not sufficiently in place when we were launching this," Fontova noted. "We didn't want fuel to be a reason that customers couldn't equipment."

Even with 100 percent diesel, Green Field's turbines already meet the EPA standards because of how the turbine operates.

"It's much more clean and efficient and offers maximum flexibility for its customers," Fontova commented. "So that way, we're never in a situation where we're ever able to access a fuel."

By using after-market turbines that had been utilized for Chinook helicopters, the company is able to bring down the cost of the turbines to build equipment more competitive in price with diesel.

"If you had to buy these turbines new it would be cost-prohibitive compared to diesel engines," said Fontova.

One challenge Green Field faced in its development of the multi-fuel pump was a gear box that could handle the tremendous torque that a turbine produces and creating a control package similar to a conventional diesel operation that would allow operators to run the turbines.

"Frack operators were not intended to be pilots, so we had to create a user friendly system to allow conventional frack operators to transition to new technology," said McIntyre.

However, one of the biggest hurdles is proving to the oil and gas industry that the turbines would work, McIntyre noted.

Oil field service companies such as Halliburton Co. and Schlumberger Ltd. tried using a turbine in a frac pump in the 1960s and early 1970s, said McIntyre, who knew about the turbine experiments through his father, a former Halliburton employee.

In addition to fueling hydraulic fracturing pumps solely on gas, the company has secured commitments with two customers to test power generation of oil and gas equipment using field gas.

Green Field's customer commitments for pilot programs were announced in conjunction with the recent agreement the company inked with GE Oil & Gas. In early January, the company signed a global supplier agreement with GE to supply power generation solutions to the oil and gas industry.

Through the agreement, GE will provide technology and equipment, including electric submerged pumps (ESP) used in artificial lift systems in oil and fluids production, modular CNG in a box compressed natural gas systems and LNG production systems and more.

Green Field will use these technologies in conjunction with its own fueling technologies, which can significantly reduce a site's environmental footprint and increase efficiency by replacing diesel fuel for power generation.

The two companies will also further investigate ways of making their technologies even more efficient when deployed together, Green Field said in a Jan. 7 announcement.

The generators are used to power ESPs, which are used to produce oil and gas. The ability to use field gas – like Apache did in the Granite Wash – or have access to sources of electricity at oil and gas fields in areas with no power transmission lines will be the next challenge that exploration and production companies will have to solve.

"The world needs cheap electricity, and we certainly feel we have a solution," McIntyre commented.