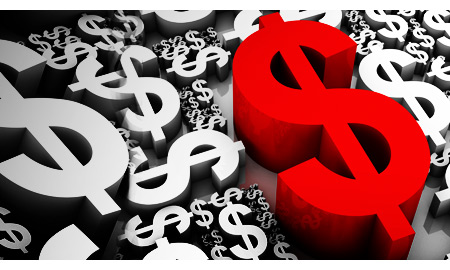 Operators are using a new downhole drilling slurry additive that they do not want their competitors knowing about it. It is their secret weapon for overcoming high torque issues and getting weight to bit in some of the harshest drilling environments under extreme heat, pressure and friction. ProOnes' Bio-stable Downhole Drilling Fluid additive has helped save its customers over $700,000 per well per 30+ day drilling period, Sunset Industries said. 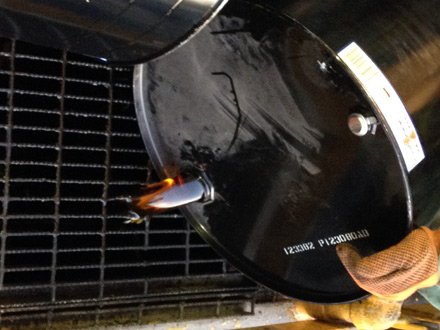 ProOne being added to the slug pit

In one specific case, Marcus Johnson - a mud engineer with Excelsior Fluid Services - was on the job in North Dakota drilling a deep well in the Bakken when he and his crew encountered a severely deviated wellbore in a 10,000 foot lateral that did not go according to plan. The torque was 12,922 feet pounds and the rate of penetration was 88.1 feet per hour. Its sister rig encountered similar issues. The operator told Johnson and his crew to try ProOne and the sister rig to try a different downhole fluid additive.

"When I got word that we were running this lube, I immediately told the operator that in my experience lubes do not work in oil-based mud. In water-based mud it works great with varying degrees of success. Nonetheless my instructions were to run it. So we did and I was thoroughly impressed," Johnson said.

According to Johnson, he and his crew added ProOne at 5 percent to a 100 barrel slug pit, which reduced the torque to 9,233 and increased ROP to 155.6. This allowed the crew to complete the remaining 4,000 feet of an 11,000 foot lateral using the same drill bit and same mud motor.

The operator has been using this fluid for the last 18 months with the same success.

"The first few times we were experimenting with ProOne," Johnson said. "We don't experiment with it any more. Now we have a full volume of oil mud that we reserve for the lateral and it has the ProOne in it." 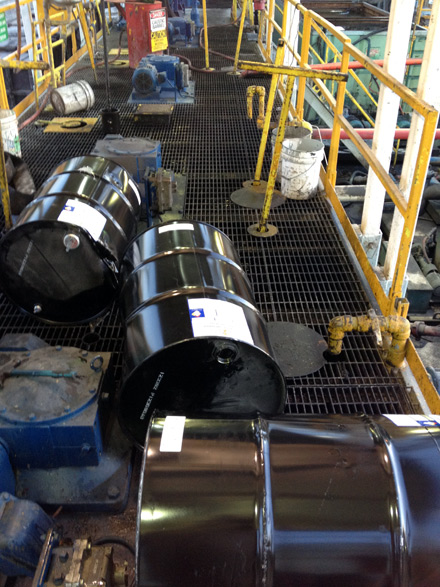 Used drums on a Louisiana rig

"The downhole slurry additive is a "one-size-fits- all fluid. It is extremely versatile, and has worked in every field we've tried so far. It works in oil-based, water-based or brine, in all resource plays and wellbores," according to Mike Long, CEO of Sunset Industries, distributor for ProOne.

The additive is designed to reduce torque and increase rate of penetration, which operators are reporting to save days of projected drilling time.

"ProOne also drops the temperature of the bit by 25 degrees and more. I've had a 20 year directional driller say he's never seen anything like it," Long said. "It gives operators a competitive advantage when using it."

The technology was first used successfully in 2007, but first tested for downhole drilling in the Bakken in late 2010. Since then it has been used all over the United States including California, Colorado, Wyoming, North Dakota, Montana, Oklahoma, Texas and Louisiana in 500+ holes. Though limited to onshore plays thus far, "the product has recently passed the toxicity test and received Ultimate Biodegradability certification as well as the LC-50 California Department of Fish and Game test, and the Mysidopsis Bahia Acute test both with 100 percent survival. So we've started talking to offshore drilling companies and hope to get the product offshore soon," Long said.

According to Long, ProOne Downhole Drilling Fluid focuses around ProOne's XPL+ technology, which stands for Xtreme Pressure Lubricants. The '+' is for the positively charged molecule structure that brings additional film strength of protection by way of reversing the polarization of the molecule structure of base lubricants. This positively charged technology reduces the S.E.M.F. (Static- Electro-Magnetic-Field), which in turn reduces electrolysis. When the slurry is mixed at 3 to 5 percent solution rate from the concentrate, this provides the ability to surround the granular structure with lubrication giving exceptional performance.

"ProOne's drilling additive can provide a reduction in friction up to and beyond 74 percent and also will increase the film strength of the existing drill mud in upwards of 175,000 psi," Long said.

By using a strong positive Ionic charged lubricant, not only to the drill bit but to drill pipe and casing, PODHDF aids in wear and friction reduction. This not only provides wear protection for drilling equipment, but also reduces drilling torque and drag, Long explained.
ProOne Downhole Drilling Fluid also attacks heat at the source preventing over 30 percent of heat build-up from occurring at point of contact of drilling bits and drill strings to casing walls; further reducing costly wear. Through the bonding of the lubricant to metal, a surface layer is created that protects the metal at extreme loads and temperatures and also prevents the penetration of foreign material such as dirt, rocks, water and salts.

"The product emulsifies in all water-based drilling fluids and stays emulsified for a much longer period of time over standard industry lubricants," Long said. "It will also reduce corrosion and electrolysis by as much as 94 percent by creating a virtually impenetrable boundary layer of lubricant molecules on all metal surfaces. Pro One's low mix ratios of between 3 and 5 percent by volume of drilling fluids is a cost effective solution to friction reduction, which leads to drilling cost reductions and overall positive project economics."

This performance is referred to as a metal treatment but actually goes beyond that description, Long explained. Because of its reversed polarization, it actually protects non-ferrous type materials to cover several critical moving parts within the downhole drilling equipment. By reducing the coefficient of friction and heat, this minimizes the acidic oxidation process that sets up within lubrication that causes premature part wear and downtime.

The ProOne Downhole Drilling Fluid lubrication surrounds the calcium that builds up and helps neutralize the acidic levels, keeping the PH balance neutral helping to avoid oxidation, corrosion build up and electrolysis, while all the time protecting pumping applications, seals and machinery parts, thus extending the life of equipment and dramatically reducing downtime, according to Long.

ProOne Downhole Drilling Fluid is an aqueous based drilling fluid, Long explained, which can significantly raise the boiling point of the water-based lubricant when mixed with the drilling mud at 5 percent in slug pits and 3 percent in the main pit.

"By reducing the friction, heat and raising the boiling point, this will dramatically reduce the chances of hydro-locking the mud, which is when the moisture turns to steam and rises away from the drill bit, which is where the moisture and/or drilling fluid is needed, and typical lubricants fail to bring lubricity to these high impact areas."

In turn, more top load performance is increased to the drilling components, prematurely wearing out mud motors and drill bits. In these cases the ProOne Downhole Drilling Fluid can at least double the life of the drill bit and extend the operating time of the mud motors, which can result in saving millions of dollars per hole when the drill bit cost and mud motor costs of downtime and labor is taken into account, Long explained.

ProOne Downhole Drilling Fluid is a non-hazardous product that will allow for an easier disposal and help with health issues that other standard lubricants do not offer, Long explained.

"What this means is that Pro One's Drilling additive is not only safer for the environment as well as the drilling crew using the product. In the past, #2 diesel fuel has been used as an emulsifier, along with other non-environmentally friendly lubricants, which have disposability problems that are costly for operators. PODHDF represents a significant costs savings in this area."

According to Long, with extended applications in directional/horizontal drilling, this form of drilling puts loads on drilling equipment for extended periods of time that can reach far beyond normal vertical drilling. These are the severe loads and applications that require reductions of coefficient of friction to extend performance to downhole drilling components, such as:

"These performance benefits are long lasting by using this polarized environmentally safe technology," Long said, "extending and protecting all drilling components that will be built into the drilling equipment to perform over and over in this very extreme environment, giving extended reliability and greatly reduced operating and maintenance costs."

Dr. Milap  |  July 25, 2013
Looks magical and miraculous, but miracles do not happen in real life. Product bulletin please and complete details of how it works. Does it reduce interfacial-tension? If yes, what mechanism and is this a permanent feature after one time treatment? Can it be demonstrated in laboratory?
Bob Cooper  |  March 27, 2013
Everything stated has proven to be the absolute truth but Im shocked that their is no mention of the other Pro One products that eliminate the black smoke from the platforms diesels. Im now a fan after seeing what that product did for my boats old diesel engines. I run it in my automobiles as it seems to remove the carbon deposits because I smog test green.
Randy Donald  |  October 19, 2012
We used ProOne as a lube pill in the curve section from the KOP (Kick-off point) to the EOC (end of the curve) before running csg. I thought it was a waste of money since we had OBM in the hole. But the csg went to bottom without the usual high torgue & drag we normally see.