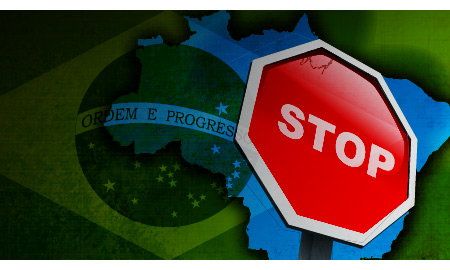 Brazil's National Petroleum Agency, or ANP, appealed the ban because it believes enforcing the injunction and immediately halting the two companies' operations could cause serious safety problems and great economic harm, according to the ruling.

The decision returns Chevron and Transocean's broader appeal of the ban to a regional court in Rio de Janeiro, where the case is ongoing.

A Brazilian court banned the two companies from operating in the country in late July because of their roles in an offshore oil spill last year.

"This is very disappointing, as we believe the injunction order is unwarranted and is flawed legally and procedurally," Transocean Chief Executive Steven Newman told analysts on a conference call Wednesday morning. "Let me assure you that the technical merits of our case are strong, and we are pursuing the many avenues available to us to appeal the preliminary injunction."

Chevron said in a statement that it is "disappointed" in the court's decision. Chevron "will seek all legal means at our disposal to overturn the injunction and demonstrate the company acted diligently and appropriately at all times," the statement said.

The ANP had sanctioned Chevron and said it would fine the company for any wrongdoing relating to the spill, but has cleared Transocean.

Despite the incident, ANP officials have said they would meet with Chevron to discuss restarting output at the Frade field, which the company voluntarily shuttered in March.

Mr. Newman said Wednesday the court hasn't yet served the company with the injunction and that all of Transocean's rigs in Brazil are still under contract and generating revenue--the company has 10 rigs in Brazil.

Under the terms of the injunction, Transocean would have to cease activity within 30 days from the date of service.

Guy Cantwell, a spokesman for Transocean, said despite the recent court decision, there are still avenues for the company to contest the injunction.

"We will use all available resources to prevent a shutdown, even temporarily, of Transocean's operations in Brazil," he said in a statement. He said Transocean's crews and equipment functioned correctly and weren't to blame for the spill.

Mr. Newman said that if the injunction does go into effect without a successful appeal or intervention, he didn't think it would mean the end of Transocean's contracts in Brazil, though its rigs would stop bringing in money.

"I think the worst-case scenario is that we go to a zero rate environment and the customers don't terminate the contracts," he said.

But that scenario still "doesn't look pretty" for Transocean, which earns about 11% of its revenue in Brazil and would continue to incur costs keeping its rigs ready to work at a moment's notice, Mr. Newman said. Transocean had $2.575 billion in revenue in the second quarter.

The ANP also made the appeal as part of a turf war with the justices who issued the ban, with the ANP claiming that its position as the oil industry regulator gives it sole jurisdiction over deciding whether or not an oil company can operate in Brazil.

State-run oil giant Petroleo Brasileiro SA, or Petrobras, has contracts with Transocean rigs and has continued to support the company, Mr. Newman said. Mr. Newman said the company had received "unprecedented" support from its customers.

John Loftus  |  September 13, 2012
Given the opportunity I am confident I could reverse the decision made by the Brazilian court regarding Chevron and Transocean operating in their country. I am passionate about safety, can relate to core values and believe that I can support any companies commitment to delivering Safe, Effective and Trouble-Free Operations. As a Lead Safety Instructor/Assessor I am committed to conducting training to the highest degree that promotes a positive, constructive and consistent culture, with standards and methods of work that support this culture. As a nation safety is paramount in every aspect of industry and we must to strive to set greater goals for the sake of our employees, our clients, the environment, and the society in which we operate. Regards John Loftus
RELATED COMPANIES
Company: Chevron Corporation more info
Company: Transocean Ltd. more info