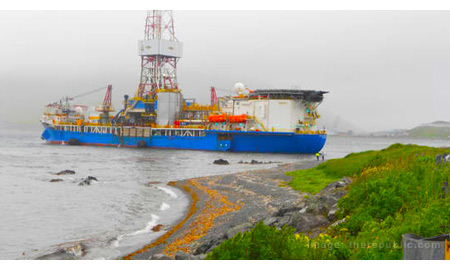 A drilling ship leased by Royal Dutch Shell Plc to begin exploring for offshore oil in the Arctic this summer drifted off its moorings this weekend while anchored off the Alaskan coast and narrowly missed the shore.

Shell said a remotely operated vehicle sent to inspect the drilling ship found no sign of damage or evidence it ran aground, but the incident adds to the challenge of launching on time the company's controversial plan to drill in Alaska--one of the most expensive exploration bets it's ever undertaken.

Shell's efforts are being closely watched by authorities and faces stiff opposition from environmentalists; the U.S. Coast Guard has yet to approve an oil response vessel that's critical to the effort, even as the clock ticks on the short summer window the company has to start drilling in the Arctic's harsh environment.

"They don't want to start on the wrong foot," said Fadel Gheit, an analyst with Oppenheimer & Co. "All eyes are now on Alaska."

On Saturday, the drillship Noble Discoverer, owned by Noble Corp., drifted toward land while anchored off Dutch Harbor, Alaska. A Shell support vessel quickly towed the drillship back to its original anchoring point, the company said.

Shell said that a dive team will conduct an inspection to confirm no damage took place, most likely on Monday.

The company said that while it is conducting an internal probe to find out why the vessel went adrift, the company is "pleased with the speed and effectiveness" of its response. "Any lessons from this incident will be applied to future operations, here and elsewhere."

The intensity of scrutiny on offshore drilling, especially in environmentally sensitive Alaska, has increased since a 2010 blast destroyed a drilling rig leased by BP Plc in the U.S. Gulf of Mexico, killing 11 and unleashing the worst offshore oil spill in U.S. history.

It said, "Even a 'near miss' is unacceptable."

T. Verwey  |  July 19, 2012
CANMAR (Canadian Marine Drilling) did many wells in the artic both in Alaska Chukchie and beaufort seas and in Canadian side. Not once did we loose anchorage or have a spill condition. These wells are usually multi year projects due to the short drilling season. The water depth is not suitable for DP ships hence 8 point anchoring systems are used. Mor profesionalism on part of the marine and drilling crews is required to complete a safe well. and just because one is in an anchored condtion does not mean that marine watch is not needed and easy standown can be in place. It is not a jack-up.
Pat  |  July 18, 2012
Rick-its obvious you dont know anything about the ship, and you certainly didn't read everything about the ship or the incident. The ship was on an anchor, not on DP. And that ship is a single engine, and uses conventional mooring.
Clifford Ward  |  July 17, 2012
Alaska has very poor anchor handling ground, normally. This is a prime reason Dynamic Positioning came into being and why its used extensively on thousands of rigs/ships/service craft worldwide.
b seppa  |  July 17, 2012
Well: not a very good start boys, if your drilling program cant even have your drillship stay anchored. What gives you the right to even think you can successfully, complete a very complexed drilling operation. You are also going to be close to the Canaidan part of the Arctic to drill, what happens if YOU SCEW UP? Will YOU PAY FOR THE CLEANUP ON THE WHOLE ARCTIC OCEAN.
Phil Laudicina  |  July 17, 2012
This will keep getting delayed until after the election. It amazes me that in this era of advanced technology, things like this still happen. One has to wonder if there are individuals who do these things deliberately or if the oil companies are just that incompetent. Just remember, if Obama wins, this project gets killed along with a substantial portion of oil and gas exploration/production so he can push his failed green energy agenda.
Tony  |  July 17, 2012
Same thing happened in New Zealand with THIS rig last summer. It lost its anchors, drifted without power and nearly took out a couple of platforms. Shell should be ashamed of their record. They have a long way to go to meet their goal.
obaidur rahman  |  July 17, 2012
It is a total negligence and poor supervision of main crew. Drill ship should not be drifted as it has its own propulsion system. It is not a case of Jack Up Rigs. Capt-on and all other senior crew are responsible of this type of man mistake..There-is lack of communication, coordination prior to begin operation.
Rick Morgan  |  July 16, 2012
how does a drillship, which supposedly has an independent propulsion system, manage to drift off its moorings without sounding all kinds of alarms? Something sounds amiss.
Donald  |  July 16, 2012
If that is not considered around then i have no idea what is!!
mohammad  |  July 16, 2012
your information was really useful. thank you.
RELATED COMPANIES
Company: Shell more info