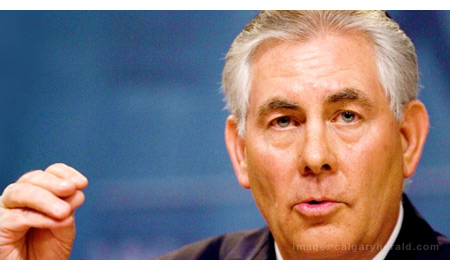 NEW YORK--Exxon Mobil Corp. (XOM) is making "no money" on U.S. natural gas due to low prices that have fallen below the cost of production, Exxon Chief Executive Rex Tillerson said Wednesday.

U.S. natural-gas prices--which fell below $2 a million British thermal units earlier this year to the lowest level in a decade--are not sustainable, as energy companies won't be able to continue drilling unless prices rise, Mr. Tillerson said during a breakfast event in New York.

"We are losing our shirts," said Mr. Tillerson.

The comments from Exxon's chief come amid a massive U.S. gas supply glut that has kept prices depressed and helped to reduce energy costs for many consumers and businesses. In recent months, demand for natural gas from utilities has surged as firms turn to gas instead of more expensive coal to supply electricity.

Exxon has been studying the possibility of exporting natural gas from the U.S. Gulf Coast and Canada as new shale drilling has unlocked natural-gas reserves to allow exports.

Exxon is following the trend of smaller companies, such as Cheniere Energy Inc. (LNG), which have already pursued the necessary permits to export gas from the U.S.

Additionally, Mr. Tillerson said that with public policy that encourages the industry, there are enough U.S. oil and gas reserves to provide the domestic economy with fuel through the rest of this century.

"To say the U.S. is energy poor is simply not accurate," he added.

Phil Eyler  |  July 04, 2012
What a farce! When the price of natural gas goes back up to $8, it will push the cost of production in the tar sands above the market price of oil. Is there no analyst anywhere who can see the chaos ahead? Energy arbitrage - converting one form of cheap energy into another form of expensive energy for a quick profit - is a fools game over the long term. Even ignoring the environmental aspects, tar sands production over the long term is not a viable proposition.
Dr Med Said BEGHOUL  |  June 29, 2012
The exploitation of shale gas will increase reserves and continue to drop more and more the gas price in the US and then in the world so as coal is still very present in the world energetic balance. There is nothing abnormal. What is astonishing is some OPEC countries are also preparing the shale gas revolution while their economic health is 90-100% depending gas income. Its very curious!
George Haley  |  June 29, 2012
Shut down production until you find a market. Exporting makes sense if we have an over supply.
Jack Nelson  |  June 29, 2012
If the US car manufacturers, and oil companies, and politicians, had let the US public use natural gas in vehicles many years ago, like so many other countries, then this would not be a problem. The environment would be better, and people would be saving money. The US would not be importing so much oil either.
Ernie Arrenegado  |  June 27, 2012
Good lets get the ball rolling, natural gas makes more sense then burning coal.
RELATED COMPANIES
Company: Cheniere Energy more info