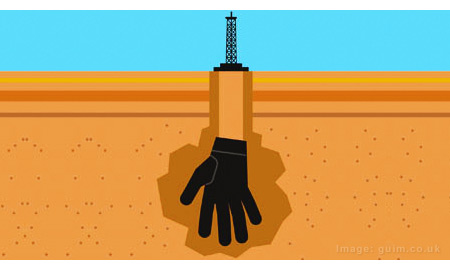 A "gas rush" is revitalizing the domestic petroleum exploration industry, and the legal ramifications could be felt for decades. Through hydraulic fracturing (fracking), petroleum companies access once cost prohibitive shale gas formations by creating fractures in underground rock formations, thereby facilitating oil or gas production by providing pathways for oil or gas to flow to the well. These pathways are commonly referred to as the "fractures." The legal consequences of fracking could impact more than half of the Lower 48 states.

The basic technique of fracking is not new. In fact, fracking has been used in wells since the late 1940s. The first commercial fracking job took place in 1949 in Velma, Oklahoma, however, sequestered layers of shale gas were inaccessible until 1985, when pioneers such as Mitchell Energy and Development Corporation combined fracking with a newer technology called directional, or horizontal drilling in the Austin Chalk. Directional drilling gave producers access to the shale gas because it allowed them to turn a downward- plodding drill bit as much as 90 degrees and continue drilling within the layer for thousands of additional feet. The positive results were soon transferred to the Barnett Shale in North Texas. To date, more than one million wells have been fractured.
The "hottest" shale plays are as follows:

Confirmed and/or prospective shale plays are also found in Alabama, California, Colorado, Illinois, Indiana, Kansas, Michigan, Mississippi, Missouri, Nebraska, Utah and Wyoming. Shale plays have been confirmed in countries around the world, but the US is the leader in shale gas exploration.

The new application of an old technology made it possible to profitably produce oil and gas from shale formations. Domestic and international companies quickly rushed to capitalize on the large reservoirs of shale gas. But unlike the preceding decades, where new oil and gas exploration had occurred offshore and in deepwater, oil and gas drilling started to occur in areas that were not accustomed to oil and gas activity. Overnight ranchers became millionaires as landmen leased large swaths of property to drill. The media started reporting about enormous domestic supplies of oil and gas that could be profitably produced from shale formations and politicians touted energy independence that could alleviate the country's demand for foreign reserves. But with the increased attention came increased scrutiny.

Environmental groups have criticized the industry for fracking. The chief concern is that fracking will contamination of drinking water. Movies such as "Gasland" and "Gasland 2" fueled the public's concerns that the drilling caused polluted water wells and flammable kitchen faucets. Additionally, the industry received criticism for the engineering process that involved high-rate, high-pressure injections of large volumes of water and some chemicals into a well to facilitate the fracking. The EPA and state regulatory bodies have become involved in the discussion and new regulations are likely to follow. In the meantime, some lawsuits have already been filed.

Plaintiffs have filed approximately forty shale-related lawsuits across the country. These lawsuits include: (1) tort lawsuits; (2) environmental lawsuits; or (3) industry lawsuits. As the shale boom accelerates more suits are anticipated.

Tort lawsuits have been brought by individuals and as class actions. Typically the claimants assert claims for trespass, nuisance, negligence and strict liability. Their complaints involve excessive noise, increased seismic activity, environmental contamination (air, soil and groundwater), diminution in property value, death of livestock/animals, mental anguish and emotional distress. The plaintiffs seek actual damages and, in some instances, injunctive relief. A few parties have even sought the establishment of a medical monitoring fund. The majority of these lawsuits have been filed in Texas, Pennsylvania and Louisiana. The first wave of lawsuits has established new law in the respective jurisdictions as the appellate courts weigh in with published opinions on issues that range from oil and gas lease forfeiture, consequences of forged contracts and contract formation.

Environmental organizations and some citizen groups are seeking to enforce environmental laws and regulations in an effort to protect the environment and the public from what the litigants perceive to be negative consequences of fracking. In some instances they are even seeking to restrict the use of hydraulic fracking until it is proven to be environmentally safe. A popular target among these litigants is federal and state regulatory bodies, such as the EPA, and federal statutes, such as the Clean Air Act.

The final category of lawsuits includes those brought by the industry against the government. Claimants have sought to challenge federal, state and local government actions that have impeded the industry's ability to drill.

The survey of current fracking lawsuits does not take into account the claims that will spin out of the new shale plays. In fact, the engineering and logistical side of the fracking process – not fracking itself – will lead to many more attendant claims.

Parties can act now to discourage litigation or better position themselves in the event they are named in a suit.

The proliferation of email and increased retention and archival capabilities means that emails never die. A potential defendant would be well served with a protocol in place that outlines to its employees what are acceptable electronic communications.

For those parties who could be exposed to claims regarding the fluids used during drilling, it is important that they minimize the public's suspicion that they are withholding information about the fluids. The best way to neutralize that misconception is to strictly comply with the state-mandated disclosure rules where applicable. It may even behoove them to voluntarily disclose the fluids' contents through the
companies' websites.

3. Be prepared for a fire-drill

A party must be ready to quickly assert its position when a claim is brought. The best way to do so is to track current litigation. Following the cases will provide the company a preview as to what claims it may be subject to, and it also allows them to evaluate defenses. It may also enable the company to insulate itself from suit by avoiding certain actions. Along those same lines, knowing the facts, documents, emails, fact witnesses and expert witnesses will work to a party's advantage. Some industry leaders have proactively retained experts even though they have not been sued.

Parties should view their neighbors as allies and potential jurors. To that end, it makes sense to open a dialogue about fracking with the regulators on a local, state and federal level. It would also benefit the parties to engage the community and publicize information about the benefits associated with fracking, e.g., jobs, lower energy prices, cleaner energy, energy independence, etc. Certain midstream players have rolled out a public education campaigns aimed at that very goal.

Articles on shale gas and fracking adorn the front pages of the Wall Street Journal and New York Times. 60 Minutes runs stories on shale-gas drilling and the faux pundit Stephen Colbert discusses fracking's impact on his tongue-and-cheek news show. The promise of profits, domestic jobs and energy independence has the country talking about the gas shale plays that dot the landscape. Fracking and all that it encompasses will serve as the backdrop for a variety of legal issues during the foreseeable future.

Joshua W. Mermis is a partner at Johnson, Trent, West & Taylor in Houston, Texas, where he primarily practices in construction and energy litigation. He received his B.A. from the University of Kansas and J.D. from the University of Texas School of Law. This article previously appeared in the Spring/Summer 2012 issue of USLAW magazine.