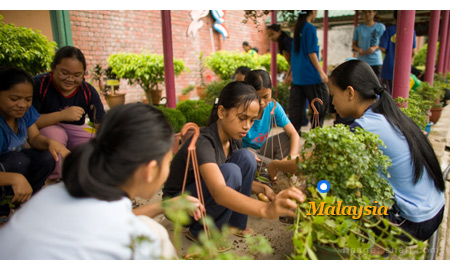 A key concern for many oil field workers, whether based offshore or onshore in a remote location, is how to maintain a family life – particularly if the oil worker has a young family.

For a worker based out of Aberdeen, Scotland operating in the North Sea is a straightforward deal: several weeks of well-paid work on a rig followed by a few weeks of quality time at home with the family.

Regular, quality time with your family becomes a bit more complicated if you are working halfway across the world from them. Oil and gas operations in remote locations often do not have the kinds of facilities nearby that are required by a young family.

However, some of the world's biggest oil and gas companies do make provision to ensure that even in remote operations they can maintain a family life.

Royal Dutch Shell has an Education Services division that oversees the education of its staff's offspring and even maintains nine 'Shell Schools' around the world that provide a primary education for children up to the age of 12 years old. There were, in fact, 10 schools as recently as last year, but one of the schools – the Damascus Shell School – was evacuated after Shell decided to pull out of Syria last December amid the turmoil.

Henk van Hout, Shell's head of Education Services, explained to Rigzone that his department oversees the company's education policy, which Shell sees as an integral part of its international capability.

"This is about our expatriate staff and their entitlements in terms of pre-school, primary and secondary education," van Hout said.

"We also give individual advice to Shell staff who are relocating or expatriating or repatriating. We support the HR part of the business whenever there is an issue with the education of our expatriate children. That might be about quality concerns or about children who can't get into schools because there is a long waiting list."

Part of van Hout's responsibility is to oversee the Shell schools.

One these schools, Piasau School, has existed in one form or another since the 1920s at Miri on the northwestern coast of Borneo. Shell discovered the first oil field on Borneo near Miri at Canada Hill in 1910; this was an onshore field that was active until 1972, when it was closed in.

According to Piasau School itself, the earliest record of a Shell school for expatriates at Miri dates back to 1922. In 1955 a new school was opened, but it was only in 1968 that the school took off in a big way with the discovery of nearby offshore oil and gas fields. Currently, Piasau has around 230 pupils and 24 teachers.

Van Hout explained that as Shell expanded to explore oil in remote locations like Borneo, the firm mainly employed technical staff from Europe.

"Our group before, and for a long time after, the Second World War, was predominantly English and Dutch. So families were expatriated to those locations and Shell was setting up everything: a camp, a hospital and also schools," he said, adding that schools such as Piasau originally held lessons in two languages: lessons in Dutch for children from the Netherlands and in English for English-speaking children.

However, during the past couple of decades Shell noticed that the make-up of its workforce changed significantly.

"It became more and more international and we moved away from the system having Dutch and English schools under one roof, and the schools became international schools," explained van Hout.

"That development started in the mid-1990s and, when we look at the 10 schools at the moment, all of them are true international schools. The one we have in Brunei (which I have been to myself) still has a significant Dutch stream of around 100 pupils but those children are getting Dutch lessons 50 percent of the time and for the other 50 percent they are doing the [English speaking] International Primary Curriculum."

Indeed, van Hout points out that the development of the International Primary Curriculum is something that Shell Education Services is "extremely proud of". This came out of the recognition that the English National Curriculum and Dutch curriculum did not apply to many of the children who were from places like Oman, Nigeria, China and Malaysia.

"So there was a need for an international curriculum and after talking to organizations like International Baccalaureate, Shell decided to start writing its own curriculum," said van Hout.

This was originally known as the Shell International Primary Curriculum, but Shell then decided to bring in a specialist educational consultancy to help it develop the curriculum further.

"We realized we are not in the business of operating schools and writing curricula, so we would rather that somebody else develop it and take a lead," explained van Hout.

Fieldwork Education Services, an organization founded in 1984, has been Shell's partner in developing the International Primary Curriculum, which is now used in more than 1,400 schools in 77 countries.

End not yet in sight for Shell schools

Since 1996, Fieldwork has also been responsible for the education management of all the schools operated by Shell.

Of course, Fieldwork has to answer to van Hout and Shell Education Services, which retains overall responsibility for the company's schools. But it seems that Shell will be unlikely to add to the nine schools it currently operates anytime soon due to the boom in the international education industry around the world in recent years.

"This is due to the fact that the world has changed," van Hout explained. "There are several commercial or non-commercial good quality school organizations in the world that we can [use] if we start a new operation somewhere remote."

Indeed, other oil majors these days generally handle the educational requirements of the children of their expatriate staff by outsourcing to international schools.

Shell itself is even divesting its interest in its school at Miri in Borneo.

"The official change of ownership will take place on September 1 this year. It is a company from Malaysia, actually, that is going to be owning and operating the Piasau School in Miri."

So, will this mark the beginning of the end for Shell schools?

"I don't think we're seeing the end of them just yet because there are a couple of schools that are in very remote locations, in the jungles of Africa and in the Middle Eastern desert."

So, it seems that when it comes to making a facility like a school work effectively in a remote, frontier location, the experience of a pioneering oil major like Shell is still very much required.