Musings: Latest Economic Statistics Are Not Good for Energy Market

Last Friday morning the anxiously awaited U.S. jobs report for the month of May was released to gasps of disbelief by investment professionals and politicians. The assembled economic prognosticators on CNBC's Squawk Box morning stock market show were debating their forecasts calling for anywhere from 125,000 to 165,000 jobs having been created by the American economy last month prior to the government's statistical release. The consensus estimate, as reported by the CNBC anchors was about 150,000-155,000 jobs. One of the CNBC forecasters had reduced her estimate in the prior 24 hours after Thursday's release of the ADP proprietary report of private sector job growth that suggested that only 133,000 new positions had been created last month. When the CNBC reporter read the release from the Bureau of Labor Statistics (BLS) saying only 69,000 total new jobs had been created, with 82,000 being private sector jobs while the public sector lost 13,000 jobs, everyone reacted with utter shock.

Not only was the job creation number extremely weak, but the BLS revised prior monthly estimates of employment growth lower. The March employment number was reduced by 11,000 to 143,000 and April's number was slashed by 38,000 to 77,000 jobs, barely above the May estimate. Other reported measures of the labor market's health were also weak in May as the unemployment rate ticked up by one-tenth to 8.2 percent as more workers re-entered the labor force seeking jobs. The average workweek for all nonfarm employees edged down by 0.1 hours to 34.4 hours in May. Significantly, the manufacturing workweek declined by 0.3 hour to 40.5 hours, and factory overtime declined by 0.1 hour to 3.2 hours.

The average hourly earnings for private nonfarm workers increased by 2-cents to $23.41, which was a positive. Over the past 12 months, average hourly earnings have increased by 1.7 percent. Unfortunately, for the 12 months ending in April, inflation as measured by the Consumer Price Index increased 2.3 percent. If we average the annualized inflation rate for the first four months of 2012, we have a 2.7 percent rate, which dwarfs the increase in annual average hourly earnings growth meaning that workers' real income has declined. Falling gasoline prices, as they follow crude oil prices lower, suggest American consumers are starting to get some cost of living relief, but it probably won't be enough to send them on a buying binge that would help jumpstart the economic recovery. It would also boost energy demand.

The bad economic news released on Friday continued the string of bad data released earlier in the week – a revised assessment of GDP growth in the first quarter of 2012, down to 1.9 percent from the earlier estimate of 2.2 percent; a report by outplacement firm Challenger, Gray & Christmas that there were 61,887 layoffs in May, the largest monthly total since September 2011 when 115,730 workers were terminated; and that the stock market declined in value by 6 percent in the month of May. Not only are U.S. economic statistics weak, but increasingly the data from other important countries around the world are showing deterioration. Take for example China, where the government's official Purchasing Managers' Index (PMI) that measures buying primarily by the large state-owned companies fell in May to 50.4, which was below expectations of 52.2 and marked the largest monthly drop in over two years. The reading, however, was still positive. Numbers of 50 or above indicate that the economy is in an expansion mode, conversely those below 50 signal contraction.

The PMIs for Australia and South Korea are also falling, and we have seen announcements by natural resource companies Rio Tinto and BHP Billiton that they are scaling back their plans to expand capacity in many of their mineral operations. Reduced capital spending by these companies means less equipment purchased and fewer new workers hired, which means less energy needed.

Everyone is well aware of the financial and economic turmoil in Europe. Virtually every country in Europe is either in a recession or close to entering one. This state of affairs is demonstrated by the Eurozone PMI charts in Exhibit 1 on the next page. In the regional chart, the Eurozone has the lowest reading. Within the Eurozone, Ireland is the only country with a PMI reading of 50 or above, signaling its economy is growing.

These weak economic statistics contributed to a dramatic stock market sell-off last Friday when the popular market indices fell by about 2.5 percent. Not only were stocks down, but crude oil futures dropped by over $3 per barrel taking WTI back to barely above $83 per barrel, down 20 percent over the past two months. As the chart in Exhibit 2 demonstrates, as crude oil prices began their slide earlier this year oilfield service stocks followed. 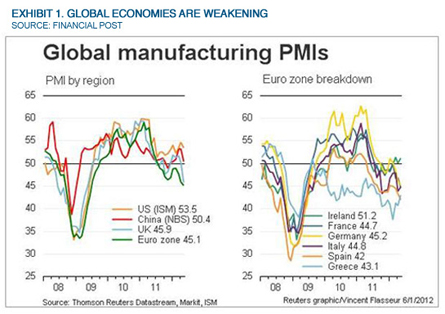 Last week, as oil futures prices declined by nearly $7.50 per barrel to close at an eight month low, or over an 8 percent drop for the week, the OSX was pummeled, falling by more than 7.5 percent. It was clear by the end of last week that investors expect the future for energy and oilfield service companies to be much more difficult than they had expected merely a few days prior. 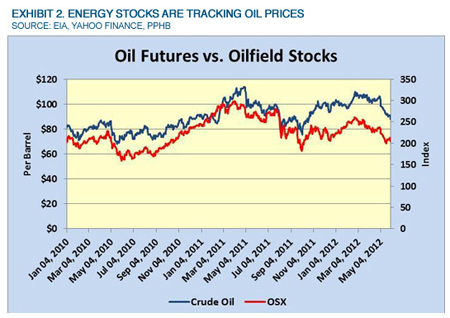 Weak economic statistics suggest falling oil demand in the future, which is not good for energy companies. To see what the growing economic weakness in North America and Europe has meant to global energy demand, one only needs to look at the change in the 2012 oil consumption estimate of the International Energy Agency (IEA) between its first forecast made last July and its most recent May projection. Globally, the consumption estimate has been cut by one million barrels per day. The Americas and Europe have both seen their demand estimates reduced by 400,000 barrels per day.

The demand cuts for those two regions were joined most recently by a cut to the demand estimate for Asia/Pacific. The Former Soviet Union is projected to see an increase in demand while Middle East consumption will fall by 100,000 barrels per day and Africa remains unchanged. Given the latest economic statistics from China and South Korea, we fully expect to see a further reduction in Asia/Pacific’s demand estimate. 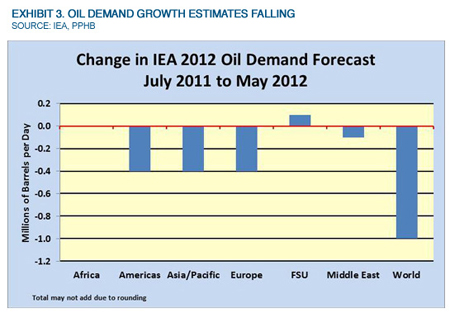 On a year to year basis, 2012's oil demand was initially projected to grow by 1.5 million barrels per day in July 2011, but now it is expected to increase by only 800,000 barrels per day. Since we have not yet reached the mid-point of 2012, we will not be surprised to see demand in 2012 increase by only a few hundred thousand barrels per day. If the sovereign debt crisis in Europe is not resolved in the next six months and the U.S. economic recovery doesn't accelerate, the weakening pace of economic activity in the Asia/Pacific region could contribute to little or no oil demand growth in 2013. That would seem to be what the stock market is saying, and would certainly present a challenge to the energy business.

Ernie Arrenegado  |  June 06, 2012
Well Hollywood and the Democrats have finally won less oil used and less pollution. Guess what else no jobs no money either.
Oilyguy  |  June 05, 2012
From what I hear (all over, not just in the oil patch) if there is a change in the White House in November, you will see a uptick in the US business activities. Obviously then the US economy will steer in the right direction (no pun.... okay pun intended). Europe will not be out of the woods but will inch toward a better place.