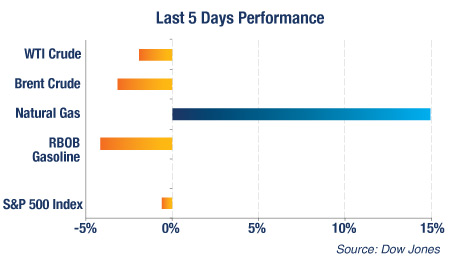 Natural gas was the big winner--gaining nearly 15 percent--over the past five days of trading. News early in the week that daily natural gas production for February in the lower 48 states dropped .6 percent provided an additional stimulus to a rally that had begun in the prior week. Opposite of natural gas, crude and gasoline prices pulled back with reformulated gasoline leading the charge lower.

On a year-to-date basis, reformulated blended gasoline futures (RBOB) continues to lead the pack. In the most recent weekly Spending Pulse report by MasterCard, gasoline demand fell 5.6 percent versus one year ago. Gasoline prices are now retracing their gains with retail prices averaging $3.84 last week and marking the first time this year that prices were lower than last year's levels. It certainly looks like the global markets are suggesting that a diplomatic resolution to the situation with Iran is more likely than a war. This could push prices for both gasoline and crude much lower considering the swollen inventory levels each possess. 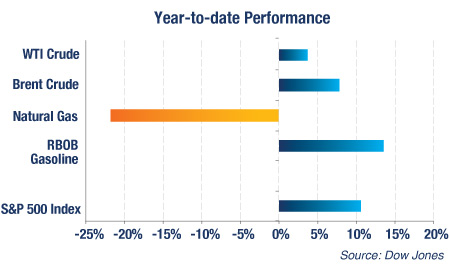