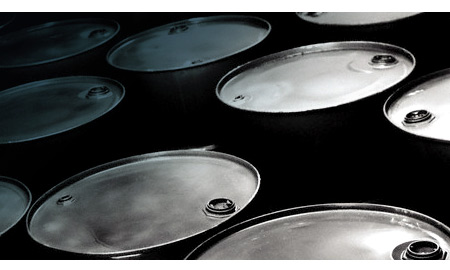 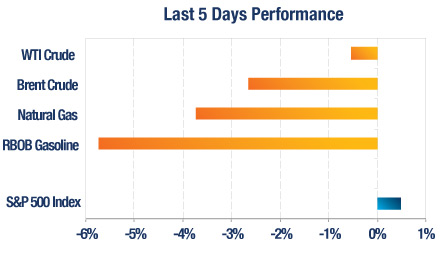 The past five trading days have been rough on the energy complex relative to the equity markets. Interestingly, the news regarding economic recovery is beginning to improve with European concerns abating. Taking the global economic picture off the table places the blame for softness in energy commodities on two things: a stronger U.S. dollar and a diminishment of the war premium. We would note that talks between Iran and global super powers over the past week have been characterized as "constructive".

Diary from the last five days:

In summary, front-month futures for WTI crude, Brent crude, RBOB gasoline, and natural gas all saw price declines over the past five trading days. RBOB gasoline, which lost 19 cents to settle at $3.15 per gallon Thursday, performed the worst. May futures on the NYMEX for light, sweet crude (WTI) were the least impacted, finishing 56 cents per barrel lower at $102.27 over the past five trading days. Brent futures were off 3 percent and natural gas fell 4 percent over the five days. With U.S. storage levels at 2.5 trillion cubic feet for the week ending April 13, 2012, nearly 58 percent above the five-year average, many are expecting natural gas prices to remain depressed throughout the summer and into the fall season.

On the whole, the energy complex faired worse than the broader equity markets as the S&P 500 finished trading over the past five days flat at 1376.92. 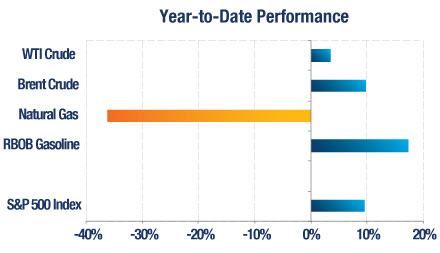