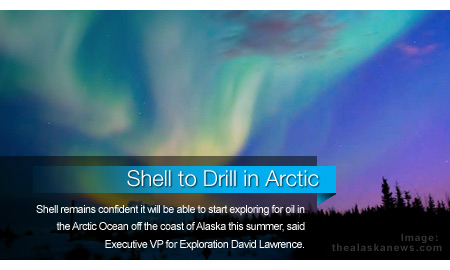 HOUSTON - Royal Dutch Shell remains confident it will be able to start exploring for oil in the Arctic Ocean off the coast of Alaska this summer, the company's Executive Vice President for Exploration David Lawrence said Wednesday.

"As long we continue to meet critical milestones we will drill thise summer," Lawrence told Dow Jones Newswires in an interview in the sidelines of IHS CERA conference in Houston.

Shell has been seeking permits to drill in the Beaufort and Chukchi Seas off the north coast of Alaska for several years and has spent more than $4 billion to prepare for exploratory drilling. The company has already obtained several key approvals but it still needs to cross several more regulatory barriers before it will be permitted to begin drilling in July. It also faces opposition from several environmental groups.

Shell will continue pursuing exploratory drilling in Alaska because it's one of the most promising areas in the company's portfolio, Lawrence said. "When you look at offshore Alaska you are looking at 25 billion barrels of oil 120 trillion cubic feet of gas, so it's a major resource that can compete in any arena we look at globally," Lawrence said. "It's the size of the prize."

Drilling in the Alaskan Arctic "is relatively easy" because it's done in relatively shallow waters and under relative low pressure and Shell already knows a lot about the region's geology, Lawrence said. "We have a resource that is able of transforming the energy picture in the Americas."

Additionally, if oil is produced from the Arctic Ocean, "it will be critical inflow to keep the Trans Alaska pipeline running," Lawrence said. "That is a vital link in our U.S. energy security system."

Shell is has spent years "assuring itself" that it has the best drilling plan in place for the Beaufort and Chukchi Seas, Lawrence said. "We wouldn't be there if we don't think we can do it safely."

As part of Shell's interest in the Arctic, the company is also open to explore for opportunities offshore Russia. "There are opportunities in the Russian Arctic, and those could be of interest [for us]," Lawrence said.

Separately, Shell's interest in buying Cove Energy PLC, the junior partner in a potentially huge natural gas field off the coast of Mozambique, reflects the company's beliefs that area seems to be very promising and it could become a place where Shell can apply its extensive experience developing liquefied-natural-gas, or LNG, projects, Lawrence said.

The executive declined to comment on the negotiations or on other acquisitions opportunities in East Africa.

Ryan Tasma  |  March 08, 2012
I work on the drill ship that Shell has lined up for this project. We have already met resistance from GreenPeace. These wells will be under close public eye! We are all optimistic about the project.
Chris J. Tadda  |  March 08, 2012
Great News for Alaska and U.S.A. Many here Welcome Shell back to Alaska!
Harold  |  March 08, 2012
Drill baby Drill
RELATED COMPANIES
Company: Shell more info
Company: Cove Energy plc more info