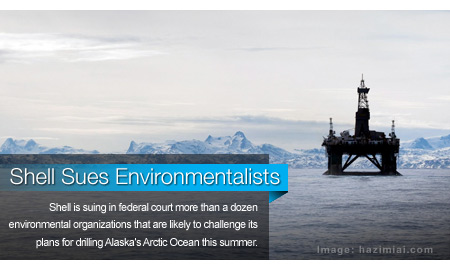 HOUSTON -- Royal Dutch Shell PLC is suing in federal court more than a dozen environmental organizations that are likely to challenge its plans for drilling Alaska's Arctic Ocean this summer, an unprecedented preemptive move aimed at avoiding potentially costly delays.

The oil company filed a petition Tuesday for declaratory relief in the U.S. District Court in Anchorage, Alaska, asking the court to rule that federal regulators complied with the law last month when they approved Shell's oil-spill-response plan for exploratory drilling in the Chukchi Sea. Drilling in the area is scheduled to start in July.

The suit names the Center for Biological Diversity, the Natural Resources Defense Council, Sierra Club and 10 other organizations that oppose drilling in the Arctic or believe Shell's oil response plan is insufficient. These organizations have filed lawsuits and appeals in the past challenging the U.S. offshore leasing program offshore Alaska.

"Forcing [Shell] to wait until the last-minute challenge these defendants are sure to make creates tremendous uncertainty regarding [Shell]'s ability to proceed with its approved exploration activities in the Chukchi Sea in 2012," the company said. "Rather than await the inevitable last-minute challenge, [Shell] affirmatively brings this declaratory judgment action so that it may expeditiously receive judicial review."

The action, which Shell and legal experts said is unprecedented, doesn't seek to restrict the environmental organizations from challenging the company's oil spill plans, but to make sure any challenges occur "sooner, rather than later," the company said.

Some of the environmental organizations being sued said Shell is trying to short-circuit their right to review the oil-spill-response plan and suppress public participation in the process.

"It's a case that doesn't have substance under federal law," said David Pettit, a senior attorney with the Natural Resource Defense Council. "We will file a motion to dismiss and we expect to win quickly."

Jamison Colburn, professor of law at Penn State University, said Shell has a slim chance to win the case because federal law already defines the process to challenge and review permits.

Even if Shell wins the case, defendants can file a challenge to the company's drilling plans in other district courts, and organizations that weren't named as defendants could file their own lawsuits, said Tracy Hester, a environmental law professor at the University of Houston. "This doesn't offer a rosy picture for a clear judicial ruling that will allow drilling to proceed on schedule this summer," Hester said.

But Shell could benefit even if the case is dismissed. Losing the petition for declaratory relief gives Shell a powerful reason to ask Congress or the Obama administration for some type of intervention or relief, Hester said.

Shell said it already has invested more than $4 billion purchasing leases in the Chukchi Sea and Beaufort Sea, in 2005 and 2008, respectively, without being able to drill a single well. Both areas are considered among the last frontier areas in North America with potential to hold significant source for oil and gas. The leases have an expiration term of 10 years.

"With time running out on a multi-billion [dollar] lease, it's not surprising Shell is pulling all the stops," Hester said.