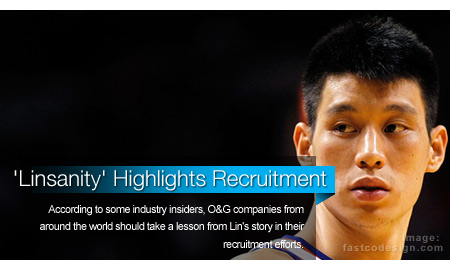 The hoopla of New York Knicks guard Jeremy Lin is well-known -- a basketball player who was overlooked and underestimated by a number of colleges and professional teams until his performance during a Feb. 4 game at Madison Square Gardens turned him into a star.

Lin's efforts to improve his game since leaving Harvard University in 2010 show that with hard work, a player who was previously not thought of as a standout could defy expectations.

On the surface, Lin's story and the oil and gas industry would not appear to have anything in common. But some industry insiders say that oil and gas companies should take a lesson from Lin's story in their recruitment efforts.

Despite a shortage of workers, the oil and gas sector has not done enough to recruit workers from other industries, and in doing so, could be overlooking potential stars that, though they may not know industry jargon, could potentially go far in the industry.

According to one recruiter, project managers at some companies are still reluctant to look at workers from outside the oil and gas industry, despite the need for more workers and interest from qualified candidates from other fields. From a recruiting standpoint, this reluctance makes the already small pool of workers available at a time when the market is open and hot even smaller.

While some oil and gas companies have expanded their pool of potential workers by seeking to recruit former members of the military and former NASA employees, efforts made so far are still not enough to satisfy labor demand.

"We've been fighting for years to get project managers to look at workers with similar skills from other industries," said Angel Smith, lead international and Americas recruiting manager for Wood Group Plc.

For example, a company looking for an accounting manager may say they want somebody with oil and gas experience, but at the end of the day, what they really want is somebody with a finance background, Smith noted.

While some positions such as rig managers do require workers with several years of industry experience, some jobs such as mechanics or interoffice corporate employees could be filled by workers from other industries.

"They may not understand oil and gas terminology, but they can learn," Smith commented.

Despite rhetoric touted by industry officials that oil and gas companies need to do more to recruit workers from other industries as well as recent college graduates and high school students, recruiting efforts made so far are not happening across the board as much as Smith believes they should.

What should you do if you're looking to enter the oil and gas industry?

Smith advises jobseekers to examine the skills required and see what experience they have that closely matches that job. A mechanic who has worked on Rolls Royce engines in another industry can put that skill to use in the oil and gas sector.

Lack of time to train new recruits on oil and gas basics is one reason that project managers have been reluctant to look outside the sector, Smith noted. While Smith understands time can be an issue, she still believes more can be done for training.

Only seeking out job candidates with oil and gas experience means the process of filling a position will take longer, said Abhijeet Narvekar, co-founder of The FerVID Group, a Houston-based executive search firm that uses a technology-driven, expert-led recruiting solution.

However, engineers from the petrochemical and automotive industries who understand process knowledge in the supply chain have skills that can be applied to oil and gas.

"They might need training on terminology, but [training] would allow companies to find people much faster," said Narvekar.

Companies looking to hire only experienced oil and gas candidates may be doing so because they are unsure how long it will take to train a worker from another industry, or don't want to hold someone's hand. Still, Narvekar sees great opportunity to bring in engineers from California to work in the oil and gas industry, adding that high-tech companies in Austin are already doing so.

"They might need training on the terminology or the methodology, such as the scale of projects, which is different for building automobile versus drill bits, or the temperature or pressure, but a good engineering background can overcome this lack of experience," Narvekar commented.